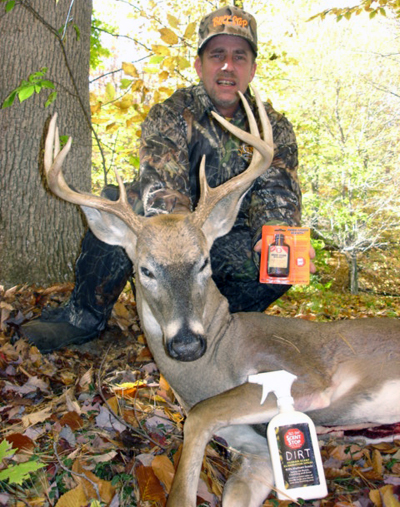 Buck Stop owner Brian Johansen scores on a 8 pt that responded to scents and rattling antlers.

Being a business owner of a company that produces deer hunting scents and lures you would think I would have lots of time for hunting. Wrong.

This is a really busy time of the year, so my hunting time is at a premium but on Oct 13th I finally found time to slip out for a morning hunt. Before daylight I had a buck grunting and chasing a doe through the corn field and woods beside my home. I never saw him though due to the early hour and lack of daylight. It was a great morning to be in the woods but I had to hurry to get to work where I spent all day thinking about that buck chasing that doe. The weather turned bad before noon with heavy rain and wind and the leaves were dropping like crazy.

I kind of had a plan laid out for a evening hunt, I figured that the bucks would really be running their scrape line to remove the leaves and re-mark the scrapes after the rain. I had some small items to take care of after work so I was not able to head out to the stand until 5pm.

The wind was perfect for one of my favorite stands that I have not hunted in 2 years. I jumped 2 doe’s while walking in to the stand. This stand is located in a 3 way corner of a fence line with a corn field on the west side, a freshly planted winter wheat field on the north side and an over grown fallow field with rows of 15 year old pines planted in bands across the field to the east. I have a road mowed around the fallow field for easy access.

After spooking the doe’s on the way to the stand I was thinking ‘Oh great’, not a good sign at all. The doe’s ran in to the corn but did not snort which was a plus.

I was surprise by the large number of scrapes and rubs that had appeared during the last month as just about every overhanging branch over the road had a scrape under it. Then 20 yards from my stand there were 2 nice size scrapes and a pretty nice rub. Good sign.

Now after not hunting this stand in 2 years it needed brushing out so as quietly as I could, I opened up a couple of shooting lanes. Finishing up I place a scent wick near the rub treated with Buck Stop’s New Guide Grade Scents Doe-In-Heat. I also reapplied some Buck Stop DIRT masking scent on my boots.

Climbing in to the stand I had some limbs to remove there as well. At 5:30pm I was settled in and really starting to enjoy the fall colors, watching the geese flying above and listening to sounds of the woods. It was just a great night to be out hunting. At 6:30 I started my rattling sequence with a light sparring rattle. This lasted about 3 minutes and in just minutes, a doe and fawn trotted out of the corn field. COOL! They milled about for a short while and then headed out into the fallow field to feed.

About this time the wind started to pick up and it was totally wrong for this stand. Bummer. I figured the hunt was going to be a bust with the wind coming out of the north. During a lull in the wind I picked up the antlers and rattled again, a little longer this time. Just about the time I was thinking about hanging the antlers up I heard a corn stalk break, looking behind me I saw a nice buck walking toward me.

I hurried and hung the antlers in the tree. Grabbing my bow my heart just pounding in my chest. Love that feeling. The bucks course was taking him downwind of me. He passed through the fence line 30 yards downwind of me intently looking for the 2 bucks that he heard fighting. He continued to circle me until he was directly down wind of the rub where I had placed the Doe-In-Heat scent. It was like he ran in to an invisible wall. He stopped and immediately started doing the lip curl smelling the scent. He then began walking forward to smell the scent wick and gave me a good shot.

I have known for years that the best time to use “Estrus” type scents is the 2 weeks or so before the actual breeding phase of the rut kicks in. At this time the scent you put out is the only source of the scent a buck is seeking making scent usage more effective.
For more go to: Buck Stop Scents & Lures