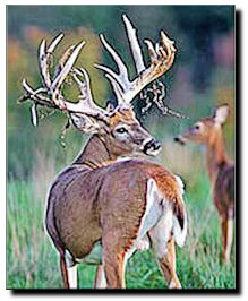 I learned a long time ago that there are very few truly original ideas. Even if you’re convinced you have one, chances are that somebody, somewhere has at least given a passing thought to it.

Just the other day, I happened to mention to a fellow editor here that my own must-have list of deer gear is a short one. I won’t reveal everything in this post, but it includes the earth-scented dryer sheets now packaged by Hunter’s Specialties.

“You know, that was my idea,” he said, eyes ablaze with pride. And it was, even though he never took it to the hammer-and-nails stage. But a couple of guys in Pascagoula, Miss., did take it that far, even earlier. Now the sheets are in Wal-Mart bearing the H.S. name. (I have no clue as to whether H.S. bought the idea from the Mississippians, who bagged foam rectangles, or whether the company merely ran with the idea, since theirs are more like Bounce sheets.)

I’m always on the lookout for those greatest-things-since-sliced-bread products. That’s how I came to add scented candles to my must-have list. I was already a huge fan of Tink’s #69, after interviewing dozens of hunters who shot monster bucks and swore by it.

I met Bill Moore at a deer show in Tupelo, Miss. His was a one-man booth, and the Texan was peddling “Hot Trails” scented candles. I thought the idea was cool as grits, so I wrote about him. But it wasn’t until I actually used them that I fell in love with the fragrant little jewels.

I have many stories about the candles I’ve used, including tales about deer bedding down within mere feet and downwind of them. But the coolest was when a mature doe actually stuck her nose to the thing and burned it – directly underneath my treestand! 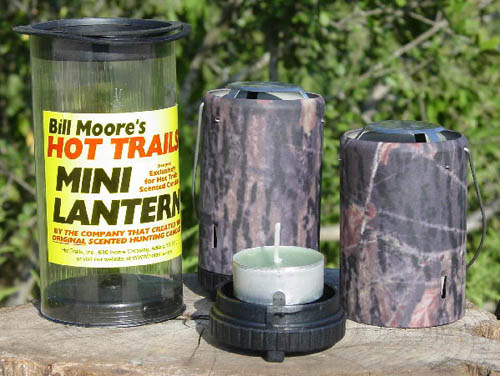 Here’s what I think: Bill’s candles not only put deer at ease, but they also trigger a whitetail’s curiosity. And because he’s come up with a dandy little self-contained burner (so you don’t set fire to the woods), all you have to do is light it and either hang it from a tree limb or lower it to deer-nose level on your bow’s pull-up rope.

I’ve seen only one other company (in Missouri) advertising and selling scented candles to hunters, but they pretty much stick to non-offending cover scents. And they don’t recommend using them in the woods. Bill’s candles include an estrous doe scent, and the little mini lantern makes them safe for using in the field (it even helps prevent the wind from extinguishing the flame).

I gotta say, folks, that Bill Moore is not my cousin. I’m getting no kickback. Beyond the four little candles he gave me back in the early 1990s, I’ve paid for all others. As for Tink’s, I count Terry Rohm as a good friend. But I was buying Tink’s #69 long before I met him.

Right now seems a great time to tout the Hot Trails candles, especially since a few states and Canadian provinces have or are considering banning the use of real urine by hunters out of fear of spreading chronic wasting disease. Using candles, scent bombs or incense (Tink’s “Smokin Sticks”) makes perfect sense. Just be sure to buy the holders.

For more go to:  Hot Trails
For video go to: Hot Trails Video

Do YOU have something you’d like to say about HOT TRAILS. Just e-mail us at bmoore@hottrails.com
HOT TRAILS WORKS AND WILL HELP YOU
GET YOUR TROPHY!!!