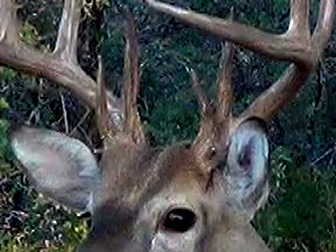 Got to my ground blind half an hour late and took a seat. I like to sit quietly and soak it all in for a few minutes before I get ready to hunt. While I was soaking, two does walked up from the nearby woods to the left.

It’s always a good thing to have does hanging around where you are, they just might attract a buck or two. Oh oh, I noticed a deer at the edge of the gully to the east. I turned on the video camera and took its picture.

Then I focused the Leupolds on him. Unbelievable, it was the buck in the picture this morning. 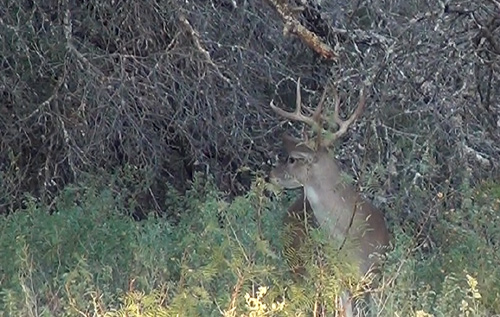 After several minutes of watching the area he started walking … towards the does that were over where I was. 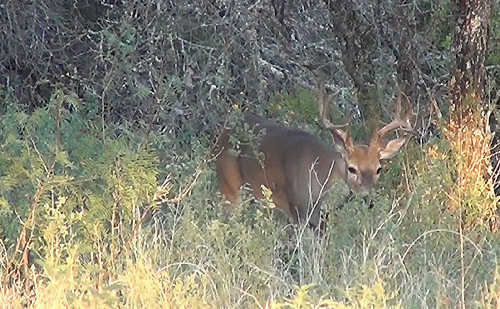 He walked out of the trees and continued this way. He stopped and checked the area around him several times as he came. 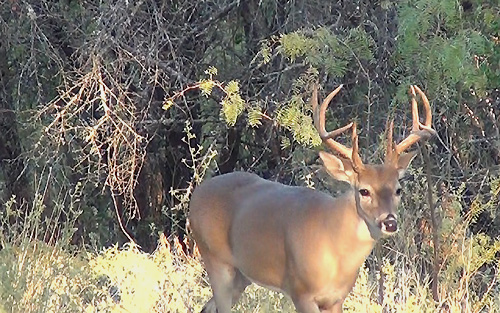 He walked by my game camera and came up by a deer that was about 35 yards away. 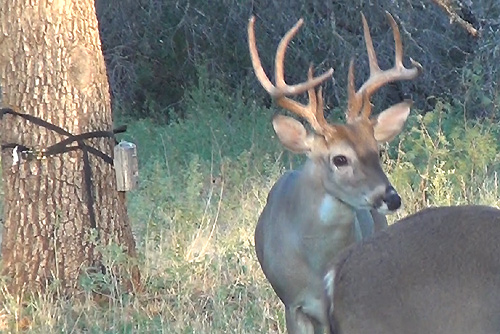 Here is a close up of his brow tines. They are very cool. 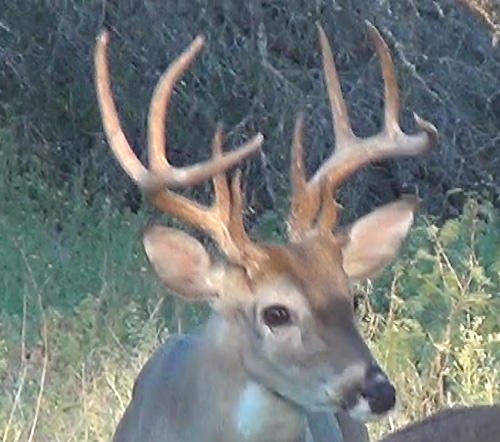 He cane directly up to a young buck and starred him in the face. 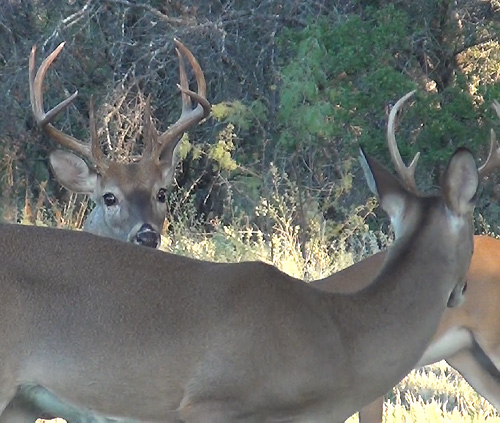 The young buck felt the threat and moved out of the way.  Two does waked behind him. I noticed that his left front leg had a knot on it. It didn’t bother him in any way and it was from something that happened year’s back. 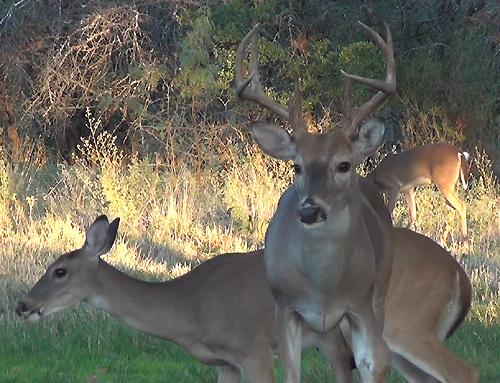 He turned around and investigated the furthest doe, a young one. This buck was more than I expected. He is mature, and when seen side by side with the other deer, he is much heavier, larger and longer. And his Freak brow tines are unique. If I got a shot opportunity on him I was definitely shooting. 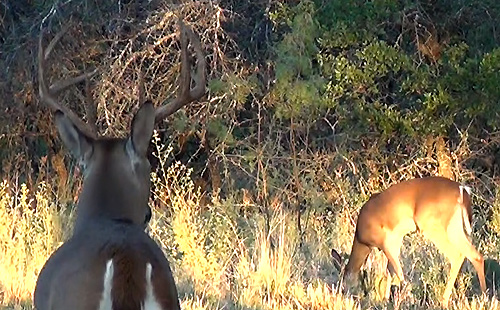 Then he walked over to the food plot and looked around. Then something totally unexpected happened. My partner Rich Walton called me on the cell phone.

Normally I turn the ringer off when I hunt, but today I forgot to do it. And worse, the ring tone I have on the phone is a dog barking. 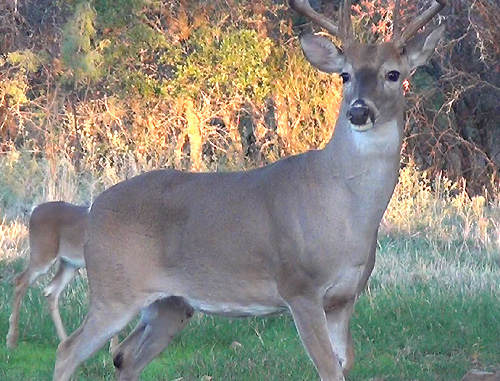 He turned around. The doe already appeared to be leaving. 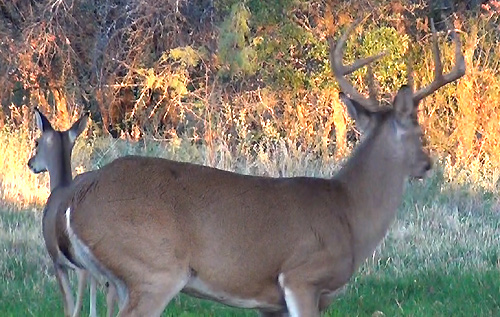 He walked around nervously and kept looking for the source of the barks. 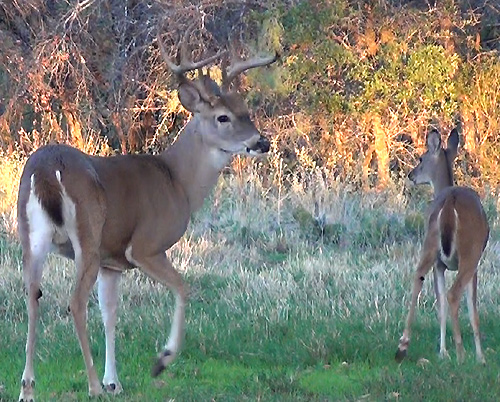 The sound had him in another, more cautious, mood. 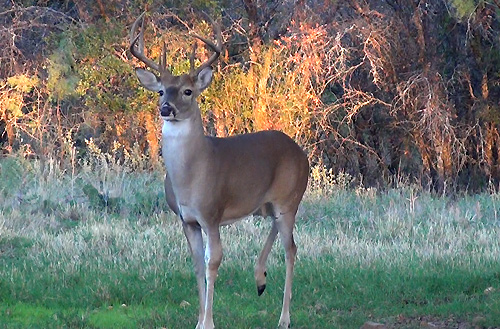 And he exited stage right. 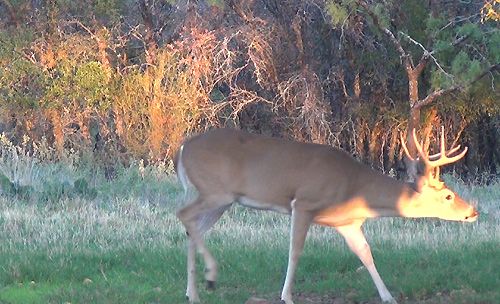 It was awesome seeing this buck. Here is a closer look at his brow tines. 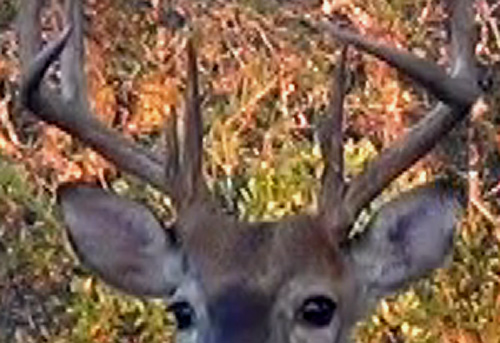 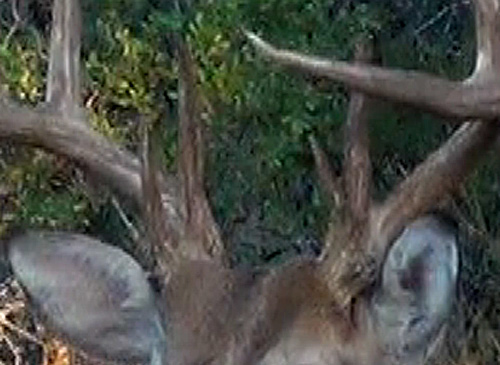 And a different angle. 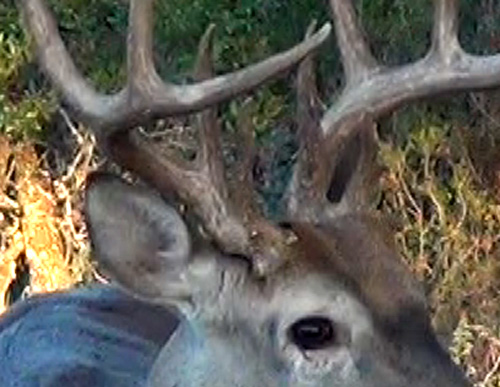 I don’t know about this stuff but the extra protrusion on the left of his head might be another main beam.

Maybe I will run into him again.

Many Thanks to the Bowhunting.Net 2011 Bowhunting Deer Sponsors:
Previous Post