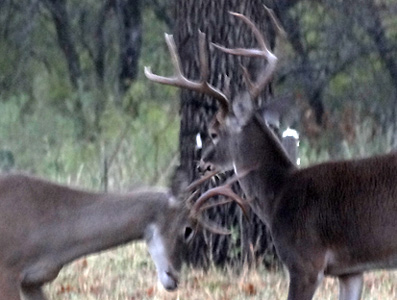 I was lots of sleepy this morning but I still got up and went out to my food plot blind. The recent gully washer rain storm not only put flowing water in our dried up river it did great things to my struggling (because of this year’s drought) food plot.

Deer shadows walked into the plot before sunrise but didn’t stay long. When it was light enough to see a deer and check it out with my Leupold’s I saw 6 bucks in the immediate area. Four were mature and two were big boys. The other two were young bucks and they were sparring.

I waited. The light improved.

The two bucks switched over to a real fight just as my camera was able to take a picture in the low light mode. They were fighting near my game camera that you can see on the tree to the left. 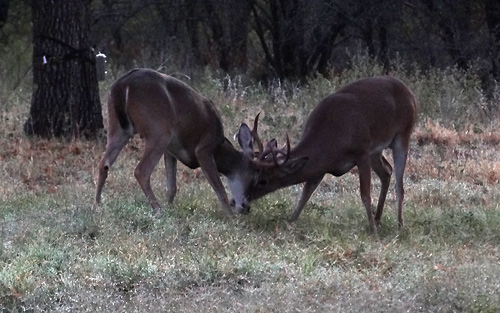 Apparently the skirmish didn’t set well with the biggest 8-point. It watched them for a moment and then hurried over to the two bucks. They stopped their fight when he got there. 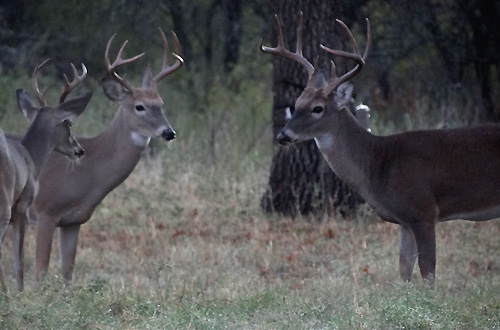 The largest of the two young bucks postured that he was willing to fight with the new buck. It must have seemed like a good idea at the time. 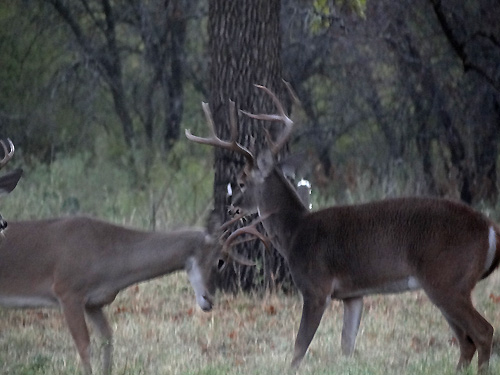 The young buck stepped closer to the bigger 8-point and the 8 put his ears back.

And went to work. 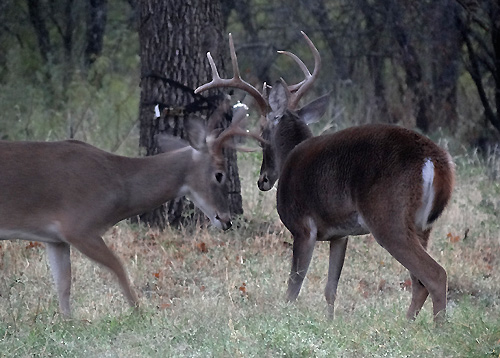 Wham. The 8 locked the young buck’s antlers up and bashed its head hard. And tried to yank its head clean off. And then spun it around like a rag doll.

When the 8 let him go there was no more confrontation, the youngster skedaddled.

Then the 8-point walked into the woods to the north.

I got one more picture — of the other mature 8-point. 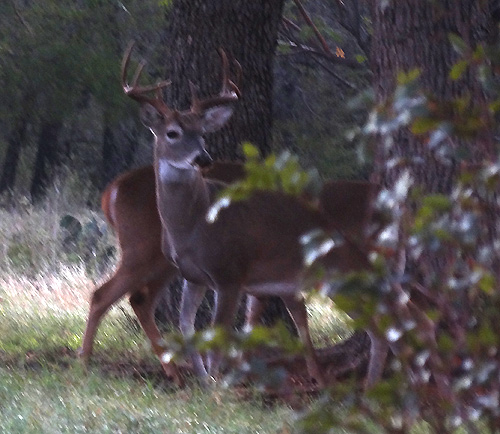 The bucks went away and some does came to the food plot. They weren’t there long and when they left I went back to the house.

My hunting buddy John Askew arrived in time for the afternoon hunt. He hunted the Gate and I went to the Point. I saw one more deer than John did, one sixer.

Afterward we drove to Storm’s Hamburgers in Hamilton and after eating a great hamburger we were greeted by a flat tire. John has a new SUV and it took longer to find where they hid the jack than to change the tire.

Meanwhile, by buddy Robbie Cramer arrived at camp. The Duck is also down for the weekend hunt.