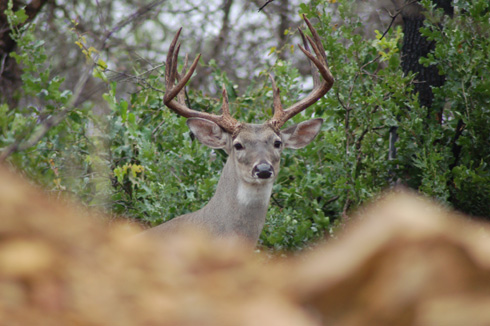 A big, mature whitetail buck is the goal of most bow hunters. Luke encountered this big eight pointer up in Jack County at Squaw Mountain Ranch. Photo by Luke Clayton

It’s amazing just how quickly seasons roll around. Whitetail archery season is again at hand and those of us that enjoy the challenge of getting up close and personal to game will be heading to the woods with our bows.

Through the years, I’ve packed my Mathews Bows from the wilds of Canada to Mexico in quest of big bucks. I remember well the highlights from many past hunts, such as the time I was sitting on a bow stand on the edge of a creek in the big buck country of south central Illinois. I will never forget the sight of that flock of mallards dropping straight down just at dark into the tranquil waters of the little creek, silhouetted by a full moon. Legal shooting time was gone and the big buck I’d been watching spooked just as the mallards hit the water.

That first 7 pointer I harvested near Groveton, Texas years ago while hunting with my long time friend Mark Balette is also firmly etched into my memory! The 3.5 year old sported a ‘basket’ rack and would never have become a truly ‘trophy’ buck, at least not in inches of antler, but he was a trophy to me. He was harvested after much, much, devoted practice and I was more proud of him than some much larger bucks I’d taken with a rifle. The sound of the buck spreading the strands of barbed wire as he entered the little oat patch will be engrained in my memory banks forever; so will just about every other facet of my first successful bow hunt.

I’ll also long remember the big North Dakota buck I watched through binoculars a mile away, that eventually came to within bow range of my little ground blind and stood broadside long enough for me to make a good shot. I’ve taken my share of good bucks and had far more teach me lessons in patience, perseverance and humility. There is absolutely nothing that will humble a person like the challenges of bow hunting. Just last season up in Jack County at Squaw Mountain Ranch, I harvested the biggest antlered buck of my bow hunting career, a fully mature old mossy horn non typical that scored 157 PY inches.

I’m making plans to be back in those rugged hills early this season in quest of another bruiser buck. But, bow hunting is much more than the size of antlers of harvested deer, it’s the unabridged joy of being out in the woods in the fall when leaves are beginning to change colors and most mornings have that ‘nip’ in the air. It’s that pungently sweet smell of decaying vegetation and the sounds of early migrating geese overhead. The woods are getting ready to go dormant for the winter and deer are feeling the early stages of their annual urge to procreate.

Back several decades ago when I first took up hunting with a bow, I truly thought a successful bow hunter needed to possess the shooting ability of Robin Hood and hunting skills of Nimrod. Granted, harvesting deer with archery tackle is by nature far more difficult than hunting with a rifle or muzzleloader, but a look at the ever increasing number of Pope and Young record book entries each year proves that bow hunting success is definitely on the rise, thanks I believe to increased knowledge and much better archery equipment. I go into each bow season fully expecting to put meat in the freezer and possibly a big buck on the ground and, like many modern day hunters using state of the art archery equipment, I am usually successful.

HERE’S SOME TIPS THAT I BELIEVE WILL MAKE YOUR NEXT           BOWHUNT MORE SUCCESSFUL:

SHOT PLACEMENT- Harvesting game with a high velocity rifle bullet is far different than using an arrow tipped with a fixed or mechanical broadhead. I wait for slam dunk shots that I know that I can make and pass up ‘iffy’ shots. Broad side or slightly quartering away shots offer the best opportunity of a clean harvest.

FIXED BROADHEAD OR MECHANICAL- I shoot a fixed broad head with a hollow chiseled point made by Clean Shot Archery but there are many, many quality broad heads, both mechanical and fixed, on the market today. The Spot-On broad heads I use begin cutting the instant they impact hair/hide. The hollow tip with 3 very sharp chisel points opens a devastating wound channel for the 3 blades to slice through. With good shot placement, a properly designed broad head harvests game every bit as quickly as a rifle bullet.

Regardless which type broad head you choose, make sure and shoot it enough to learn its point of impact at various yardages. My fixed blade broad heads have a slightly different point of impact from the field points. During hunting season, I adjust my sights to perfectly suit the flight of the broad heads and use practice blades (the blades are removable and replaceable) when shooting at targets.

LEARNING ‘WHEN TO DRAW’- The act of actually drawing a bow when deer are close is one of the most challenging aspects of bow hunting. Deer are extremely ‘wired’ and are highly sensitive to sight and sound. Movement is necessary to bring a bow to full draw and the challenge is drawing when undetected. I’ve learned to watch the animal’s body language closely and draw only when the animal is looking away or has its head down feeding. The Mathews Z7 Extreme bow I hunt with offers 80% let off. I have the draw weight set at 63 pounds, but when the cam on the bow breaks over, I’m only holding 12.6 pounds, something I’ve done on past hunts for a couple of minutes until the deer presented the right shot angle.

TRACKING- Deer often run out of sight after the shot and learning to follow the trail is a major part of successful bow hunting. Unless you actually see or hear the deer go down, it’s a good idea to wait at least 30 minutes before taking up the trail, longer if you know the shot was less than perfect. Just because there is no blood at the sight of impact, don’t assume the shot was a miss. Deer often fun a few years before leaving a blood trail. When there’s someone around to help with the tracking, it’s a good idea for one person to follow the blood trail and the other get our ahead in the general direction the animal is traveling and walk in a circular route, this method often results in a quicker recovery.

Listen to Outdoors with Luke Clayton radio at www.catfishradio.com.

Email Luke with hunting and fishing news from your area via the web site.