This summer it has really been hot as well as rainless. For the last few weeks I’ve dumped water in some low spots in my food plot hoping it would help green up the struggling plot. Before daylight this morning I saw that water in a whole new way.

In the easing darkness the surface of the water took on a shine. And deer shadows moved into the plot and went right to the shiny water and began to drink. It was still very low light and I could barely see their shape. I checked them with my new Leupold binoculars and was pleased that I could make them out much better. So far every deer was a buck and four of them looked nice and big.

Daylight improved enough that I though I could video in a few minutes. I set up the tripod and pointed the video camera toward the bucks and waited for better light. Right now there were 15 deer. Ten were bucks.

A few deer looked toward the edge of the woods and directed my attention there too. In a few seconds I saw wild hogs inside the tree line. Two things happened.

All the deer ran off.

And the hogs ran over and started drinking my shiny food plot water. \

I switched my video camera on and waited until there was enough light to video. It didn’t take long. Below is some of them. Notice how the surface of the water shines. 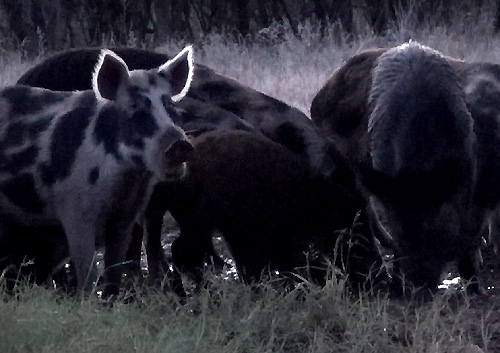 They group of hogs was all clumped up and pushed each other around to get at the water. It was a real side show. I nocked an arrow and waited for the big spotted boar in the back left of my pic to move where I had a clear shot at him.

I, and the wild hogs, heard loud metallic clanking. It was something the neighboring ranch’s cattle workers were bringing in on trucks.

Now I am far enough from the road that I can’t see vehicles on it and normally they can’t be heard. But this was very loud. And the hogs ran back where they came from. Soon it was real daylight. I’d seen plenty of deer and wild hogs this morning but there were none in sight now.

Later my hunting buddy Robbie Cramer texted me that he had shot a wild hog. I drove over near his stand and we took up the trail. A group of wild hogs came through the area Robbie was hunting. From their description they sounded like the hogs that had visited me.

There was a good blood trail and it led us into the nearby trees.

There was a prominent blood trail so, other than watching out so we didn’t get a sharp stick in the eye, walking through these cedars and scrub trees, the tracking job was short and sweet. Robbie’s hog was laying by a dried up creek. (Notice all the eye sticker trees and brush the hog led us through.)

Robbie shot this spotted, long nosed wild boar with his Bear SQL bow and the 2-inch cut Grim Reaper broadhead. He was hunting in a tripod stand and wore Sticks N Limbs camouflage. The bow and broadhead put the hog down quickly  and the camo kept him from being seen by the group of hogs that came by him.