Passing On Our Tradition and the Guy Who Shot My Buck 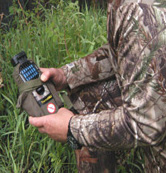 Hunting up in my neck of the woods ensures one thing; flying bugs that bite. After my initial field test of the ThermaCELL line I can tell you, I never hunt, or go outside during the warmer months without my ThermaCELL.

ThermaCELL is made by The Schawbel Corporation and is the best, most versatile Mosquito Repellent available today. The units also come with a carrying case and I can assure you that any time you hunt, fish or camp during the warmer months, especially spring Bear or Turkey when the bugs are thick you never leave home without ThermaCELL in your pack. The units are light, portable, scent free, easy to use and quiet.

ThermaCELL puts out a barrier against insects between 15 feet and up to 20 in some cases. The invisible barrier is scent and works much better than having to use stinky DEET solutions. It takes the entire outdoor experience to the next level in an effective and simple manner with advanced technology and does so with a repellant that is safe to use.

While I use the Hunting Appliance in the field I rely on the repellant lantern in camp and around the back patio. The Patio Lantern also has a hanger and built in light which is nice during the early morning and evening times.

The ThermaScent Platform and refill kits.

ThermaCELL also, in addition to keeping mosquitoes and other biting bugs off you, offers ThermaScent which utilizes the same appliance but the pads are unprocessed allowing you to apply your own scent/lure product. When turned on the unit applies heat to the lure pad and allows that heated scent to ride on the breeze. I took a small 12 point with the help of my ThermaCELL unit. I would say it is more effective than a lot of scent dispensing systems out there as it gets scent out on the wind and can last up to four hours. I use Wildlife Research line up of attractants personally as they are effective. Tinks69 works also works well. You can use whichever lure works for you but I do recommend the line up attractants from Wildlife Research Center it works for me. ThermaScent

Back to my story; one day last November I was out on a perfect afternoon and the rut was in full gear. The afternoon settled well with a snowy front suddenly appeared and makes things even quieter. The wind was in my favor and the huge 8pt with a body mass of a cow that would score 160 easy that I was after was about to come into range. I knew his movements and I just knew that he would come right to me in my shooting lane and it would be done. As it starts to get dark I see a few does, a very small buck and then a small 6 and 12 point about 100 yards away. I’m watching and suddenly KABOOM thunk that ‘deer gets hit’ sound. You know the sound I am talking about and my gut is saying NO NO NO! Well, a young hunter out on his first hunt and not much experience other than having a good shot, shot what was I thought was my buck.

I felt bad for a minute knowing he had just circumvented my plans and taken my buck but then, I was that young man once and that same thing had happened when I shot my first buck. I walked over and saw the boy and the deer and it was almost dark. I congratulated him on his fine shot and great buck and learned his father was on route. The boy was in a portable wooden stand with no harness on and just set up by chance because there was word of a big buck. The boy got lucky but more so because he had not fallen out of the stand with no Safety Harness on. He saw me and started to come down but the snow on the ladder made me nervous seeing him coming down so fast. He made his rifle safe and then quickly went to the deer. The look in his eyes was priceless. I shared my feelings of my first buck with him and we connected. That was cool and what I love about hunting. We talked and he knew who I was and said, “Aren’t you that Mossy Oak guy that does events and harps about safety and give things out at hunting events?” I told him I was and then helped him drag his buck out to his dad’s truck.

I shared what I had in my pack with him and gave him my HSS vest and told him that he would get more deer with that safety harness on than without it as it would keep him alive long enough to hunt. I also gave him my ThermaScent and that blew him away as well. After all, if he really wanted to be a successful hunter that ThermaScent would be a huge help. I made sure he and his dad went home with all sorts of goodies. He may have taken the buck I had been waiting for but I made a new hunting friend and convinced him that treestand safety was the single most important part of hunting. The HSS Vest would certainly keep him healthy and hunting while ThermaScent would take care of bringing the deer in.

I look forward to seeing him and his dad again. We all very often neglect how important it is to pass along our hunting tradition to family or friends and to protect and conserve and to respect others in the woods and life in general. That was a moment last fall that really put things into perspective for me. I am so grateful that I can give back like I did that day and look forward to my daughter Madison when she his ready to start hunting. We all need to get things back into perspective once in a while and never forget what we have all been blessed with and then, share it with those we come in contact with.

For more go to: ThermaCELL and ThermaScent

Don’t Get Left Behind the Stealth Night Hawk Hybrid

Life & Death in the Deer Woods