Robbie: Search For The 8 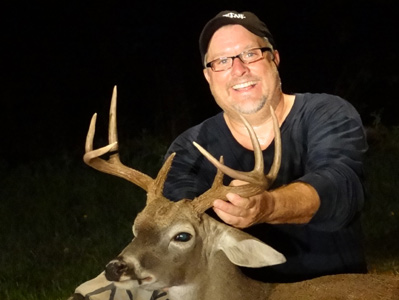 When my hunting buddy Robbie Cramer and I got unexpectedly booted from our honey hole area we scouted with the intention of getting as close to the former hot spot as possible.  We set up on a dried creek ditch near the fence line of the property we had been hunting. We put up a tripod in a group of oak trees and wedged a Double Bull in under some ceder trees.

From the season’s get go there was deer activity. When Robbie came down he hunted there exclusively and on 3 afternoons I hunted there.

Robbie saw mainly young bucks and does. But on almost every hunt he saw one or more mature bucks in the trees behind the ditch or along the nearby fence line. On of the mature bucks, a big 8-point walked over to the ditch (19 yards away). The buck was head on and Robbie waited for a broadside angle. It was a short wait because the buck left.

We set out a SpyPoint game camera to see if we could get pics of the mature bucks that came through the area but skirted our side of the ditch. The area we pointed the camera at didn’t get much deer traffic, but an 8-point did show up. 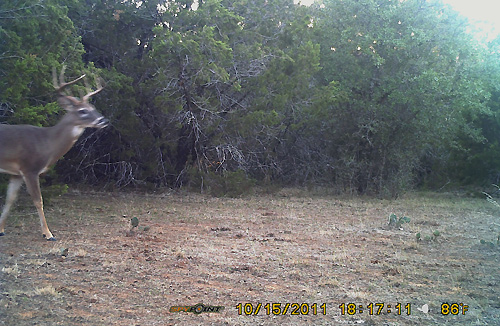 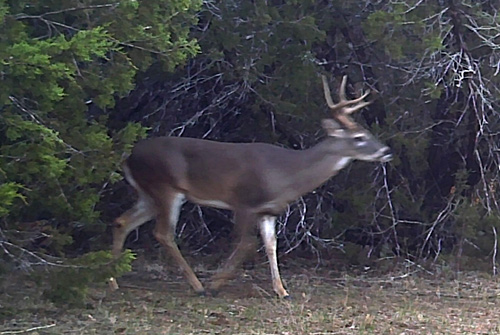 And the SpyPoint caught a younger buck working the limb over the scrape. 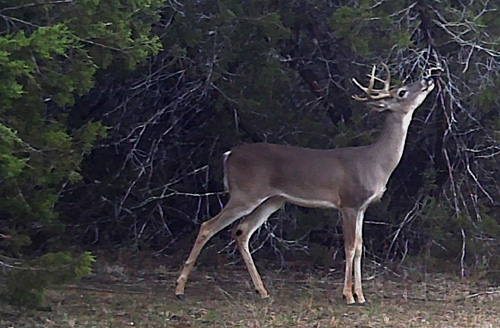 Robbie went home for a few days and returned to hunt again. On the first day’s hunt he saw some young bucks harassing some does. And saw a big mature buck in the afternoon — by the scrape.

The next morning was very foggy and Robbie didn’t see much. That afternoon he went in two hours earlier than usual. Half an hour from getting in the Double Bull he saw some does come through the ditch.

Time passed and he saw several more deer, young bucks and does. Robbie had fixed his viewing window so he could keep track of any activity at the scrape and at deer-30 he saw a mature 8-point pawing the scrape. Two does were to Robbie’s right and the 8-point walked to the ditch and stepped up to check them out. The does darted away.

When the 8-point turned around and stopped broadside Robbie was already at full draw. He settled his top pin on the buck’s vitals and took his sshot. The buck charged loudly through the ditch and disappeared. Robbie texted me.

Robbie waited half an hour and as daylight faded he walked to the ditch. His arrow was sticking in the limb of a scrub tree. As expected, there was blood on it. But Robbie did not see any blood on the ground and he backed out.

I was ready to track when Robbie drove up. Also, we got my neighbor Perry and we all went to search for the buck.

I didn’t notice any blood either so I walked over to the fence and shined my flashlight  around. I saw the glow of an animals eye about 40 yards away and looked for a place to climb the fence. But Perry saw blood and was following it into the trees. When he told us the trail was turning toward the fence I shined my light over there to catch the reflection of the eye.

Robbie said he saw something laying on the ground. I pulled a rung of the aging fence up and stepped  on the lower rung. Robbie slipped through and did the same for me. 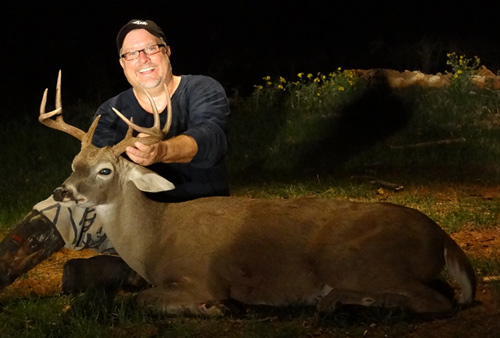 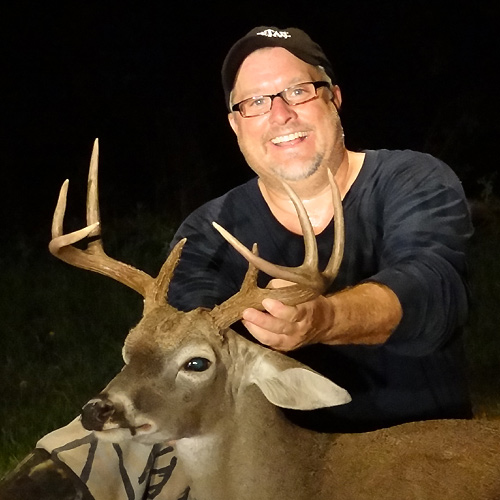 Robbie used a Grim Reaper Whitetail Special to take his 2011 buck. He used Harmon Triple Heat to make a mock scrape that immediately brought in bucks to it. Robbie is meticulous about scent control and elimination and uses Atsko Sport Wash to clean his hunting clothes and himself.

Stalking Black Bear in BC

Maximize Your Arrow's Performance with NuFletch