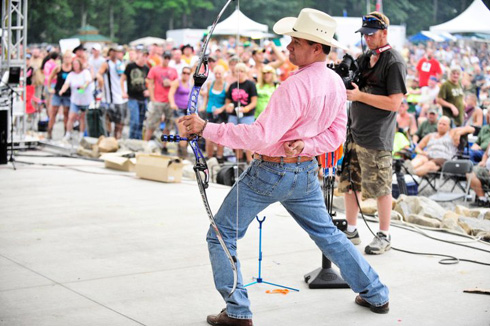 Author bustin them at the Deerassic.

A variety of shows and events have made summer 2011 a busy time for me. I hope that you have enjoyed your summer. As we all anxiously await fall for obvious reasons, college football and hunting season, I took a few minutes to reflect on recent shows and events. Summer 2011 has had lots of great events…

July 15-17 I was in Alabama for the 28th Annual World Deer Expo in Birmingham, Alabama. This is one of the largest shows of it’s type in the country and I enjoyed a return visit to this venue. Bob Coker and I did some media Friday morning early, including a visit to a local Birmingham radio show. For  video footage of that media appearance: CLICK HERE

We also did a TV news appearance while at this venue. Bob runs a great show and if you are an exhibitor this is a good opportunity to see lots of folks in one weekend, he gets a great crowd at this event.

July 28-30 I was in Coudersport, PA to perform shows at “Denton Hill” or ETAR, the Eastern Traditional Archery Rendezvous. This is dubbed one of the largest traditional archery events in the country and people come from far and wide to this event. Held at a ski resort, there are archery ranges, vendors in tents, practice ranges, the famous blanket sell where people lay items on blankets each evening to sale or trade, and lots of other fun activities. I don’t often do many “archery only” events like this so it was nice to spend a weekend among traditional archers. I met some new friends, saw some old friends, and had a great weekend.

Saturday night’s 8PM show was my favorite. A little boy asked to shoot 20 arrows at once. Although I only had 12, I loaded all 12 on the string and popped a balloon with them. This was a new shot and the audience liked it so much that I have done it several times at shows since. The grand finale that night was a mustard seed. I had four spotters come up from the audience, put a black background on my net so we could all see the seed, and Jake Chapman tossed the seed into mid air. I hit it first shot! I dedicated the shot to my friend the late Rev. Stacy Groscup, who often performed at Denton Hills.

August 5-6 was the big DEERASSIC CLASSIC event in Cambridge, Ohio. This is the event that draws 15,000 plus people. I performed twice on Saturday, once in the afternoon and the grand finale was Saturday evening at 7:20PM, just before the big fifty fifty drawing took place and then country singer Josh Thompson performed. As I walked out on stage Saturday night, it looked like a sea of people. They video the show and broadcast it on the grounds with jumbo tron screens. After hitting the three baby aspirin tablets, I announced to the crowd that we were gonna attempt the mustard seed shot. Conner put up a dark background on the net and did a practice throw. His next toss went up and again, FIRST SHOT! That was a great way to close the show. This is a one of a kind event that I often have heard called the “Woodstock of hunting.”

August 20-21 I joined my friend Bud at the Wheeling, West Virginia Cabela’s for a weekend of exhibitions there. I did two Saturday and two Sunday. This show was challenging weather wise, Saturday we had extreme heat and sunshine and then Sunday had high winds. We moved the show under the main entrance and had some great audiences over the four performances. I hit the mustard seed at every show, and this is getting to be a popular shot. I did two radio interviews, Chris Lawrence mentioned the show being at Cabela’s on his statewide “WV Outdoors” show, and a TV news station captured the mustard seed shot on camera while I was in town. Cabela’s fed me well and I had a great time at this event. This is their third largest footprint in all the Cabela’s, at 175,000′ ft. They also have a million ‘ ft. distribution center nearby so Cabela’s has had a big impact on the economy in Wheeling, WV.

August 27-28 I will be performing at Festival in the Pines in Eau Claire, WI. I have performed in Eau Claire many times at the Northern Wisconsin Deer Classic but have not performed in Eau Claire in the summer. I am looking forward to this event. After that I head back to Nebraska for more shows and then on to other places for appearances through November. I’ll take December off to be home for the holidays before the January season kicks off another year of shows. So it goes in the life of a traveling archery showman. We are currently working on the Winter 2012 schedule and will try and post some dates/locations soon. I am looking forward to working with the Renfro family again in Indianapolis in 2012, they have a great show and I always enjoy performing there.

I’ve now added the 12 arrow shot and the mustard seed shot to our programs in most places. So far the audiences love the new shots. They are both challenging but then again so is a baby aspirin from behind the back, right? That’s the latest on the “HAVE BOW WILL TRAVEL” tour. Visit www.frankaddingtonjr.com for more information on my show. You can video footage on page 2 of the website.

Seeing is believing, see you at the show!