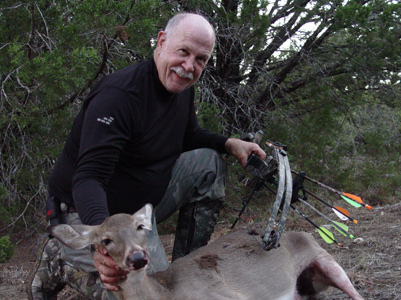 My long time bowhunting buddy Donald Duck (Don Beckwith) and his brother Paul came down to bowhunt deer and wild hogs. They had quite a time.

The Duck started his hunt in a ground blind he built himself from plywood. It’s roomy and he calls it his “Condo” stand. It is on the edge of a food plot he plants every year.

After daylight a group of wild hogs came into the areal The Duck waited, and when a spotted boar came into bow range and turned broadside, he took his shot. The spotted boar raced into the trees. And the group of hogs ran in a different direction.

An hour passed as the Duck waited to see if any deer came in his immediate area. He saw a few deer in the woods but not in his food plot. Then he got out of his “Condo” and took up the track for the wild hog.

When he saw his arrow a short distance into the woods he picked it up and carried it along with him. (This was going to turn out to be a good thing.) A little bit further he saw the spotted hog laying motionless in some brush. It looked quite dead and the Duck walked to get it.

Woops! With only a few steps between them the boar jumped up and charged straight at the Duck. There was no time get out of the way. No time to shoot. No time to do anything but what the Duck did.

He slammed the arrow into the charging boar’s chest.

The spotted hog turned and ran. Immediately the Duck called his brother on his cell and Paul came as quick as he could. The two of them tracked the hog a short distance and this time it had expired.

The next day Paul hunted the Condo and a huge black boar came up. Paul took his shot and put the huge hog down. 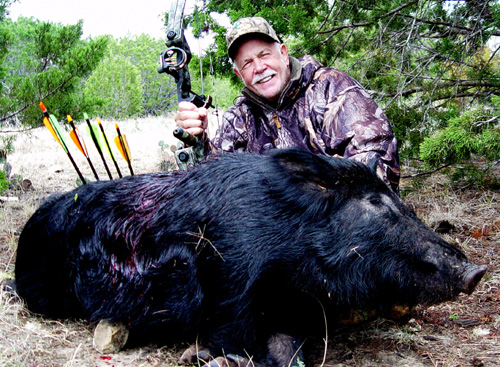 Paul was here to fill his freezer with venison and it looked like he may not make it happen until the last day of his hunt. Then he scored on this nice doe. 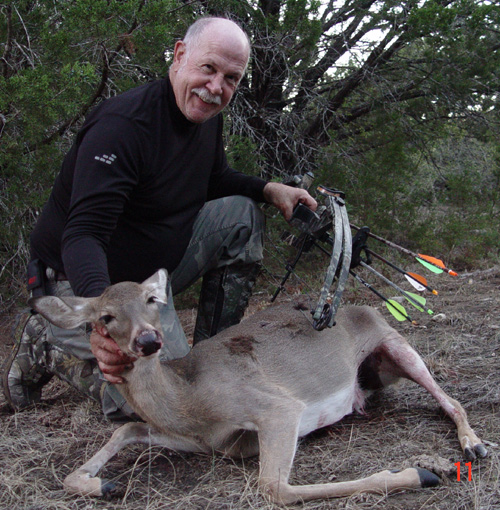 And so went the Duck and Paul’s bowhunt.