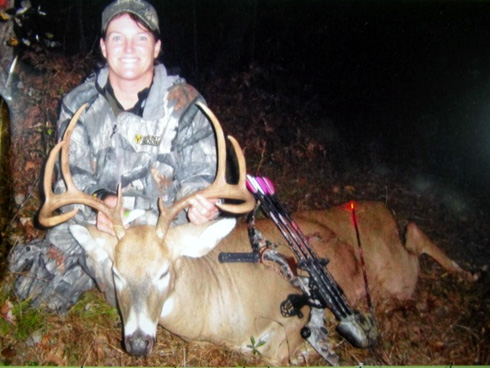 Author with her buck.

My adventure began around 9:00 pm on the evening of Monday, September 19, 2011 when Paul Krause, director of marketing for HuntnLand Wisconsin, Black River Falls drew my name out of a box of over 600 entries for a 3-day trophy whitetail hunt. I have never been on an outfitted hunt so I was very nervous and anxious about the whole adventure that was about to unfold. The first order of business was to contact Brian Aish, owner/guide of Huntnland Wisconsin to set up my hunt. We agreed that I would arrive Sunday afternoon, October 9, 2011. I would hunt Monday October 10- Wednesday October 12, 2011.

Brian eased my worries and gave me advice on the yardage I needed to be comfortable shooting at, in which was at the 30-yard mark or better. Within 48 hours I made a trip to Lena Swamp Archery, Oconto Falls WI to tune up my bow. I was comfortable shooting at 20 yards but not sure that I was capable to shooting beyond that because of my low poundage. I started hunting in 2002 and my bow was set at 41 pounds. I was confident with my bow and what it is capable of killing. A well placed arrow is more important than how many pounds you shoot. I have enough kills to prove that point, to date I have 3 bucks and 5 does under my belt. But with the extra yards I may be required to shoot, Wade Jeske owner of Lena Swamp Archery raised my poundage to 50 and adjusted my sight to easily shoot out to 30 yards. I bought new, lighter Carbon Express arrows to help with the extra yards and tricked them out with the Firenocks, which was another great prize I won in this package. I had no problem hitting the 30-yard mark.

So, hurry up and wait another 3 weeks until my hunt. In that time, I practiced every chance I had from my yard and from my deer stand. I hunted around home and found it a great distraction knowing I had this trophy whitetail hunt in my back pocket.

Sunday, October 9th finally arrives. Gary, my husband accompanied me on my journey. He is not a bow hunter, so he decided to take a boat and give the area lakes a try. We arrived at our home away from home, Tall Pines Lodge mid afternoon. We got unpacked and headed out for pizza and some liquid courage donated by Hideaway Tavern, Black River Falls. We watched the Brewers win and had a great time with the owner, employees and patrons. Upon my return, Brian briefed me for my morning hunt. I had a hard time sleeping and found myself wide-awake at 3:00a.m. I showered in “Just for Does” scent-free shampoo, conditioner and body wash. I ate breakfast and packed my fanny pack for a half-day hunt.

Brian picked up me and Ray, fellow hunter and lodge mate at 5:15 am. I was dropped off first with bow and gear in tow. I arrived at my ladder stand, got myself tethered and waited for daylight. Once I had enough light, I used my rangefinder to determine the yardage.

The landscape is recently logged over with mature oak and pine trees scattered about. The temperature was to reach the upper 70’s and on a full moon phase. As the day heated up, the gnats came out and the deer didn’t. I forgot my Thermacell at the lodge. I did not make that poor judgment call again. The weather was not going to break all week and neither were the gnats.

I hunted until 1:00p.m. Brian picked me up and got me back to the lodge for a 20-minute break and to freshen up my fanny pack. He came back at 2:00 pm to pick up Ray and me for our evening hunt. He dropped us off and we parted ways to hunt over a Horny Buck Seed Company, Pound WI food plot about 25 yards out. This ladder stand presented challenges of its own, unknown to me at this time. The deer were on the move. I had 2 does and 2 fawns within range. Just as the sun hit the treetops, I heard movement to the right and behind me. I caught a glimpse of a buck coming in on the trail I walked in on. He stopped to make a scrape and a rub on a small pine tree then cautiously continued coming down the trail which led to the food plot. He came to an abrupt broadside halt at the exact spot I entered my stand about 15 yards away and locked in on me.

This stand had a camouflage cover attached to the rail which helped break up my silhouette. He needed to fit in the Quality Deer Management guidelines of 8 points or better and an Inside of 16″ or greater and I was unsure of his size. After what seemed like forever he continued slowly, stopping intermittently to check things out. He finally reached the food plot and the 25-yard mineral lick. He was quartering hard to me and I went to full draw. He was definitely a shooter, a big 8 pointer with a minimum of a 15″ inside spread. He never gave me a shot so I let down and watched him graze out of range.

As the night shadows grew, I heard another deer coming down the same trail this buck came from. I could see he was a smaller buck as we went to the food plot and the mineral lick. The larger buck emerged to challenge the inferior buck. I sent Brian a quick text to let him know I would be late, as I am not taking a chance to spooking this buck.

When I could I quietly exited my stand. Brian, Ray and I meet back at the checkpoint and I tell him my evening’s events. Brian offers me words of encouragement and upon returning to the lodge, he showed me deercam pictures of “shooter” bucks. I was confident this buck was a shooter. Brian briefed us for the next morning’s hunt and I sleep better that night.

We were picked up at the same time in the morning and Ray and I were dropped off at a new location. We got our gear on and headed out in different directions. This stand had the same kind of landscape as the previous morning’s hunt with both stands placed on major runway corridors leading to and from food plots and bedding areas. I tethered myself in, rangefind the stand and waited for the deer. Again, it is upper 70’s for temperatures and not as buggy thanks to my Thermacell. I stayed on stand until 1:00pm.and the deer eluded me again.

Later I met Brian at the checkpoint and followed the same routine as the day before. I wasm back on the same food plot stand as the evening before by 3:00p.m. I take a good look at the 15 yard shot opportunity from the night before and noticed a Poplar sapling’s tops are obstructing my shot. I attempt to open it up but was unable to reach the majority of the obstruction. Therefore my only opportunity for a future shot was off the food plot. The deer are on the move earlier this night. A doe and her fawn came in behind me as well as the smaller buck from the night before. They make their way to the food plot and graze for 20 minutes then leave for the nearby pond for a drink. They circle through the marsh, cut through the woods back to the food plot. The fork horn buck is just 20 yards from me on the food plot, cautiously watching down the trail he came down the night before as he is grazing. I watch his body language to give me a clue of anything that may be coming down that trail.

Then I hear a noise. Something is coming. I look over my shoulder and here comes the mature 8 pointer. He is coming confidently down the trail until he gets to my 15-yard opening. At this point, he locks his sight on the fork horn and with the hair on his back bristled and ears laid back, he walks quickly to the food plot to prove his dominance.

The fork horn jumps back a little, but decides to stay. They are both broadside to me and continue to eat, head to head. I have a good 20-yard look at them. This buck is definitely a mature buck. They practice sparring giving me a good comparison of the 8 pointer’s rack size. I decide this was the buck for me.

They go back to eating and I come to full draw. The dominant buck is 20 yards and broadside as I raise my top pin, lock down and release. I watch as the Firenock tipped arrow hits its mark. At impact the buck runs 50 yards across the food plots, then changes his pace to a fast walk before exiting into the woods. I listen closely and hear 2 loud crashes. It is 6:22p.m.

I texted Brian and Gary letting them know I shot. I suggested we wait 90 minutes and quietly left my stand and waited at the checkpoint for Ray to finish his hunt. I called my ‘brother’ Mark Rost while waiting for Ray and he asked me to tell him exactly what happened. He reassured me I had made a good shot.

Ray, Brian and Gary arrived at 7:20p.m. I retold the story and returned to the stand where I showed them where I shot the buck. We followed his tracks and found some blood on the field. We then went to the point of where I had seen him enter the woods. Ray found my arrow glowing on the ground so we knew I had an exit wound. We continued another 30 yards on the blood trail and then it got sparse. I was having a sick feeling overcome me, as the sign looked bad to me. I am at last blood as the guys fanned out. 20 or more minutes passed and Brian joined me at last blood. He encouraged Gary and Ray to do the same. Ray was 20 yards away near a pond in a marshy area and was making his way back to us using his flashlight raised above his head to light up the area when he yelled out, “Hey, I found your deer!”

I ran to Brian and my husband for a hug. I ran to Ray to look at my trophy. He greeted me with a high five as Gary and Brian joined in the celebration. We took several pictures, then loaded him up and returned to the lodge for field dressing. This mature 8 point buck had a 17 1/2″ inside spread with 9 1/2″ G2’s. He weighed 185lbs field dressed. I made phone calls to my parents and my ‘brother’.

Gary and I got up early the next morning and packed my trophy in ice and got ready for the 3-hour trip back home. It was a definitely a memorable hunt and we had a great time despite the high temperatures. I pinch myself daily as it seems like a dream.

I am a first time illuminated nock user. I am SOLD on Firenock – it was awesome watching my arrow hit its mark and then finding my arrow in the woods – You can see my lit arrow in the picture