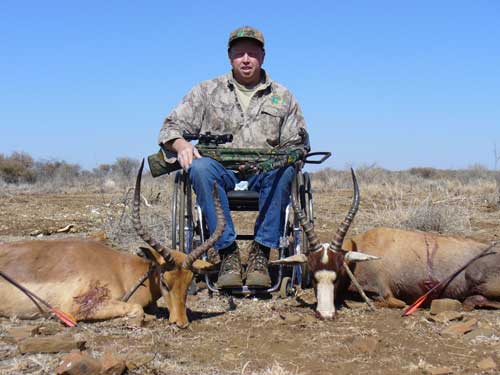 Author confined to a wheelchair, unable to pull a compound is able to hunt because of a crossbow.

Whenever a group of bow hunters gathered, the conversation always seemed to come around to what bow do you shoot ? When my turn came up and I said, “I shoot a crossbow “ I would usually get some raised eyebrows and dirty looks. But that is usually not the case anymore. Many archers understand the true facts about crossbows and have accepted them. Most all understand that this is the only way a disabled person can still bow hunt, they are not remotely comparable to any firearm and more and more states are adopting the crossbow into their bow hunting season. We still need to clear up the rumors, untruths and misconceptions of the crossbow and continue to educate the public on the true facts of the modern day crossbow. I would suggest that if you have question related to the crossbow you should try shooting one and see for yourself what it will do. Once everyone understands the real truth of the crossbow it will be much easier to see its use accepted everywhere as a viable, fun to shoot hunting tool.

There are still some bowhunters who are caught in the crossbow dilemma. I know of one elder bowhunter, who due to age, cannot use a compound bow any longer. So he went out and bought a crossbow with all the accessories. He even took it out and practice shot it a few times. Here is where his problem comes in. He believed in all the crossbow hype and feels that if he uses a crossbow for hunting he is somehow cheating. He is just going by all the rumors he heard about crossbows when instead he should have been looking for the true facts. Here is a classic case of why we need to educate bowhunters on the crossbow. How many other elder bow hunters feel the same way?

The crossbow is a great way to help retain our aging bowhunters and keep them in the game. So many think that their way is the only way and don’t consider what happens when you can no longer use a conventional bow. Stop and think for a moment how you would feel if the day came that you could no longer pull your bow. Would you give up bowhunting, a sport you have a passion for, or would you use another option such as a crossbow ?

More and more states are recognizing the crossbow as archery equipment. There are 20 states that allow the crossbow to be used by anyone during their archery seasons. All states have some form of allowing the disabled [ with a permit] to use the crossbow for hunting. There are five states that have a law for the those of a certain age to use a crossbow. Each year there are more states changing their laws to allow the crossbow as the hunting tool. New York is the only state that makes it hard for the disabled to get a permit and that law is being currently challenged and I am sure it will be changed.

You can see the change coming. Where there was zero publicity previously, we now see ore and more articles about crossbows in outdoor magazines. On TV we see the same thing as more shows feature the crossbow. This was not the case several years ago when talk of the crossbow was taboo. As the crossbow is being more accepted there is such a high demand the companies are having a hard time filling orders. Five years ago there were maybe five or six manufacturing companies. Now there are over 20. And you can see the change in archery shops and larger sporting goods stores. Where retailers might have had one crossbow on display in years past they now have a whole line of crossbows from many companies. Crossbows also have their own line of accessories including broadheads and arrows specially made for crossbows. Much like the 60’s when the compound bow hit the market it was not readily accepted and the crossbow is following the same path.

I am a board member for our states’ bowhunting organization and I got am email from another member who found it objectionable that a major crossbow company referred to their crossbow as a’ bow’. He is not against the crossbow but was offended by them calling it bow instead of what he felt was the proper term ‘crossbow’. I emailed him back saying that as a hard core bowhunter myself I often referred to my crossbow as a bow. As a bowhunter I use the same products and equipment and hunt just like other bowhunters. So why must I feel any less of a bowhunter because of my choice of archery equipment? My bow shoots an arrow with a broadhead just like compound bows.

Here is another fact…. yes, I call it an arrow when maybe the correct term is ‘bolt’. If you look at it they both have feathers, a nock and a screw in broadhead. The only real difference is that they are a little shorter. I think that if it looks, flies and kills like an arrow it must be an arrow. If you want to use the correct terminology and call it a crossbow bolt that’s okay with me, I certainly won’t be offended. But if I want to call them a bow with arrows what is the problem?

We are all on the same side fighting for the outdoor cause. So let’s not alienate each other but rather team up to defeat the anti’s our real enemy. Remember if they outlaw bowhunting it won’t be just the crossbow but all bowhunting. Let’s get our priorities right. We are much stronger together than divided.