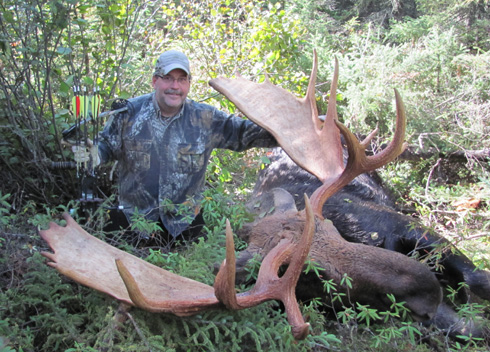 Author with his trophy moose.

It’s the kind of morning you hope for when you’re moose hunting. We awoke to the ground covered in frost, the temperature was in the thirties and there was not a wisp of wind. We were on an archery moose hunt in some of the best moose country in northern Ontario. It was September 28th and it appeared that the moose rut was just starting.

Outfitter Greg McGraw from Holinshead Lake Outfitters near Armstrong, Ontario had showed me this spot several days ago when we were scouting together. Greg is an experienced guide and has been hunting moose for many years in Ontario. It was an old cut area which was nestled in behind a large new cut and the moose sign was terrific. Large stands of brush had been thrashed by a bull and we located a freshly made rut pit. It was obvious that there was a bull in the area and by the size of the thrashings; it was a large dominate bull. The bull in this area had beaten us on two hunts in the days prior to this one. I am the Sheriff of Losco County in Michigan and was hunting with Sheriff Scott McNurlin from Goodhue County in Minnesota and we had this bull within thirty yards on both prior occasions. It was Scott’s birthday and we were hoping to take this moose and make this a birthday to remember.

Greg and Charlene McGraw are the owners of Holinshead Lake Outfitters in northern Ontario. They run a top notch fishing, bear hunting, and moose hunting operation which is located on Holinshead Lake. The lodge is located two hours from Thunder Bay Ontario which is the closest civilization. The lodge and cabins are powered by a large diesel generator which provides all of the comforts of home. Greg and Charlene take great pride in making their clients comfortable and happy during their stay at Holinshead. Greg had set me up to hunt with, and call for Scott as this was his first trip to Holinshead. I had been to Holinshead many times prior to this but had yet to arrow a bull moose. The different groups I had hunted with in the past have taken five bulls but I was yet to pull back the string on one myself. Scott and I both had archery bull tags for the large area around Holinshead Lake.

We made the long walk back into our hunt area in the dark as we wanted to be in place and let the area quiet down prior to shooting light. Since we had been beaten twice by calling in the same area we decided to move a several hundred yards in the direction from which the bull had come the previous times. On both occasions he had come from a large area of tall spruce approximately one quarter mile away.
At daylight I started my series of cow calls from a birch bark call which was made from the bark of a tree near the lodge the previous year.

Every fifteen minutes I called until 9:00am with no responses. I then switched to bull calls and began thrashing brush and breaking branches to simulate another bull in his area. After finishing the first series of bull calls we heard him responding from the tall spruce thicket. He appeared very agitated by the thought of another bull in his area. You could tell at that point that he was making his way to my call. I continued my bull calls and he kept moving in our direction vocalizing as he walked. About halfway to our location he hung up and stopped talking. I kept bull calling but threw in several soft cow calls in between. He fired back up thinking that this new bull was now with one of his cows.

I had Scott positioned about twenty yards in front of me in a direct line with the bull. With any luck the bull would continue toward me and walk right by Scott. The bull was getting within the fifty yard range and was really fired up. It appeared Scott was going to have the best birthday present he could ever ask for.

We could see the brush moving where the bull was thrashing his horns and he was getting to the point where we would be seeing him. At that point I raised my plywood moose horns and bull called him to make sure he focused on me which would give Scott the advantage to make a shot. As he broke into a small opening where he could see my horns he roared at the top of his lungs in rage and began thrashing the brush around him. At that time we could see he was a huge bull, bigger than any I had seen in my travels in Ontario. He was tall and wide with large eye guards.

When he reached the forty yard range he started to veer to his left away from Scott in an attempt to circle me to get the advantage of the wind. He was drooling heavily and acted aggressive at the thought that there was another bull in his area. It was at that time I realized that the shot would be mine to take as he was approaching to within fifteen yards to my right.

I laid down my horns and picked up my PSE Rogue compound. As he walked out of a very thick area at twelve yards he stopped, looked at me, with only his head and neck showing. At that point I was at full draw and placed the pin on his neck waiting for him to take just one more step. It was a stare off for several seconds and then he grunted and took that step exposing his right side shoulder. I placed the pin just behind his shoulder midway up his body and released the 100 grain Muzzy.

The hit was perfect and the arrow was buried to the fletching in his lungs. He took several steps forward and then turned to run back to the area from which he had come. I bull called in hopes he would stop or at least slow down thinking that the mystery bull was responsible for his mishap. We heard him stop and then brush crashing and it was silent. Our hopes were that he was dead in his tracks not far from us in the thick swamp. We waited for about twenty minutes and never heard another sound from the area. Scott who had moved up to about fifteen yards behind me had watched the entire encounter unfold and was totally amazed with his first experience in moose hunting. He stated that even though he didn’t end up making the shot it was still a very memorable birthday for him.

We thought it would be best to back out of the area and let the bull lie down and hopefully expire. I knew it was a good hit but it’s always best to play it safe and wait to track the bull. We traveled back to the lodge and located Larry Ogden who is one of the best moose guides in northern Ontario and very familiar with the Holinshead area. Larry has been guiding in the area for over fifteen years and knows moose better than anyone I know. Larry agreed to go back to the area to assist in locating the bull. We told Charlene of our luck and asked her to inform Greg when he came in from hunting so that he could bring his tracked Argo to the location anticipating success in locating our trophy.

We went back to the area of the shot and while Scott stayed at the point of the shot Larry and I fanned out. Larry picked up a moose trail with real fresh tracks and about twenty minutes and nearly eighty yards later Larry located the bulled piled up on the trail. It had been a perfect shot penetrating both lungs. The bull measured 61 inches and was estimated to weigh near 1500lbs. We were totally amazed at our success and after our rejoicing and a long series of picture taking; we began the task of field dressing the bull. As we were finishing the process, Greg arrived with the Argo and we removed the animal from the swamp in two trips. The remaining part of the day was spent skinning, capping, quartering and deboning the moose and getting him in Greg’s walk in cooler at the lodge. We both agreed that the next day we would set out to get Scott his belated birthday gift of his own bull moose.