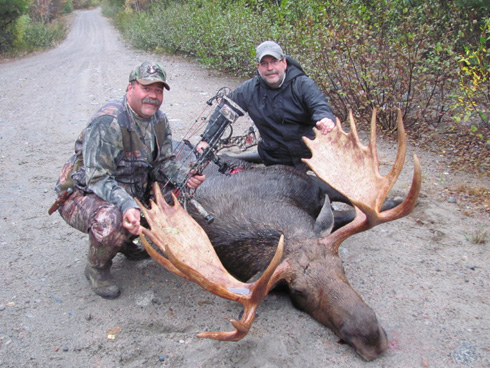 Author and Scott with the considerate trophy that dropped on the road.

The next morning as we were getting up and stoking the wood stove the wind was howling and rain was hitting the windows. The temperature had dropped considerably and it became obvious it was going to be tough hunting as calling moose in the wind was less than desirable. We were going to have to be right on top of one or he wouldn’t hear the call so we decided to take advantage of the situation and use the morning to scout for new spots to hunt. There was always a chance that we would see one in our travels and make a move on him. We headed out in the opposite direction of the last bull taken.

We traveled to an area where Greg and I had stashed a canoe on the small river that dissected a great moose hunting area. Greg and I had paddled up the river a few days back with no luck but the opposite direction appeared to parallel some old cut areas where we had hunted in years past with great success. I showed Scott the area and where the canoe was and told him that the next good weather day we would paddle the other part of the river.

About an hour after dark we were driving down an old grown over logging road looking for fresh moose tracks on the newly rained on roads. As we rounded a curve in the road we both spotted a large Bull Moose moving away from us along the edge of the road. At that point the moose was about fifty yards away so I stopped and backed the truck to an area the moose could not see us. I told Scott to get his bow ready as I was going to attempt to challenge the bull as we had done the day before. I was dressed in an all-black rain suit and grabbed my plywood horns. As we headed around the curve in the trail I told Scott to stay close behind me as we were going to approach the bull for a possible shot.

The bull was about 100 yards away walking away when we spotted him. I gave out two loud bull grunts and raised the plywood horns so that he could see them. When he saw the horns he turned completely around and began walking toward us, grunting on every step he took. He began thrashing brush, swaying his head and walking stiff legged as they do when they are preparing to spar with another moose. We closed the distance to about twenty yards and Scott moved to a large bush to give him an advantage for a shot. I stepped to the left and whispered that I was going to try and get him broad sided for a better shot as he was facing head on to us.

All this time I was grunting at him and he was grunting back as he thrashed the bushes and started to drool. As I neared a stand of brush I thrashed the brush with the plywood horns which drove the bull crazy. He then started to turn toward me at about 15 yards he gave Scott a great broad side shot.

Out of the corner of my eyes I could see Scott drawing his bow and zeroing in on his target. Scott released his arrow and we both watched it hit its mark in the lung area. The bull spun away from us and started to run toward the old logging trail. I gave several loud bull grunts in an attempt to slow him down so that he didn’t run off too far and about 40 yards he stopped and turned to look in our direction.

We could tell he was hurting as his legs became weak and he crumpled down in the middle of the trail. We could not believe what had just happened. We gave him several minutes and then walked up to him and realized that we had just taken a second huge bull in as many days. The bull measured 53 inches and had great mass like my bull. Although it was one day late, it was a wonderful birthday gift for Scott and we were both extremely happy with our success. This bull was going to be much easier to recover as we could work a truck and trailer into the logging road and take him back to camp after field dressing.

We again contacted Larry and he came to the location with a truck and flatbed trailer. We winched the bull onto the trailer and headed back to camp to start all the hard work again in processing the great animal. The next day we both planned on sleeping in as our tags were filled and the meat was put away in the coolers. The memories that we both had in taking those two bulls in back to back days will never be forgotten and the friendship establish at moose camp will be remembered forever.

Allan and Scott are currently waiting the mandatory 60 day drying time for scoring in Pope and Young.