by Brian Johansen
in Bowhunting Posts
0 0
A A
0 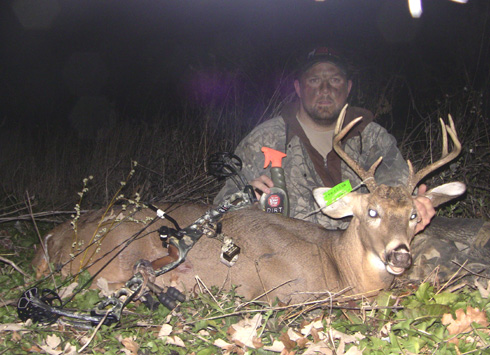 The morning turned out to be a bust. Both Justin and I were congested and holding our breath the best we could trying not to allow the coughs to burst out. Yep, we had what hunters everywhere feared the most, a cold during the season. Even so we found ourselves sitting in the tree stands wet to the bone and cold. The deer were not moving and the rain refused to let up, so we decided to end the hunt and pick up an opportunity to set a new stand location. We’d been waiting for the right time to make the move.

The location of choice hosts a small bedding area and when surrounded by corn (like it is this year) the area has deer traffic like city rush hour. On this day Mother Nature was giving us the opportunity to move in quietly and we jumped at the chance to set our stands.

Problem 1, being that there is a bedding area we could not set up too close as we were not willing to bump the deer upon entering and exiting the stands.

Problem 2, finding a tree young enough that had good coverage in the 15 to 20 ft range, within reasonable distance to the bedding area and shooting distance to the wood line and corn edge was another issue.

Finally, a tree was located and it felt good, the kind of good you get from your gut. A feeling that tells you good things are going to happen! To work we went and in a matter of a few minutes we had our setup in place and a plan hatched. The tree stands were set perfectly. There were 4 scrapes surrounding them in a semi circular layout with a few scattered rubs throughout. The woods edge had numerous scrapes littered along the entire section and showed that the area was in fact very active. It appeared to us that our location was in the middle of a funnel that deer were using to cut the edge of the woods corner through the bedding area and to another section of corn.

Justin and I decided that when we returned for the evening hunt we would add some of Buck Stop’s Guide Series Doe in Heat Urine to a few scrapes along the wood line and to two of the scrapes immediately downwind of our location. This is exactly what we did when we returned.

The sky was overcast, and there was a fair breeze in the air. For most hunters this setup would not have been a choice sit as the wind blew directly into the bedding area. But for us, this is exactly what we wanted. All season we have been spraying down with Buck Stop’s Scent Stop, which is a scent elimination spray. The amount of deer we have had downwind of us this season was in large numbers and not a single deer had even thought about scent checking our air stream which is absolutely phenomenal! Both Justin and I knew that with this spray, having had our clothing washed in Buck Stops Laundry soap, and using scent elimination hunting clothing we were going to be in store for an awesome night.

Shortly after 6pm Justin informed me that he could see a buck working a scrape, so I handed him the video camera and he filmed the deer scenting up a licking branch and pawing at the ground. The buck then entered the bedding area and checked a second scrape. I could not see this buck due to several low branched trees up in that area and kept inquiring as to what the buck was doing. I had the grunt call in hand and was awaiting the word that the buck was not coming our way. Fortunately the buck turned and made a B-line directly to one of the scrapes we had doctored with the Guide Series Doe in Heat.

This buck came in completely down wind and had no idea what so ever that we were waiting. Justin handed me the camera back and the hunt was on. The buck made his way to 40 yards, then 30, then 25, then 20. He was headed for the scrape when Justin drew his bow. I had the camera on the buck and recording when I heard Justin say ‘Stop him’. I let out a doe bleat and the 8pt stopped in his tracks. Justin lined up and released the arrow and it gave off a sound, a sound that every hunter loves to hear, the THWACK of a perfect hit.

The buck was clearly still clueless as to what had happen and took off but with a quick and loud second doe bleat the buck amazingly stopped once again. The gorgeous 8 point stood there looking around for the noise he heard but then started to stagger and fell on the thick bed of leaves covering the forest floor.

The celebration started and muffled glove lined high fives broke the silence. The plan, the setup, and our confidence in Buck Stop products all played a vital role in the harvest of an awesome Michigan whitetail buck. In years past we would normally have played the wind and hoped for the best but since discovering Buck Stop products we now play the deer!

for the best is scent and lure products go to: Buck Stop Scents

Little Anna - The Fight, the Quest, the Success.

On The Move Again