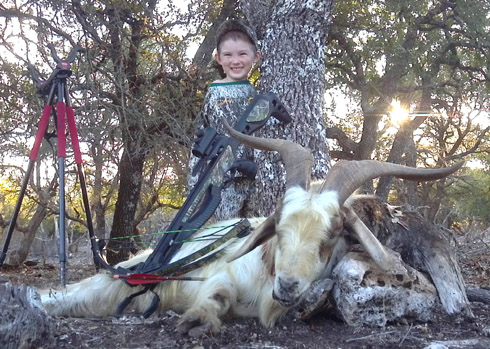 Although I have been to The Lone Star State many times I knew this trip would be one that I would carry with me the rest of my life. I stepped out of the airport to an unfamiliar feeling. The weather was actually perfect for once. As I stood and thought about the exciting week ahead I was brought back to reality by the honk of a horn and a very familiar smile. It was my good friend and hunting partner Ken Farmer. We said a quick hello and loaded my gear. I could tell he was just as excited as I was for this excursion.

Although we would not be hunting on this trip, this was our most anticipated hunt of the season. We would be following the most inspirational person I have ever had the pleasure to know in my life. At first sight she looks like any ordinary five year old girl but when you hear her story and see the strength she posses you understand why it was all so easy for me to be drawn to her and awe inspired.

Little Anna Farley has been fighting a battle that no child should have to fight. Anna was diagnosed with Ewings Sarcoma, a rare cancer that usually only appears in males. She has undergone many treatments and had part of her humerus and clavicle removed along with the connective shoulder muscles. To look at her, see the twinkle in her eyes and the smile that lights up a room you would never know the battle she has been fighting.

I met with her father Travis who has since become a near and dear friend of mine. Anna has a dream. She wants to compete for Huntress of the Year and we were all determined to help her achieve that goal in every way we could. First, we had to get her a good crossbow as Anna could not pull a standard bow. I went to work and soon was able to present her with a crossbow that Barnett was so gracious to donate for this coming hunt.

Anna was off the chart excited and we wasted no time getting the Barnett sighted in. Anna had her surgery on her right shoulder and just so happened to be right handed. This was a very small obstacle for her to over come and with patients and practice Anna learned to shoot left handed as well as most hunters who have done so their whole lives. After many bullseyes and a nodding approval of her father we were out to find a North American Bison.

Bambi Harrel from Lonestar Exotics placed us in the blind and gave instruction of where the Bison would be coming from. We got set up and waited patiently. As I watched Anna look intently out of the window I could not help but feel a mixture of emotions. I felt eager in wanting to see her reaction when she spotted the first bison coming our direction. I felt excitement for her first hunt with a crossbow. And thirdly and more powerfully, I felt inspired.

Anna peered out the window and then whispers “There’s one.” The bison were starting to funnel out of the trees and head in our direction. I aim the camera on the herd but found myself looking between the viewfinder and Anna. I wanted to see her reaction. Her breathing started to quicken and I could see her hands begin to shake. I moved to focus the camera only to find that I was shaking even more then she was. I also noticed my breathing, like Anna’s had also kicked up a notch. The Bison are close. I heard Anna ask with a soft quiet whisper “The top dot?” Her Dad replied “Yes.” As Anna settled in behind the Barnett and the seconds seemed locked in time my heart was ready to pound out of my chest and my hands threatened to knock the camera out of them.

Thump! I saw the lighted nock soar through the air and hit its mark. The Bison bolted off into the trees and time did stop. We all let out a ‘whoosh’ of held in breath and there wasn’t a dry eye in the blind. “YES”. “Great shot Anna.” I was about ready to bust as Travis gathered his little girl into his arms and hugged her tightly. You can’t make times like this, they just have to happen. Emotions were high as I turned away blinking back the tears and pretended to film the empty opening in front of us. We all gave Anna praise and high fives. The smile on her face lit up the blind and is one that I will never forget.

The bison was the first but Anna went on to take a Moreno, an Angora and a stag. Overcoming aversion has made this little girl into a real ‘can do’ Anna. 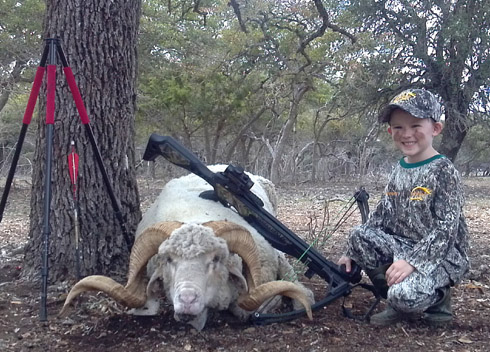 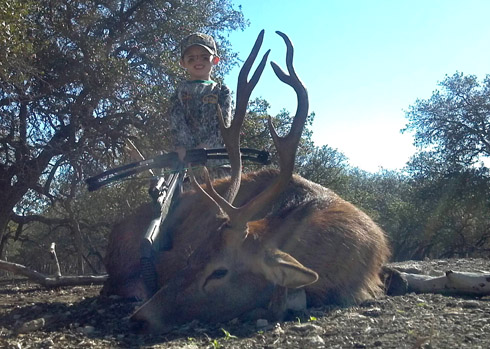 I would like to thank my friend Rich Walton and the great people at Barnett Crossbows for helping make Anna’s dreams come true. I also want to thank Bambi Harrel from Lonestar Exotics, the wonderful lady who put this hunt together for Anna and the many other children battling the same battle. Bambi is a very giving and loving person, without her none of this would be possible.

On The Move Again