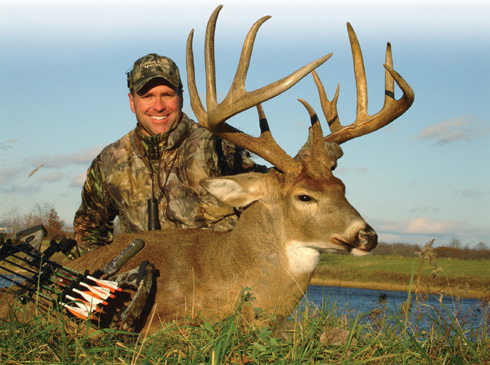 Water sources are an excellent location during teh lockdown phase of the rut. Hunt them mid-morning.

WHEN IT COMES to mature whitetail bucks, no one knows it all. Big bucks teach you something every day. You’re always learning. And just about the time you think you know it all, the deer will throw you for a loop. Big whitetails don’t follow a script. That’s reality.

However, when you’ve hunted many rutting seasons, in multiple places each year, you begin to see patterns and start to put that information to work. That’s another reality. Certain kinds of spots can increase your chances of crossing paths with a rutting buck. These situations and setups change with each of the three phases of the rut.

THE CHASE PHASE:
When bucks are actively pursuing does, you want to set up in the places where the chases end up.

Ridge Points
Steep hill country is hard to hunt. This describes my home hunting grounds, as well as deer woods in many places. Wind is never true in the hills — it swirls and curls and comes from unexpected directions. Bucks use the terrain to their advantage, bedding on ridge points so they can see what they can’t smell, and smell what they can’t see.
During the rut’s chase phase, bucks will push does to the ends of ridges. A doe doesn’t want to get caught, but after she reaches the end of the ridge, that’s where she has to stay. The buck has her cornered, so this is where the action stacks up. These ridge points are the places to be during the first week of November, or whenever the bucks are chasing where you hunt.

Remote Areas
Ridge points work so well because they are remote. When a buck gets a hot doe cornered, he wants her to himself. Where there aren’t ridge points, bucks will take advantage of the next best thing — the most remote places they can find.

During the chase phase, in many places like Illinois, Iowa, Kansas, Missouri and others, look for thickets or dense areas full of buckthorn, willow, tag alders or canary grass. Does end up in these odd, far-flung spots as they try to elude bucks. I can’t tell you how many times I’ve seen a secluded grass field or strip of cover around a farm pond become a magnet for bucks chasing does.

Limited Cover
Mature or dominant bucks will peel does away from other deer, and the chase will often lead them into open areas. Examples include along a fenceline, or in a little swale that runs through a harvested grainfield, hayfield or pasture. These might seem like strange places to set up, but these out-of-the-way spots offer their own kind of remoteness. These are the kinds of areas a doe will end up after being chased.

THE LOCKDOWN PHASE:
It can be frustrating to hunt when the bucks are locked down with does. A buck isn’t cruising or covering ground, so you’re not going to see him, and he is going to stay with that doe until he breeds her. She is becoming receptive, and they’re just biding time until the time is right. Your odds have dramatically decreased. Hunters talk about the rut all fall and wait with high anticipation, but this phase can be a very frustrating time to hunt.

Some guys will take nice bucks, but the biggest bucks are with does. The animals getting shot are often the subdominant deer that are still on the search.

Scrape Areas
Now, a lonely buck will visit scrapes. The does are ready to breed, and any buck that’s not hooked up still has an intense urge to find companionship. The best place to meet up is a primary or breeding scrape. A breeding scrape is bigger and deeper than other scrapes, and it will smell. These areas are often used year after year. Position yourself downwind of the scrape or an approach, and wait. It seems like dark, dreary days are best for this kind of hunting — probably because it’s cooler out.

Does or Food Sources
You can “hunt” the does now, or work the food sources that the does will use. The idea is to get a crack at the bucks that will dutifully stay near the females. The problem with this scenario is, it’s not going to be nice and orderly. The buck is going to be chasing does all over that field or food plot. It will be tough to kill him. Calling usually won’t work now; he’s just chasing, and wants to breed.

The solution is to hunt smaller food plots and feeding areas. If you’re on a 100-acre cornfield, the deer will go chasing off all over it. In a smaller plot, the whitetails are more likely to make a pass near your stand site.

Water Sources
Waterholes are great places to hunt during the rut. Water actually attracts deer in every rut phase. When bucks are searching for or chasing does, they can get by without food, but not without water. They put on the miles, and need to have water.

Natural water sources are good, but you have to identify where the deer are going to come drink, and that can be random. But deer will take the path of least resistance. If you put the opportunity for water close by, they’ll take it. We build food plots to attract and hold whitetails, why not waterholes?

We do this in the bluff country of Minnesota and Wisconsin, and you can do it anywhere. It’s unbelievable how waterholes work in places where water is at a premium or a long ways away. I have found little spring seeps coming out of the side of a hill, sat there, and had whitetails come right in.

Waterholes are very effective late morning through midday. Bucks need water, and they also know that does frequent the area. The bucks will just walk in and start drinking,. If you have a warm and sunny day during the rut, this is the place to station yourself.

NOTE: Build Your Own Waterhole – It’s tempting to try and put a dam across a ravine and try and make a waterhole but then when you get a gullywasher of rain, your dam will blow out. You’re better off digging your own waterhole with a bulldozer or Bobcat. Gently sloping terrain is best. Taper the waterhole down one side – a gradual descent, then when water rises or drops, the whitetails still have a good, easy approach. In sandy sol, use a liner. Build waterholes in the spring so deer can find them in the hot summer months. Set your stands in late summer. Know which winds will work.

THE LATE RUT:
When a buck loses his doe or breeds it, he goes on the move again. This is he late rut. Bucks are still active, but as soon as they find a doe, they’re locked down again. So there’s some movement going on, but not every deer is moving.

The Visibility Factor
Now is the time to work places with great visibility, where you can see the most ground. This usually means open fields. If a buck crosses, you can spot him and go to work. These are great places for decoys on early morning hunts. Use a buck-doe combo (bedded doe), or just a doe. You also have to call to get that deer’s attention. You’ll probably have to rattle to start.

After you have his attention, then grunt. Read his body language. Grunt again. If he comes, great. If he doesn’t, snort-wheeze to challenge him. Dominant deer make that call. If he’s the big guy, he’s going to come over for a fight and to run that little guy (your decoy) out the area.

Good decoy position is important. Don’t put them too close. I’ll put decoys 30 to 40 yards out so there’s room for the buck to swing between me and the fakes.

You want the wind coming from the decoy to you. And you don’t want the decoy too tight to you. I learned that the hard way, and had the real buck approach too close, right under my tree, and I couldn’t shoot. Or the buck could walk behind you and wind you if the decoy is too tight. Between you and the decoy is the perfect spot for that buck.

SCENT NOTES:
You always have to play the wind. During the rut, it’s easy think there is room for forgiveness. There’s not. Carbon clothes help by giving you that edge. Deer won’t get the full whiff of you if there’s an errant breeze. Carbon garments put the odds in your favor and give you a few extra seconds to draw or make your shot on a deer that would otherwise have been long gone. These clothes can create a buffer zone, and buy you time you need.

I keep several garments handy — XLT for warmer days, Dream Season Pro Fleece for raw days. Always use layers, and have extra clothes with you. The name of the game in the rut is sitting and waiting for long periods. You have to be dressed right.

CONCLUSION:
The rut doesn’t guarantee success. Far from it. To be honest, the rut can be a very challenging time to hunt. Your best bet is to understand what phase of the breeding season the whitetails are in, and adjust your approach accordingly. The chase, lock-down and late-rut phases each have their own kind of hotspots where you need to set up for action. Knowing these places can produce the best rut reality of all for you — the need to drag out a good whitetail buck you just arrowed. 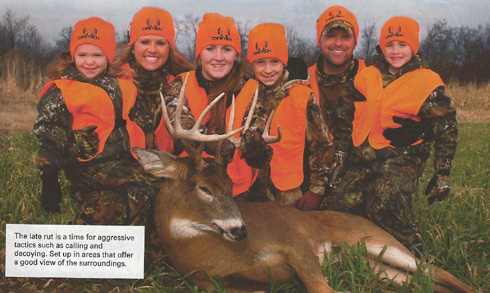 Schaffer Performance Archery- One of a Kind Archery Products