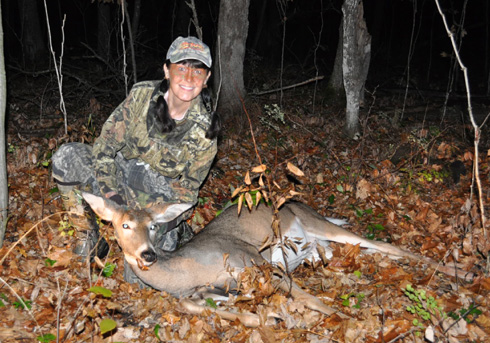 Mystified, and in near darkness, I stood there in the woods.   After hunting, I always Ninja sneak out of my tree stand without a flashlight when I know the deer can’t ID me as a human.  Deer eyes take much longer to acclimate from light to dark than human eyes and I use that as an advantage to exit undetected.   I searched for my two spent arrows and mentally kicked myself for what I thought were two botched shots.   To find spent arrows is an ethical thing for me.   I clicked on my mini-mag flashlight and searched.  It was under gunned so I switched to a tactical flashlight.   “Found it” I said to myself.  The first arrow was an 18 yard gimme shot.  But I could not find the second arrow at 35 yards.    I clicked off the flashlight and thought about it.

In practice, my in-string peep site would sometimes twist wrong so I could not see through it.  I would torque it a bit with my fingers and it would be fine for many more shots.  The walk to my tree stand that day was noisy with the wind having dried all the new fallen leaves.   This stand was ¾ mile in and sits off a small green field/food plot.  Everything was going right.  I’d arrowed and gun killed many deer from this stand in the past, and I had arrowed another deer already so I was in the groove.   I no sooner settled in and it started to rain, first sprinkle then pour.  It was after 5pm and the deer “magic hour” of feeding was coming up fast.  But deer don’t like to move in a woods noisy with rain.  I hoped it would let up because I was not wearing rain gear.

An hour later, the rain stopped and the deer sprang to feeding within 5 minutes.  Two deer startled at falling acorns and ran right under my tree stand and stood there.   My adrenalin was pumping like liquid  lightening through me.  I had my range finder in one hand as I watched them 50 yards away, and now here I was not ready for the shot.  In slow motion I lowered the range finder, put it in my pocket, slipped my hand on my bow and my release calipers on the bow string loop.   I went to pull my bow back but could not pull it back.  The after effect of the adrenalin left me too weak to pull my bow!   The deer kept walking slowly to 18 yards.

I pulled my bow again, now totally in the zone, aimed for the heart/lung area and let the arrow fly.  It flew alright… three feet to the right of the deer.   The peep sight had malfunctioned at the moment of truth so my non dominant eye took over and I missed the shot.   The deer now had walked to 35 yards and stopped.  I went to full draw again and the peep malfunctioned.  I let down on the bow string and adjusted the peep.  I pulled a second time, and still could not see.   The third time, I could see through about 1/3 of the site, just enough to get a good aim on the deer and let the arrow fly.  I was sure it was a good shot.

The deer startled and bolted into the woods.  It stood looking my direction from 50 yards away, and then meandered around feeding until out of sight as if nothing happened.   “I could NOT have missed, but I must have missed”, I told myself standing there later in the dark.

Then the Aha Moment hit me like a brick:  Maybe I DID arrow the deer successfully and it didn’t know what hit it, so it wandered off and tipped over without a fuss?

“And pigs fly, too” I thought to myself.    Usually deer do the death run, pile up, and make a racket when they succumb to a shot, whether gun or bow.   I went with my flashlight to the edge of the field where I saw the deer run.  BLOOD TRAIL !!  I was euphoric!    It was your classic blood trail, clear and bright red.   It led to where I saw the deer start its feeding.  It circled around a small area and the THERE IT WAS!  70 yards away from where I shot it in the field and a perfect lung/liver shot.   I thanked God… it seemed like a miracle.    But the arrow was nowhere to be found.  I raced back to camp, change clothes and took the ATV back to get the deer.  Once loaded, I again searched for the arrow.  I found it in the leaves where the deer had been feeding.

Some good lessons were learned that day.    One, never let any kind of equipment malfunction go unattended, no matter how small.  Two, never assume you missed your target when you think your aim was true.  Always find your arrow.  And three, always take the time to look for a blood trail.  Too many hunters give up looking for a deer too soon because they don’t think they had a good shot or they are just too lazy to look.  Ethics demands our diligence when harvesting game animals.  And Aha Moments prove that.

*Whitetail deer are color blind, that is, they see similar to humans with
red/green colorblindness. Deer cannot see red or orange.   They can see blue,
and green/yellow.

*Deer are made to see in low light conditions.  All eyes have rods and cones.
Rod photo receptors are for dim light and cones are for daylight.  Rods
outnumber cones 20 to 1 in deer.

*When going from light to dark, human eyes adjust very quickly.  Deer eyes
adjust more slowly, especially when “in the headlights” where it can take an
hour or more for deer eyes to adjust.

*Deer can see in UV, that is, like a black light.  Human eyes filter out Ultra
violet light.  Deer eyes do not. Clothing with brighteners or phosphates in
launday soap, makes your clothing glow bright blue to a deer even if you are
wearing camo.

*Deer have “binolcular” vision, since their eyes are on the sides of their
head.  Their only blind spot is 60 degrees directly behind them.

-Deer have an uncanny ability to detect movement across a wide visual field.  If
you can see a deer’s eyes, it will detect your movement.

The Truth About ‘Deer Scent’

The Truth About 'Deer Scent'