The Truth About ‘Deer Scent’ 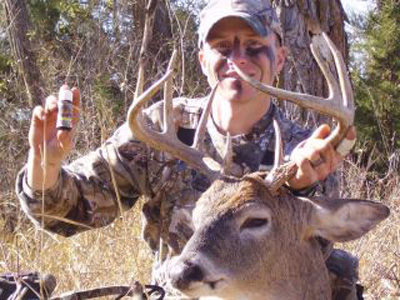 Hi, my name is Cavan Sullivan and I own Timber Valley Fresh Scent. I want to attempt to address some of the questions I have received from customers and forum members over the last weeks.

Let me first start out with a statement that we can all agree on. “Deer scents are created equal, but it is what happens to that scent following collection that sets it apart.”

Deer urine is an organic compound rich in nitrogen and other byproducts of cellular respiration. Like all other mammals, the primary function of urine is the removal of these harmful elements from the body. As several posters have so eloquently put it, the excretory organ (the urethra) is located geographically near the opening of the reproductive system (the vagina). While not identical, mammals (humans included) share many of the same reproductive organs and the smells associated with it.

When a female is in heat or estrous her ovaries (which are part of the reproductive system) releases eggs that are mature and ready for fertilization by sperm from a male. These eggs travel down the fallopian tubes toward the uterus. If sperm is present in the female’s reproductive tract these eggs will become fertilized and will implant in the uterus.

All during this cycle varying amounts of chemical communication compounds (pheromones) are secreted from parts of the reproductive system to indicate to males the readiness to accept a mate. It is because of the proximity of the urethra and the vagina that naturally secreted urine has such a value when used as an attractant.

The human reproductive cycle is referred as the menstruation cycle and in this process if conception doesn’t occur the endometrium (the lining of the uterus) is shed and expelled through the vagina. This material is full of many of the pheromones from the reproductive system and being mammals many of these communication chemicals are similar between different mammal species.

This explains why guys have had some luck using used tampons. On a side note a study was done recently plotting the tips strippers received from their client. The study found that strippers who were on a chemical contraceptive (birth control pill) which alters the natural cycle received significantly different tips than those who were still on the natural cycle. It showed that during the times of the month that the women were most fertile or likely to conceive that there was a significant increase in the attractiveness they had to the male clients. This study demonstrated that as much as we hate to admit it, humans are very much animals. We cue in on many of the same chemical communications used by animals subconsciously.

Whitetail does go through a slightly different cycle than humans called estrous. The primary difference is the fact that female deer reabsorb the endometrium rather than expel it. The estrous cycle consists of 4 phases (Proestrus, Estrus, Metestrus, and Diestrus. You can visit http://en.wikipedia.org/wiki/Estrous to get more particulars of each phase, but the gist is this; during Proestrus their body matures several eggs and the endometrium starts developing. This is what we hunters call the ‘Chase phase’.

These does are not yet receptive to males but their bodies are starting to produce the pheromones that will soon advertise sexual readiness. The next step is ‘Estrus’. During this phase does will stand and breed with a male of their liking. It is during this phase that we see bucks tending does.

This is called ‘mate guarding’ and bucks intend to monopolize a female by keeping her from mating with another male while she is in estrus. During this time a buck may breed a doe multiple times and may last 48 hours.

Following this ‘Metestrus’ begins and the effects of the estrogen start to subside as progesterone is secreted. Finally if no fawns were conceived ‘Diestrus’ commences, and the endometrium is reabsorbed to be used in the next cycle which will begin approximately 21 days later.

In deer the estrous cycle is dictated by the light-dark cycle and the shortening of day light exposure in the fall triggers the onset of the Estrous Cycle in the wild. See http://www.youtube.com/watch?v=4iaNx-Y362E to see a video showing this!

Ok, so what is deer estrous urine and where does it come from?

While I cannot speak on the methods of other producers, here is how it is done at Timber Valley Fresh Scent.

By knowing hormones that govern the natural reproductive cycle, humans have been able the manipulate reproductive cycle in multiple species. With the growth in popularity in artificial insemination in whitetail breeding, agricultural scientists have perfected the administration of these hormones along with the timing the necessary for optimizing conception rates. Deer farmers can also use these same hormone injection regimens to bring does into estrous for the purposes of collection of urine.

Physiologically a whitetail doe is capable of producing around 16oz. of urine per day, so given this fact and adding it to the above of an average of 48 hours of estrous, we are left with a maximum of 32oz of estrous urine available from a doe per reproductive cycle. So estrous scent is a very precious commodity and the sheer volume of ‘Estrous’ scent sitting on the shelves of today’s retail outlets is highly suspicious.

Since there is no quality control organization for deer scent the majority of scent on the shelf sold as estrous was collected and bottled the previous year. So already the store bought urine in your bottle is in most cases a minimum of 12 months old, a long time to be sitting at room temperature.

At Timber Valley Fresh Scent we use a hormone therapy to bring our does into estrous. When they are approaching the peak we bring them into collection stalls with high density plastic slatted floors. Does are left in the stalls during this 24-48 hour period and allowed to urinate naturally, which usually includes squatting and urinating over the tarsal gland (another scent communication organ). The urine drips through the floor onto a plastic floor that slopes at a slight angle toward a refrigerated collection bucket for each stall. From here we put the urine twice daily into bottles and ship it to our customers usually within 48 hours of collection.

So the urine laden with estrous signaling pheromones is now in the bottle, how long is it good for?

Most of us are familiar with the burning ammonia smell released when a bottle of store bought urine is opened for the first time. This comes from the degradation of the urea which is excreted through the kidneys from dietary proteins. Based on my own chemical research, I have found about half urea (the nitrogen) degrades to ammonia over the course of 2-3 weeks and the attractive power (the pheromones) in the scent significantly decreases over that same period of time.

Probably the biggest factor influencing urine quality following collection is the build up of bacteria. Bacteria feed on the rich nitrogen molecules in the urine and can exponentially multiply over a short amount of time. Because of this, steps must be taken to prevent the build up of bacteria. Some manufacturers who want to place scent directly on a store shelf add a preservative such as sodium benzoate to the urine which interrupts the replication cycle of the DNA in the bacteria. These manufacturers maintain that sodium benzoate is scentless and tasteless but when used as a food preservative up to 1 in 4 people can taste it. I think it goes with out saying deer smell it.

Like mentioned before, bacterial growth and conversion of urea to ammonia are the two biggest enemies facing fresh deer scent. To combat these we have found that keeping the urine cold during and after collection and during shipment does wonders in keeping the scent fresh without having to add a preservative. Hunters are also encouraged to keep their scent bottle in a refrigerator once they receive their product. Some companies advocate freezing their product. In my personal opinion this is far and above the off the shelf products, but when compared to fresh chilled scent its falls to second. If you have ever used frozen deer scent you are probably familiar with the white precipitate that forms at the bottom of the bottle upon thawing. This is actually part of the product that was suspended when the product was fresh. When any molecule is frozen then thawed the molecule swells and contracts and this causes fractures of the highly complicated organic molecules. An example is milk. Milk that has been frozen then thawed is never the same.

If you have read this far, thank you. I hope this has provided you  with more insight into the topic of deer scent. I am happy that there are a handful of companies who have decided not to conform to the ‘old way’ of scent production.

One on One Elk - Montana Style