WHITETAILS – Cut Them Off Going to Bed 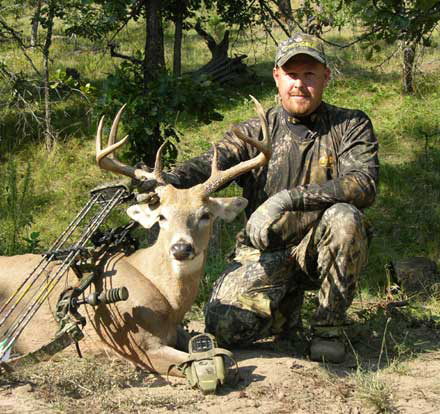 Author with his WY buck.

I absolutely love hunting whitetail deer in the morning, but except during the rut when bucks move all day, morning hunts can be quite difficult. Finding a morning stand where you don’t bump deer on the way in is tough, but during the early season you can work a little harder and find stand locations that will allow you to cut bucks off on their way back to bed.

During most early seasons, especially those in September, whitetails are on regular feeding patterns that generally find them coming out in the evening, feeding at night and heading back to bed early the next morning. You can’t hunt the field edges where the deer are feeding because you will inevitably spook them. The best bet is to find a travel route back to bedding areas and intercept them on the way. The farther off the food source you are, the more chance you will have of seeing deer during good light. It is surprising how far deer will travel from bedding to a food source like an alfalfa field and back each day.

The key to this type hunting is using good optics from a distance to scout and exercise patience. If you bump deer of their preferred travel route once or twice, you will push them more towards being nocturnal, especially mature bucks.

I like to find a high point overlooking alfalfa, soybeans, etc. and watch deer for a couple of evenings and mornings if possible. If you can find a trail where the deer enter the field in the evening, and watch it again in the morning and see them take the same trail, you know it is a primary travel route. If it is broken country and you can watch off and on as the go back to their bedding areas in the morning, you can pick a likely ambush site to hang a stand during midday.

Last year I bowhunted in northeast Wyoming during the first week of September. Deer were feeding heavily on alfalfa, but due to drought, acorns were beginning to drop and this fact held deer up getting to fields in the evening and slowed them down going to bed in the mornings. They just couldn’t pass up the acorn candy as they traveled. This really hurt the evening hunts as the deer didn’t reach the fields until late, but it helped mornings as they were still moving later on.

I setup my trusty Nikon spotting scope on a high bluff where I could glass three different alfalfa fields and watched for a couple of mornings. There was an area where deer were feeding on a high filed, coming down a steep hill and crossing a main valley and heading back up a narrow drainage to bed on the opposite ponderosa pine covered hillside. It was at least a mile between the food source and bedding area, and I figured if I went up the narrow drain a couple hundred yards, I could get in early without bumping deer. As a bonus, there was a small waterhole at the mouth of the drain.

I didn’t hunt the spot until the last morning of my trip, and I had a buck and a doe tag. I fired up my ThermaCELL to keep the bugs off and decided to take the first mature deer that camethrough. It just so happened to be an old doe. She came right up the drain and gave me a 16 yard broadside shot. She ran 40 yards up the hillside and dropped. That was only about 30 minutes into the hunt so I decided to sit tight.

An hour later, I saw the glint of sunlight off an antler, and I spied a nice 8-pointer near the waterhole about 80 yards out. I only saw him for about five seconds, and he disappeared. After ten minutes of watching, I gave up and figured he went the other way, but suddenly he emerged from a tangle of brush only 20 yards out and was headed straight for my tree.

My stand was in a 15 yard wide row of trees and brush that ran up the center of the drainage, and the side of the drain in font of me was grazed grass starting about ten paces from my stand. The buck came on a steady walk toward me as I gently lifted my bow. He stopped straight under my stand, and I watched him for what seemed an eternity between my feet. I could see that he was a mature buck and I guessed him at 17-18” wide. There was no doubt I would shoot him if given the chance.

He walked straight away from me toward the grassy open, and I drew while he was straight away. He heard me draw as he bounded to the edge of the cover, and I held my BowTech Tribute at full draw. Finally the buck stepped into the open and paused quartering away at a mere 15 steps. I touched off the Tribute and saw my Lumenok disappear at an angle that I knew had taken out the heart and lungs. I recovered the nice Wyoming 8-pointer a short distance up the drainage and thanked the Good Lord for allowing me to take a pair of mature whitetails on the last morning of my hunt.

Being patient, glassing from a distance and choosing a stand location that allowed me to get into position without bumping deer off their food source or travel route were the keys that allowed me to successfully intercept these Wyoming deer. Of course it goes without saying that the wind was right.

Morning spots are tough to come by, but in early season when deer are still fairly predictable on feeding patterns, with proper scouting and stand placement, you can swing the odds in your favor and be consistent in taking whitetails with stick and string on their way back to bed. There isn’t much better than arrowing a nice buck first thing in the morning. That is a great way start to any day!

The Truth About 'Deer Scent'