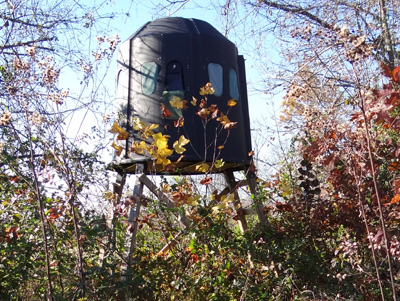 Early afternoon, Jeff Neal got me and my gear into his electric Polaris and we drove to a deer stand Looking out over a corn field edge. The stand is a Turtle blind. It’s a round top plastic contraption with 8 vertical shooting windows.

I don’t know why they were there, but I when I climbed in I noticed a dozen or so red hornets on the clear plastic shooting windows. The clear windows swivel open and I opened some up right away in case some of the hornets wanted to boogie on to somebody else s Turtle blind.

Each shooting/viewing window has camo mesh and black fabric in addition to the clear window. I’ve hunted in the Turtles before, both on the ground and elevated. This one is off the ground 10 feet.

Later on two does walked out of the trees 100 yards away and slowly browsed through my food plot toward my corner, 35 yds was as close as they got as they passed me and went out of sight. 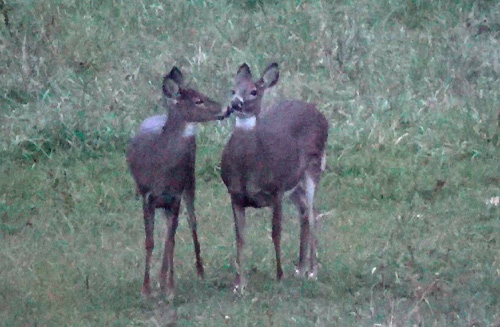 Another doe just came out of the trees to the east at the top of the hill — 200 plus yards away. Then 3 more does came out of the west side. Before it was over I had seen 13 does.

Brian Richard picked me up we went back to the lodge. Eleven hunters were out today. There were many deer sightings. And unlike me, they saw mostly bucks. No one brought in a deer today.

Jeff Neal grilled steaks for everyone. They were thick and juicy … and very tasty. Perfect.

One of the cool things about Writers Camp’s is you get to spend time with people that you know but don’t usually have time to visit with. Here’s the real C.J. Davis, wild turkey hunting big dog. We’re hanging out tonight at the writers camp.

Mike told us that Harold Knight and David Hale, the founders of Knight & Hale, are back doing what they do best; new product research, development and design. Mike demonstrated the new EZ Grunter Extreme and Death Chanmber deer calls. Moutltrie is now a major player in the Game Camera world. Taking a high quality picture is their #1 priority. Mike showed us some 2012 new Moultrie cameras that have technology that takes night time picture taking to an all time new level.

He passed out several Code Blue deer scent products. Code Blue bottles scents from single deer; be they buck, doe or estrus scents. The scents of dozens of deer are not mixed together like many other brands are. Mike introduced the new Grave Digger, pressure sealed soil with buck and estrus scent. You can create a mock scrape with it or sweeten and existing scrape. Mike showed us the Summit Titan climbing treestand. This stand truly makes treestand hunting comfortable.

After the meeting Nancy Ryan got out a couple of different pies and we all had desert. Then everyone talked and visited until almost midnight and then went to sleep later than we should have.