by Robert Hoague
in Bowhunting Blog
0 0
A A
1 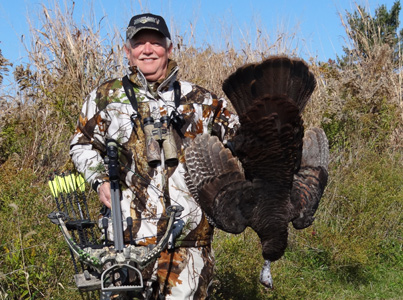 The last bowhunters to arrive, Jim Miller and Rusty Weed of the Great Southwest TV show, drove in at 2-pm. It must have been hard to get up at 5:00 with the rest of us, but he did.

I got out early and sat in the blind waiting for daylight. It was 34 degrees, not much wind and the darkest of dark mornings. Early on, I saw a few small doe groups on the 200 yard hill. They came from both sides of the food plot. The rest of the morning was uneventful.

When I got down I took a package of the Grave Digger that Mike Matley (of Pradco/Code Blue) showed us the night before and sprinkled it under some tree limbs at the edge of the food plot … near my stand.

Back at camp ourdoor writer Joe Byers brought in a wild turkey that happened by Joe’s ground blind this morning. He made a 20 yard shot with his Darton Serpent crossbow and the new Grim Reaper X-Bolt broadhead dropped it in a few yards.

I went out early for the afternoon hunt. It was very overcast and in the 50″s. No wind. The weather said it might rain later. Yesterday afternoon  I saw deer ok once the sun got low in the sky. We’ll see what comes down today.

At deer-30 I saw a black animal on the 200 yard hill and glassed him with the Nikons. Never seen a skunk with a solid black tail, until right now. He was a big one too.

A doe walked out of the brush on the right side of the food plot. She went straight to the skunk and walked around her. She was right in the skunks face and I figured she was gonna get it any second. But the skunk didn’t spray her.

I waw 4 more does. Two of them came my way and I would have shot but didn’t get the chance.

The other guys had lots of action. Mike Jordan saw a big 9 point and Jim Miller saw a very wide, heavy beamed 7-point. The buck walked through his area only 15 yards away but got past Jim’s shooting window before he could shoot. Rusty had the wide buck on video and I took a pic of it off his camera. 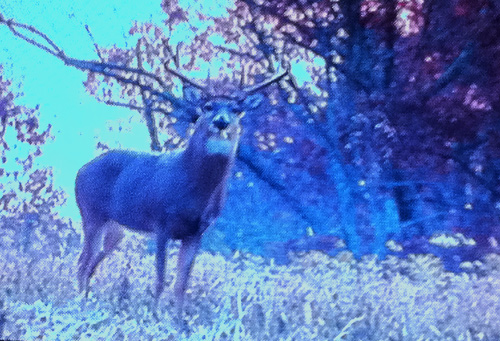 Bob Humprhey has a nack for seeing big bucks and he saw two fine trophy bucks just beyond his range.

For our after dinner Writers Meeting C. J. Davis showed us Nikon’s newest Archer’s Choice rangefinders for bowhunters. They automatically adjust for off the ground shot angles. And it ranges out to 200 yards. The camo cover for it is form fitting and you can use the rangefinder with it on. Something I like about the Archers Choice is you can hold it and range game with one hand. You don’t have to set your bow down. He showed us the new Pro Staff 7 binocular. It is 10 x 42 and is priced at $199, a real bargain for a quality binocular.

C.J. told us that Nikon is committed to make optic products for bowhunters and crossbow hunters as well as firearm hunters. He showed us Nikon’s new Crrossbow Scope. Each one of the writers received on of these scopes, myself included. And Bruck Ryan arranged for each writer to receive a crossbow from Darton Archery. I got a coal black Scorpion and am using it on this hunt.

Above is my video of C.J. Davis showing you the Nikon Pro Staff 7 and Archers Choice rangefinder. Plus, C. J. tells us (1) how to select binocular for your particular requirements, and (2) how to adjust your binoculars for the best possible clarity andviewing.

New 'RIBZ' Frontpack - Puts it all Up Front