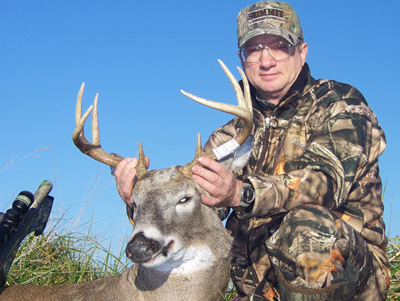 Clear, sunny, a little breeze, but no deer for the first hour. It’s so nice out and Jef Neal’s food plot is so green I expect that any minute golfers could walk out into it.

Later. A sole doe is on the hill 110 yards away. And a buck came out and walked toward the doe. The doe started walking toward me and he followed her.

As they were getting closer three other does came into the food plot 100-plus yards away. The buck, a mature 8-point, veered off the doe he was behind and went over to the other does and the does left. He fell in behind the first doe again. The doe came in range. I was ready, I just needed the buck another 20 yards closer. But the buck stayed back just out of range and watched. Then he worked a scrape at the end of the woods and went into the trees. At 10:00 I returned to the lodge.

Tim Dehn came in with an 8-point buck and I took his picture. Tim shot it at 26 yards with a Darton crossbow and a Grim Reaper X-Bow crossbow broadhead. It went 80 yards and dropped. 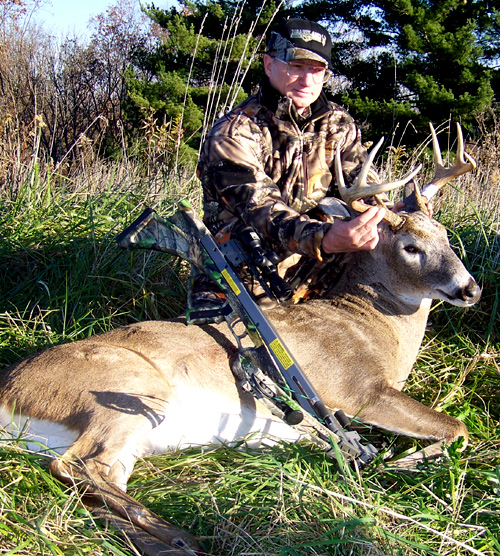 Tim Dehn is a mover in the archery and bowhunting industry. He owns Arrow Trade magazine.

On the hunt I did a video interview with Tim Dehn about his involvement in the archery and bowhunting busness. And he talks about his magazine Arrow Trade, the bowhunting and archery industries leading trade magazine.

Tim Dehn’s magazine Arrow Trade is on the web at www.ArrowTradeMag.com.