A Bowhunting Rollercoaster Ride For Antelope

by Brady Miller
in Bowhunting Posts
1 0
A A
0 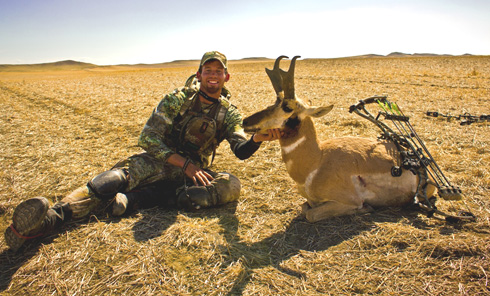 This time stalking worked out just the way it should and the shot was perfect.

It was now or never. Through the rays of the hot summer sun, visions of previous stalks were racing through my head, stalks that didn’t conclude the way I wanted them to. I took a deep breath to clear my mind. In one fluid motion I drew my bow while crouched over and went upright on my knees while steadying the pin like I have done the entire off season and released a well placed arrow that found its mark in the side of a beautiful buck antelope. Immediately after the shot I was filled emotion known only to archers who culminate a difficult stalk. Moments like this are ones to cherish!

It seems like only yesterday that I was on a stalk for a buck mule deer during a bowhunt in November and already the 2011 season is making its way across the western states. The thrill and rush of bowhunting antelope is something to experience. These speedsters of the prairie can make you look like a fool in an instant and leave you in the dust wondering what went wrong. This year was certainly no different! That’s what keeps all of us bowhunters coming back to the desert country year after year.

I had six days off of work to bowhunt starting the second day of the 2011 season in Montana. On this hunt I would be meeting up with my good friend Tim Ostlie on the morning of August 16th and the rest of the week we planned to hunt and hunt hard. After what seemed like an eternity at work, I finally made it home to throw my gear into the truck and after a few hours’ sleep I made the long drive to the hunting location just before sunrise. After a few quick conversations about the drive, and our 2011 bow setups; we quickly switched focus to the task at hand.

Day One and Two
The first two days were spent getting a feel for a few areas by locating waterholes, trying to find a common pattern in food sources and locating home ranges of the larger bucks. Most of the aggressive bucks had already located harems of does so it would make for a low percentage stalk with all those eyes in the field. It was a difficult decision but we skipped working those types of bucks, and concentrated on smaller groups. Stalk after stalk was made these first two days, but things just didn’t go our way. 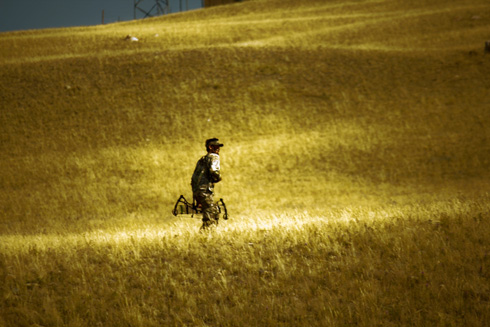 Day Three
It wasn’t long on the third day before we started to glass up antelope. We passed up stalks at smaller bucks right as the morning sun was cresting the eastern sky and 30 minutes later we found ourselves getting busted by antelope before we could get into position for a shot. That’s spot and stalk antelope bowhunting! After our blown stalk we soon located a pair of antelope on a hillside.

This time my sights were set on trying to fill a doe tag and luck would be on our side, as these were two does all by themselves. The stalk seemed perfect due to a small rise in the terrain which would enable me to get in range before they were aware of my presence. Soon enough I caught a glimpse of them feeding their way from right to left and I knew I was getting close. Only problem was that I was rapidly running out of cover. Before I could make another move I needed to poke my head above the grass and get an accurate reading on my rangefinder. With the height of the grass, I needed to expose more of myself than I would have liked and the does instantly started to stare holes through me. The rangefinder read 96 yards so I quickly set my single pin moveable sight to that exact range and came to full draw.

After leveling the sight bubble and quickly calming my nerves, I released an arrow and heard the telltale sound of a well placed broadhead. I watched as the doe went 80 yards before piling up. After a round of pictures, we took care of the doe, and got the meat cooled off as the sun was going to heat up the prairie soon; marking the end to a successful day.

Day Four
Things happened very similar to the past three days on the fourth morning of the hunt with an early alarm clock ringing in my ear and more failed stalks. You can practice all year long, tune your arrows and your bow till you know it like the back of your hand, work hard in the gym and on the trails but you can’t prepare for the crushing moment when a buck of your dreams gets away. My friend and I spotted this bruiser of a buck off in the distance and instantly we knew it was a shooter. This was one of those bucks that you didn’t need to grab the binoculars or the spotting scope to dissect his horns.

I worked my way around the backside of the buck and my friend worked his way down a small fold in the terrain towards the buck. As luck would have it, for whatever reason, the buck had that sixth sense and must have heard my friend. The buck got up and started to walk toward me, but I couldn’t see the buck doing this because of the small hill between us. The buck got within 35 yards and would have been broadside to me as he was looking back toward my friend. I never knew he was there until I peeked above the grass and saw his horns.

I quickly tried to get a range and then draw my bow but by this point the buck spotted me and ran out of the country stopping at 180 yards to give me one last look, as if to say “Sorry, next time.” That was the largest antelope buck I believe I have ever laid my eyes on, pushing the 80 inch mark. The highs and lows of being a bowhunter…I felt CRUSHED!!!

My friend had to leave early in the afternoon for work so I elected to hunt by myself that evening. After what seemed like an eternity of glassing from a high vantage point in the heat of the afternoon, I spotted a lone buck. This was a perfect spot for a stalk, a shooter buck bedded by himself in a coulee, IDEAL!

After planning my line of approach and taking a few pictures to help find that exact spot once I got above the buck, I headed out. Even with pictures of the coulee the buck was in I realized that I still hadn’t belly crawled to the right location once I spotted the buck bedded down further along. So I had to turn around and belly crawl back behind the ridge and work my way down further. By this time I had quite a few burrs and sharp dried grass stuck in my wool socks, add to that some August heat…all adding up to an intense afternoon.

Carefully I worked my way over the ridge and into the coulee with the buck. I was busy rangefinding the buck and belly crawling when something caught my attention. To my left I had a herd of cattle grazing. I was now within 90 yards of the bedded buck and just when I thought things were going my way the cattle took note of my presence and instantly the bedded buck turned his head and looked straight at me. I had no time to react since I was still on my stomach and the buck bolted from his bed. This is the second time I have had cattle wreck my stalk, once on a big muley buck in 2009 and now on a nice antelope.

Day Five
Temperatures had been dipping into the upper 30’s at night which was making it great for putting on a lot of stalks early before the heat. Stalks one through five didn’t pan out this cold morning. I either got busted due to the herd spotting me or stalked within range on bucks but elected to pass on them in hopes of something bigger. With my days of hunting winding down, I knew I needed to calm down and think things through before making my stalk and ultimately taking my shot.

It wasn’t very often that we spotted bucks bedded alone, as most were starting to gather their harems. So I immediately jumped at the chance to try a stalk on this buck we located. After running my way around the buck to get both the wind and the terrain right for a stalk, I started the careful task of belly crawling toward him. I later found out the temperature was right at 97 degrees during my stalk, which always adds a great level of difficulty. Once I got close things happened fast, so fast that I didn’t have time to range the buck a second time to confirm my yardage in fear that he would see me and bolt. So I placed my slider on 71 yards, drew back to settle at my anchor points and sent a 479 grain arrow his way and watched it punch through the sweet spot! It was easy tracking in this flat country as we were able to watch the buck fall down. We made quick work of a photo session and got the buck taken care of.

I made a total of 34 stalks on bucks during this hunt. What an intense week of bowhunting public land. Highs…lows…and backstraps! Every stalk I learned something new that ultimately lead me toward punching my tags. Just as every bowhunt I am on, it’s the small things that counted most toward leading me to success. The entire off season is a time of year I cherish because it gives me a chance to tune my gear and train hard in the gym and on the trail. I feel all of these aspects are very important for a bowhunter.

Sometimes looking back…the road to success is just as sweet as the harvest itself, but success sure does taste good and boosts a bowhunters confidence.

Finally, A Chance To Shoot