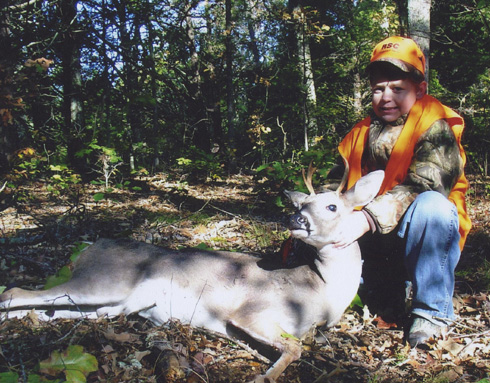 Sponsored by: Dead Down Wind

It’s that time of the year again when you break out the old sticks and string’s and practice for the upcoming whitetail season.  I see this every year, when I start scheduling the hunter safety classes. I talk to hunters young and old and am always amazed with the young boys and girls enthusiasm of getting their first deer.

I have been a Hunter Education Instructor for the past 23 years and look forward to each new season and all the new faces. This year I had the privilege to teach my little buddy Drew. I met Drew when he was 10 years old and eager to learn about deer hunting. He was fascinated to see me shoot my bow and soon after, he got his first bow. Drew and I practiced through the summer and early fall; he was ready and waiting for opening morning.

Well, opening morning came and went but we never even saw a deer. To see Drew experience opening day was a thrill for me through as we shared it together in our buddy stand. We had no luck during archery season so we turned our attention to the upcoming firearm Youth Hunt. That too would be Drew’s first.

We scouted an oak ridge and set up his new Double Bull Blind. Opening morning broke and  Drew was up at 4:00 am, at my door in his camo with his mom. I opened the door to a bright, cheerful smile he had the whole time waiting on me to get ready. I have to admit I was pretty excited about taking my little buddy on his first youth hunt. I’m an archer by heart and don’t own a lot of guns but I did have a 20 gauge pump. Knowing how little Drew was I only let him shoot it a couple times as I didn’t want to make him gun shy.

Armed and ready we slipped into our blind before first light,  full of anticipation of Drew seeing his first deer. Shortly after day break he was eye to eye with a mature doe that busted us. Drew was “Wow that was cool”.  I told him to be quiet and maybe more deer would come in.  Next thing we knew in came a small five point. I helped Drew steady the gun on the blind cross braces, one shot and he harvested his first deer at 15 yards. Talk about up close and personal.   Drew looked at me and asked why he couldn’t stop shaking, I told him welcome to Buck Fever.

This leads us up to our 2011 bow season where  Drew was determined to harvest his first deer with a bow. We worked through the summer, scouting, hanging stands and placing trail cameras and working food plots. With opening day approaching fast we first had to go shopping to get Drew some new camo as he had grown some since last year.

We wanted to be in his favorite buddy stand and no sooner had we  gotten into the stand we watched a flock of turkeys move through the area.  I was watching them as they moved out of sight when  Drew told me not to move and hand him his bow. We had our first deer, a big mature doe. It just doesn’t get any tougher  even with a seasoned  hunter let alone a second year 11 year old .

Both of our hearts were pounding double time as Drew rested his bow on my knee as he waited for right time.  As we watched six more does fed into that small,  2000 square foot food plot. We had lots of eyes scanning for any sigh of movement.  Drew took a deep breath and slowly came to full draw, settling his pin on the larger doe. Then a hunter’s worst sight, the wind changed,  tails flew up and the does shot out of the plot,  snorting and blowing as we watched them bolt out of sight.  I felt so bad. My little buddy had deer so close after working  so hard only to get busted. I asked him if had washed his new clothes in the Scent Control soap and showered like I told him. Drew said he had asked his mom to wash his new hunting cloths with  my special soap but, because Drew has skin allergies his Mom had decided not to. She also advised Drew to not chance the soap when showering either. So, missed opportunity, didn’t ensure a scent free environment and when the wind shifted every deer in the field knew there was a human in the woods.

Being scent free is one of the most important aspects of being successful in the field. To ensure that we would both be scent free I assured his Mom it would be OK and took his cloths home to wash myself. I also assured her that having Drew shower before our next evening hunt in scent eliminator soap I gave him would not aggravate his skin allergies. The next day when we went into the woods I was confident human scent would not be a problem. Drew was as scent free as me this time.

No sooner had we gotten into the same buddy  stand a button buck came and feed on white oak acorns directly under our stand. This buck was soon followed by four does. Knowing we were both scent free I felt good about the day even though all four were downwind in the same small food plot. They had no idea we were there. That night Drew was on cloud nine telling his Mom that our magic soap hid him from being detected by the deer that feed all around us. No deer bolted that day.

But bow season ended without Drew taking a deer so it was on to Drew’s second youth hunt that we missed opening morning and I told him we would be in our corn field stand. Drew now would get a chance to shoot his new Remington .243 we bought over the summer and he was pumped and ready. His Mom asked if we were going to use our magic soap again.

Shortly after getting into the stand a button buck and fawn came feeding into the corn field. All of a sudden we heard a grunting noise in the evergreens and the two deer quickly left the field. This was another first for Drew who had never heard a deer grunt before.  I told him to hold tight they would be back  when out walked the biggest doe I’ve seen. Drew was in a panic because she was downwind but I knew we were fine.

Drew steadied the .243 and squeezed off a shot, dropping the doe where she stood.  This was Drew’s second year and second deer, my little buddy was on a roll.

We got home after showing off his prize doe. Drew told his mom all about the hunt , the deer talking to each other and had shot her down wind and she never knew we were even there.  “We owe it all to Del’s  Magic Soap” he said.  I gave my little buddy and his mom a hug and told them, “It works like magic but it’s not magic,  it’s Dead Down Wind and there is nothing better.

To make sure your hunts are more successful and you stay Scent Free go to: Dead Down Wind

HHA Sets it's Sights on BHN