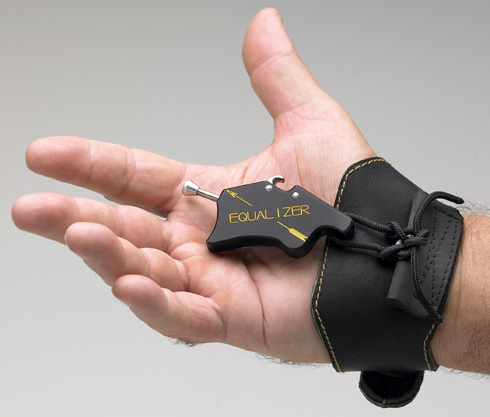 The Equalizer Archery Release Aid from Goat Tuff Products has revolutionized the sport of archery by allowing the archer to increase their bow’s performance and arrow speed. Without increasing the draw weight. For 2012 the Equalizer has been redesigned to be even better.

GOAT TUFF President Jerry Smith had this to say, “The Equalizer was designed for short draw archers or those that have had to shoot lower poundages due to age or injury. These archers where pretty much stuck with the performance of their bow due to draw length and weight limitations. With the Equalizer Release the archer can increase performance by approximately 10 fps for each inch of increase up to 3”. This year’s model now features a wider draw finger shelf for greater control and ease during the draw and a repositioned Plunger Trigger that provides additional distance when at full draw, between the bow string and the trigger.”

Smith added, “We are also adding an adjustable metal buckle so the Equalizer will be available with either the standard Velcro® closure or the new metal, double tongue buckle. We’ve also added some new graphics.”

First Lady of Hunting: Brenda Valentine:   Equalizer Release Aid …  By increasing my draw length I will automatically pick up more speed without increasing draw weight and we all know this is a distinct advantage when hunting keen-sensed game. My only question is; where was the Equalizer when I was obsessing over speed, hot-rodding my bows and still coming up slow?

2009 Winner ‘Extreme Huntress’ Contest Winner: Rebecca Francis: I feel like the Equalizer is truly a miracle for those of us in the archery world with short draw lengths.  Whether you are a shorter, smaller, younger or older archer, man or woman the Equalizer lives up to its name because it allows you to increase arrow speed and performance on the range or in the field to become equally competitive against the longer draw archer/bowhunter.  I now have the ability to shoot 10 fps faster PER INCH of draw length gained!  That in turn increases the kinetic energy released from the bow, allowing me to shoot a faster, flatter arrow, develop more kinetic energy and hunt much bigger game safely and ethically.

Editor Bowhunting World Magazine: Mike Strandlund: Here’s an interesting idea I’ve been fascinated with for a long time: Is there some way for a bowhunter to shoot a longer-draw-length bow without it affecting his shooting form, allowing him to shoot an arrow with more speed and energy but without sacrificing accuracy?  I think I may have found it, and while I am not given to superlatives, I believe it may be among the most important inventions in archery since the compound bow. It’s the Equalizer™ mechanical release by Goat Tuff Products.

The Equalizer fits comfortably in the palm of the hand with an In Line adjustable trigger that allows for the perfect alignment of the arm, wrist and Release. The plunger type trigger is activated with a smooth, natural movement of the finger. The Equalizer may also be shot as a back tension release. The release body is precision machined from billet aluminum with all internal parts of stainless steel for years of use.

GOAT TUFF Products also offers the popular line of Goat Tuff cleaning and gluing products for the professional and home arrow maker and the innovative Opti-Vane.