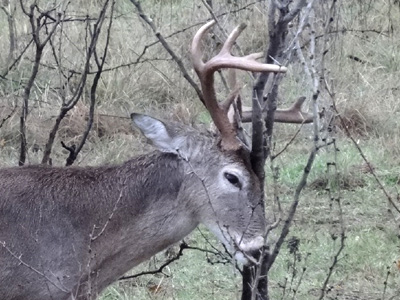 I got up half an hour early and started the coffee. Last night Rick had showed me pictures of the 8-point that had been hanging out with the 10-point I had seen. It was a fine, mature buck that didn’t fit into their game management scheme of things. But he fit into mine just fine, if he would just show up.

On the way to my Turtle the rain cranked up again, accented not so nicely by thunder and lightening. Because of the rain Rick drove me right to the blind.

Before daylight I saw a faint deer shape out in front of the blind about 50 yards. I glassed it as it walked along and made it out to be a buck, a big one with a big rack. The rain continued and the morning was uneventful.

We went back to camp and nuked the rest of the casserole. At 2:00 we were back out and the rain had slacked off. An hour later the 10-point I had seen yesterday made an appearance. 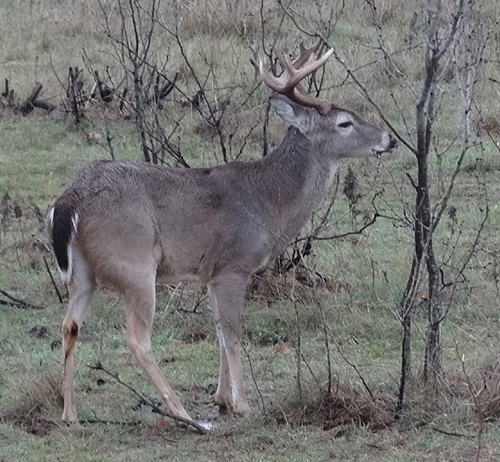 I didn’t know it yet, but he was on a mission. He wanted to be the first buck after the rain to mark the two sapling trees out in front of me. He got right to it. 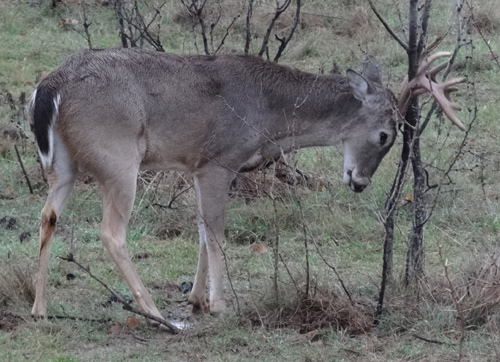 Below are the Thumbnails to the Photo Gallery of this buck yanking and raking the two sappling trees to mark them with his scent.

After he made his mark, so to speak, the 10-point meandered off. Later on I saw another big buck and a group of wild hogs. The closest they got on their route through my area was 60-80 yards so I didn’t have the opportunity to take a shot.

When Rick drove in to pick me up we loaded my stuff in his pickup and returned to Rick’s trailor. We closed things up and drove to Rick’s home. On the way we stopped a Chili’s in Decatur and they set the words record for slow service. The food was not so hot either.

But our bowhunt had been eventful, exciting and I definitely had fun.