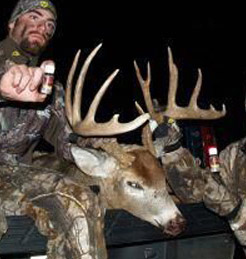 I have received several emails regarding the second rut and I suspect there may be others who may be asking these same questions. I want to start by recapping a bit from a previous article ‘The Truth About Deer Scents’. Whitetail does go through what is called the estrous cycle. This cycle differs slightly from the menstrual cycle which some other mammals go through, in that does do not shed the lining (endometrium) of the uterus.

Indeer, the estrous cycle is dictated by the light-dark cycle, and the shortening of day light exposure in the fall triggers the onset of the Estrous Cycle in the wild. The estrous consists of four major components. (Proestrus, Estrus, Metestrus, and Diestrus.

During Proestrus their body matures several eggs and the endometrium starts developing. This is what we hunters call the ‘chase phase’. These does are not yet receptive to a males, but their bodies are starting to produce the pheromones that will soon advertise sexual readiness. The next step is Estrus. During this phase does will stand and breed with a male of their liking. It is during this phase that we see bucks tending does. This is called ‘mate guarding’ and bucks intend to monopolize a female be keeping her from mating with another male while she is in estrus.

During this time a buck may breed a doe multiple times, and may last 48 hours. Following this Metestrus begins, and the effects of the estrogen start to subside, as progesterone is secreted. Finally if no fawns were conceived Diestrus commences, and the endometrium is reabsorbed to be used in the next cycle which will begin approximately 21 days later. This cycle may run 5-7 times should the doe not breed. See http://www.youtube.com/watch?v=4iaNx-Y362E to see a video showing a doe in heat!

Classically, deer activity and the estrous cycle is described using the term peak but it can more easily be visualized as a bell shaped curve. With a few does first entering the cycle first and as the days progress more and more does coming into the cycle.

Here in Illinois, it seems that rutting activity was at its ‘peak’ sometime around November 9th this year. Which means that the second estrous cycle should start sometime around November 30th. For those of you that did not tag out or still have some season left and are losing hope because you missed the first Rut, do not despair. The second estrous cycle can actually be as productive or better than the first due to the presence of fewer cycling does in the area.

Bucks during this time can be frantic in their search for what may be the last of the cycling does. The use of fresh deer scent can be increasingly effective during this time, as there is less distraction from live receptive does. We have all watched a buck who is love sick on a specific doe, and nothing short of a miracle would pull him off her. During the second estrous even with the effects of increased hunting pressure, bucks will still think with the wrong organ. The use of a dragline with estrous scent is a great way to lure in a buck who is searching for one last romantic fling for the season. I recommend using a clean paper towel as the drag and attach it to a short cord and drag it to your stand with about a 1/4th of a bottle of 4-Play estrous on it. Once at your stand hang the string in a short tree so the white paper towel is about three feet off the ground. The combination of the smell of fresh estrous and the visual stimulus of the white paper towel is more than many bucks can resist. 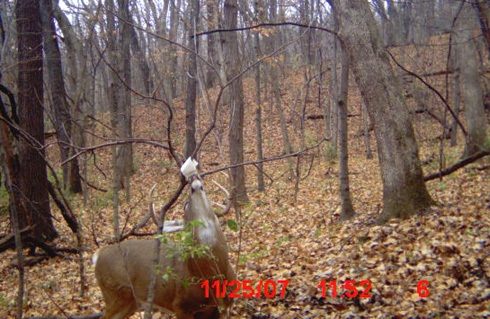 While I have no scientific evidence to support this, I feel that when a buck is looking for a doe they form what is called a ‘search pattern’. (kind of like when you are mushroom hunting and you close your eyes all you can see is mushrooms) The idea is this, a mental picture of what they are looking for is conceived in the brain and they key in on colors and other features that fit in that description. I believe the white paper towel especially in dense timber makes a buck think he has located the source of the estrous scent, and focuses his attention there and away from the awaiting hunter. 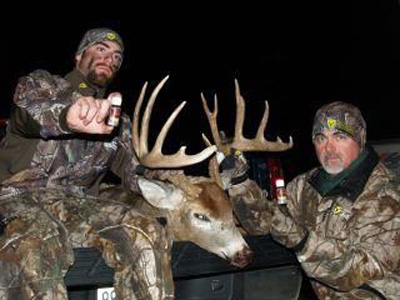 Hunting the second rut can be a great and exciting time to be in the woods. When used correctly the use of fresh doe estrous can greatly increase your success. Here at Timber Valley Fresh Scent we are continuing to bring does into heat every week until the middle of December. This way hunters form across the county can have the freshest deer scent possible all season long.

Thanks for your time,
Cavan Sullivan
TVFS Owner