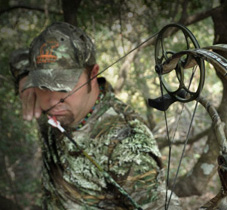 Leupold®, America’s Optics Authority®, announces that current partner and endorsee Brian “Pig Man” Quaca along with his outdoor television series, “Pig Man: The Series,” has been chosen as a top-five nominee in three separate categories of the 2011 Sportsman Choice Awards presented by the Sportsman Channel.

As Season 2 of Leupold’s “Pig Man: The Series” draws to a close, Pig Man and Leupold have much to celebrate over the first 24 months of their partnership together. During Season 1, Pig Man was named Sportsman Channel Host of the Year and the show received a Bronze Telly Award for outstanding outdoor television production. Earlier this year, it was announced that “Pig Man: The Series” would be awarded a Silver Telly in its sophomore season. A Silver Telly is the most highly sought after award in all of outdoor television. Matched with Leupold &Stevens, Inc., the newly anointed NAGSW Optics Manufacturer of the Year as his title sponsor, Pig Man continues to set the standard for outdoor entertainment.

“That’s the beautiful thing about this industry,” Quaca said. “I hunt because I love the sport, and I hunt on TV because my fans and viewers enjoy the entertainment—but you cannot do what I do under the level of scrutiny TV creates without an elite company such as Leupold providing me with the best optics on the planet and ultimately the opportunity to be successful in the public eye.”

Voting for the 2011 Sportsman Choice Awards is under way via Facebook and scheduled to end Sunday, December 11, 2011 at midnight. Leupold encourages voters to log onto http://www.facebook.com/sportsmanchannel and support Pig Man in his continued efforts to create quality outdoor programming.

Leupold & Stevens, Inc. is a Charter Supporter of the Hunting and Shooting Sports Heritage Foundation. For more go to:  Leupold