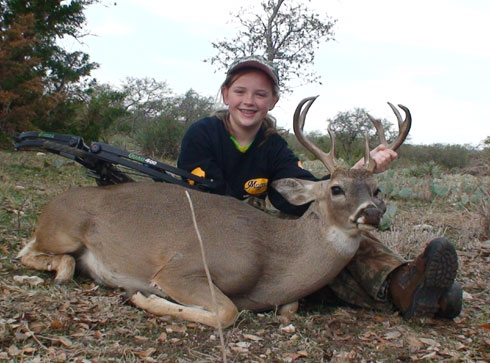 Lynzy Weaver with her best whitetail ever.

First things first, I’m writing this article from an interview with my lil sister Lynzy Lou about her Whitetail hunt in Brady Texas. She came up with the ‘My Barnett’ title but the Barnett is ‘Our’ crossbow. Actually it is 51 percent mine and 49 percent hers, just saying! Wait until she sees that in print!

In mid November while I was off duck hunting my Mom, Dad, and lil sister snuck out to west Texas to try and put my sister on a whitetail with ‘My’ Barnett crossbow. I still can’t believe they snuck off on me like that! By the way let me mention that while I was duck hunting I was using ‘My’ pair of Pro Ears ear muffs. They are a MUST for all shooting types!

Brady Texas is a seven hour drive from the house and Lynzy said the back seat of my Dad’s truck starts to get uncomfortable after six hours. Luckily the anticipation of the hunt kept her excitement level up which made the ride not so bad. I know my sister and I bet she was playing dress-up dolls on her iPad and listening to her crazy music the entire trip. She had no idea how uncomfortable the back seat was. I just confirmed that with my Mom, plus she was singing the whole way. Glad I wasn’t there to hear that. Her singing gets uncomfortable after about 2 minutes.

They made it to the camp at 11pm and my Dad’s friend Scrounger took them out to the ground blind. Scrounger is not much of a morning person so Dad and Lynzy would be on their own for the morning hunts. My Mom usually only hunts during the afternoon because she is one of those clean freaks. I mean that in a good way. She always gets up and cleans the camp, straightens things up and plans the meals. She’s a genuine Betty Crocker and Susie Homemaker all rolled into one! Dad and Scrounger put all the things in the ground blind during the night to make the morning walk in a bit lighter.

The alarm went off at 5am with Lynzy jumping right out of bed, ready to go. I must admit that my lil sister does come alive very fast in the morning which means she also starts talking right away! After a Dead Down Wind shower and spray down, Dad and sis had coffee, hot chocolate and mom’s homemade chocolate chip cookies and banana bread for breakfast. I love dunking mom’s cookies in hot chocolate. After many years of practice sis and I know exactly how long to dunk the cookies to make the chocolate chips soft and gooey. Yumm! My sister won’t admit it but I know she took a pocket full of cookies to the blind!

Dad and sis settled in the blind well before sunrise. The wind was howling so Dad had to re-stake the bind. This was Lynzy’s first hunting trip to west Texas as she has always hunted the east Texas piney woods. Hunting is tough, to say the least in east Texas, so tough that on most outings you never even see a deer. I would have loved to see her face when day light arrived and Dad tapped her on the shoulder and pulled her over so she could see out the blind window. Lynzy said she thought she was dreaming because five deer were out in front of the blind at first light. She has never seen five deer in a day let alone all at once, at first light.

She told Dad to put the Barnett Quad 400 on the shooting sticks because she was ready to shoot the big doe. Dad told her to be patient and wait for a buck. Now you really need to know my sister to appreciate this; she said, “Daddy are you crazy?” I bet my Dad had to tie her to the chair. Lucky for him an eight point walked in while my sister’s was seriously evaluating his mental state. Dad was going to make her wait on a bigger buck but since my sister’s biggest deer to date was a spike he agreed to let her take a shot. I really think Dad couldn’t take the torture from sis any longer and at that point was ready to let her take anything.

Dad, with the video camera running, placed the Barnett on the shooting sticks. The buck was at 38 yards with rocks, cactus and cedar in the background. You could hear the two of them trying to communicate on the video and it’s hilarious.  Dad is giving her instructions while trying to run the camera and she is talking to him. He is supposed to wear hearing aids but doesn’t so Lynzy is talking to him but he’s not answering because he doesn’t hear her. I think if he doesn’t want to wear his hearing aids he should wear the Pro Ears. This way he can keep his ears warm and hear everything, including Lynzy.

The buck refused to come any closer and Dad is still not hearing her so she grabs his shirt to get his attention. He tells her to put the crosshairs on the shoulder crease and squeeze the trigger. Lynzy was staring so long at the buck through the scope that her eyes were watering. Tears were running down her cheeks and over the stock but she didn’t break her concentration. The Bolt and 125 grain broadhead slashed through the crease on the buck’s shoulder. Lynzy let out a “YES”!  They both watched as the buck struggled to make it to the cactus and cedar brush. Lynzy said, “I got that buck good!” Both celebrated and watched the video in slow motion to confirm an awesome shot and the celebration started all over again!

Lynzy was instantly ready to go after her buck but Dad made her wait 45 minutes just to make sure things went well. Dad always makes us wait at least 45 minutes before pursuing a stuck critter. After the wait Lynzy couldn’t wait to run to where the buck was standing when she shot and noticed blood right away. Dad could see the downed buck from that spot but didn’t tell my sister. He just kept the camera running while she was intent on blood trailing. The blood trail was huge but my sister does not have much experience at it so she was very slow and methodical, completely concentrating. She was so focused on the blood trail that she got to within five yards of the buck before she spotted it. When she did see the buck she exploded with excitement and instantly grabbed the bucks rack and started counting all eight points.

Way to make it happen Lynzy! She did an interview for the camera and was quick to say “My brother is going to mount this for me and I want an apple in its mouth!” That is going to be a tough mount but anything thing for my favorite sister! Oh wait, she is my only sister!

Lynzy helped Dad cape and quarter the buck then gathered up Mom, Scrounger and his family and headed to town for ice and lunch. Dad said the rainbow trout was awesome. Man, rainbow trout is one of my favorites! I still can’t believe they snuck off on me!

For making the best equipment available.

Post-Season Nutrition: How to increase nutrition during the post-rut recovery period.

Shopping for a Crossbow