by Roy Keefer
in Bowhunting Posts
0 0
2 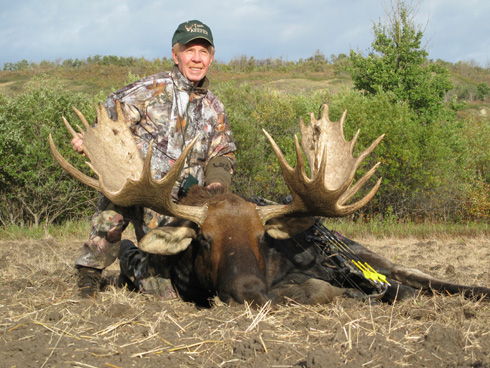 “Man that thing is big,” I thought as I looked up at the moose that stood mere yards away from me. That experience took place many years ago on a Wyoming elk hunt; I didn’t realize that I would later become obsessed with the idea of taking all three of the North American subspecies of the moose family. Several years later I hunted and killed an Alaska-Yukon moose and followed that with a Shiras in Utah. If I could be lucky again and take a Canada I would have the moose slam.

Fortunately I have made a lot of hunting friends through the years and I called upon them for some advice and guidance. I was given several leads and settled on Big Knife Outfitters in Alberta. The owner, Cody Cassidy, is a professional steer wrestler. He’s good, in fact, he finished 5th in the world at the 2010 National Finals Rodeo. His brother, Curtis, finished second. From talking to Cody, it sounded like he had a great area. Lots of trophy class moose, fairly easy walking terrain and the timing of the season was good. I had drawn an antelope tag in Wyoming and an elk tag in Arizona and this hunt would fit in after those hunts so I booked for late September.

The drive from our home in Las Vegas was long but my wife Shelby and I took turns and after driving for a day and a half we arrived at Cody’s home. He built cabins for his hunters and they are first class. Shelby and I had a cabin all to ourselves.

We drove around the evening before our hunt and saw a couple of moose, one was a young bull. That night we had an excellent meal prepared by Cody’s wife and got ready for our hunt. 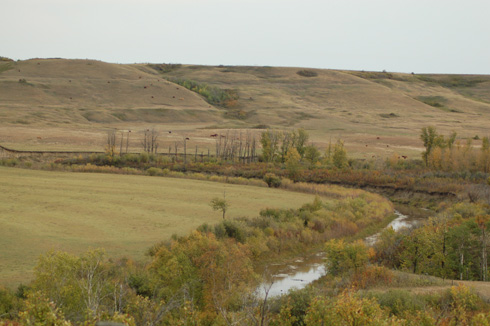 The next morning was cool and pleasant, not like the windy conditions we had experienced on our arrival. Cody had a couple of spots in mind so we drove to an overlook of a valley that was split by the Big Knife River. The river bottom is farmed and we could see fresh cut canola fields divided by thick stands of timber. An ideal spot for moose; water, food and cover.

It didn’t take long before we saw a herd of moose consisting of a small bull and some cows. We glassed them for a while and I looked off to our left and saw more moose. The horns of one shown brightly in the morning sun. Cody looked at them and said, “Let’s go, that’s a nice one.”

The moose were over a mile away so in order to get into position we drove part of the way and then dropped off the hilltop to begin a stalk. Our plan was to walk along a ditch out of sight of the moose until we got to a small knoll where they were feeding. The walk was easy, the wind was right and everything went as planned until we got to the knoll. By the time we arrived, the moose had finished eating and were leaving.

Thinking quickly, Cody cupped his hands and made a bull moose call. The cow, her calf and one small bull continued their exit but the larger bull moved toward us to fend off the intruding stranger. A bull moose stands about six feet at the shoulder so they are pretty imposing when they are up close and personal. He made his way through the thick brush and headed straight at me as I tried to find a shooting hole.

I moved to my left and saw a place where I hoped an arrow would clear the brush. When he was at 20 yards I shot and hit him in the lungs. He quickly moved off and stopped again broadside at 41 yards. I reloaded another arrow and released it. The arrow hit near the first. He managed to travel another 20 yards and stopped. He staggered and fell to his knees. It was over. The entire hunt had taken only two hours.

A bull moose is massive in size and their horns are equally impressive. My moose was bigger than anything I’d ever taken. I had the moose officially scored and it measured 181 5/8” gross and 173 6/8” net. The Pope & Young Club minimum score for a Canada moose is 135”.

It had been quite a hunt. We met some great people, saw some beautiful country, Shelby had videoed the hunt and I had taken a record book animal. It doesn’t get any better than that.