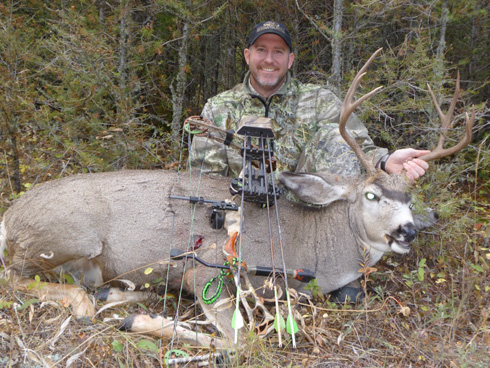 This time spot and stalked worked like it should. Thanks to stealth and HECS.

When you hear about spot and stalk mule deer hunts you hear about far more failed stalks than successful ones. My experience has been the same. Chasing mule deer bucks can be a humbling time that draws people back year after year. It is like a roller coaster ride that is full of ups and downs. What is it about matching wits with a muley buck that keeps us coming back for more?

This fall I headed to Montana with a deer and elk tag in my pocket. This would be the first time I have hunted Montana but have heard enough stories to know this was going to be a great hunt. I had only been in my hunting area for 30 minutes when I located a good buck. We hadn’t even reached our camp yet so I slipped out of the truck to get my bow out of the horse trailer.

Once I had my bow and arrow I snuck off the road with the truck and trailer hiding my movements. The buck’s rack was the only thing visible when I peeked around the corner of the trailer and I really felt I had a chance at him. He was a big 4×2 with kickers coming off the forked side.

I slid across the road and had a little roll separating me and the buck. When I reached the little tree I had marked I knew I was close. I nocked the arrow and peeked up over the little roll. He had moved up the hill a ways so I had to figure out the range. Somehow that buck knew I was there and bounded off over a little ridge. I knew he didn’t go far so I stayed after him.

As I approached the top of the little ridge I got down low so I could peek over and find him. There he was. My range finder was still packed in the truck so I estimated the yardage at 60 yards. I practice all summer long out to 80 yards so I was confident I could make the shot. I drew back, picked my spot behind the shoulder and let the Victory VAP fly. Strike one. He was 70 yards. The arrow went right under his belly.

One hour into our hunting area and I had already taken a shot at a good buck. I spotted another buck feeding only a half mile down the road. ‘This is great’ I thought, two good bucks within a half mile of each other.

I snuck out into the grass to try and close the distance but got busted as I drew back. As the deer trotted to my right I tried to move and cut them off. No such luck so the next several days we spent chasing elk and focusing on filling my elk tag.

I filled my elk tag on the seventh day of the hunt so it was time to focus on deer again. While heading down the road to a spot we wanted to hunt we saw a buck and two does cross the road ahead of us. They were in a good spot for a stalk so we parked the truck and got a game plan together. The wind was right.

A rancher had his cattle grazing nearby that could make this a tough stalk. Taking the utmost of care with every little step it seemed like hours had gone by for me to pick my way thru the trees and get into position for a shot. I peeked around a tree to see if I could spot this buck and he was standing there looking up the hill at the cattle that were milling around. He had no clue I was there. I needed to cover another 60-70 yards so I decided to pull my boots off and go the rest of the way in my socks.

I kept an eye on the buck as I made every little move. I couldn’t see the does and that had me a little concerned. My range finder said I was only 30 yards from the buck. This was it. I nocked an arrow, drew and slowly stepped around the tree I had been using as a blocker. The two does came up from behind the buck and looked my way. All three were looking my direction but couldn’t figure out what I was. The HECS suit had blocked my electromagnetic field that is a dead giveaway for all of us.

I held my HHA single pin behind the shoulder, got a solid anchor and touched off the shot. The VAP disappeared right where my pin was and the buck took off up the hill. He stopped after 40 yards and started to wobble. My legs were shaking and bent over and put my hands on my knees. I let a breath, gathered myself and stood up only to notice the buck had moved off. No problem I knew he was hit hard and wouldn’t go far.

I walked over and found my arrow a few feet from where the buck was standing. I was smiling from ear to ear as I started to head up to where I had last seen him when I looked over to where I had shot from. No way! The buck was laying only 20 yards from where I had just shot. He must have lost his legs and stumbled down the hill. That was the shortest track job I have ever had.

He was a decent 4×5 and I was happy. All my tags were now filled. My first trip to Montana has been a good one. As I looked closer at the buck I realized that this was the second buck I had put a stalk on the first evening I was here. I can’t believe I was able to get a second chance at this guy.

The thing to remember on spot and stalk hunts is that it is a marathon and not a sprint. Patience is a must. Taking your time to move slowly and make sure you’re not about to step on a stick while keeping an eye out for movement or colors will increase your chances.

Wearing a HECS suit will also increase your chances. The HECS suit blocks the EMF that all living creatures give off. Game animals will pick this up and will either bolt, or become much more skittish and aware, therefore more difficult to get close to. Wearing HECS will give you the edge and that is always important when hunting.

Being confident in your shooting abilities helps increase your success rate as well. With spot and stalk you could find yourself with some long shots. If you haven’t practiced at longer ranges you won’t be able to make an ethical shot when nerves and excitement come into play. Another plus is your equipment. I shoot Alpine Archery’s F1 Fireball and Victory VAP arrows because I can count on them to get the job done.

With a successful spot and stalk done I am already looking forward to the next one. The feeling of accomplishment answered my question of why we put ourselves thru this style of hunting that you have more failure than you do success.