Tater Takes Up The Trail

by Robert Hoague
in Bowhunting Blog, Deer
0 0
A A
5 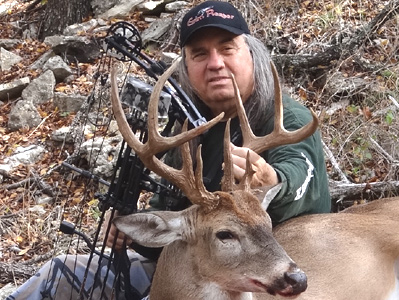 Billy Don let Tater out of the pickup. Tater loves to track and he was so excited he was trembling all over. We walked over to where the shot was made and Tater took off with Billy Don in tow, but way to the left of the way the buck had run. Then Tater returned and made a tight circle. And he hit the trail.

Billy Don had him on a leash and Tater pulled on it as he followed the buck’s trail. Eighty yards out we were at the edge of the deep gulch that cuts through my property. Josh saw my arrow on the ground. I picked it up and there was plenty of blood on half of it.

Tater stopped a few yards ahead of us and Billy Don unhooked the leash. Tater made a tight circle. And pealed off into the gulch.

Ten yards down the incline he slammed on the brakes. Josh could see him through the trees … and called out, “Tater is standing on top of your buck!”

We were all stoked. We were prepared for the worst but Double Brow Tine had gone only 120 yards. I wanted everybody to be in the pictures so we got busy with the picture taking.

In the last picture (above) you can see a mark above his shoulder, that is where my first shot was. Hitting the tripod took the umph out of my arrow. The cut is healed up and never slowed him down. In fact, those gouges and scars on his hip, face and neck hurt him more.

Double Brow Tine’s teeth were rounded and worn down. The biologist aged him at 8 years old and past his prime. To me, Double Brow Tine is a true trophy of a lifetime.

My Alpine Fireball is a super hunting bow. Bob Proctor did it right with this fine bow. It is consistently accurate, shot after shot. During the turkey season I set the bow down to 58 pounds and it still has plenty of power and shoot very flat. So I left it at that poundage for deer season too. The Fireball is quiet, in fact it is absolutely the quietest bow I have ever shot. This is a great bow.

Appropriately enough, I used Whitetail Special with a 2-inch cut and it put the buck down in 120 yards. Grim Reapers shoots and groups like my field points and that makes it easy to practice.  Grim Reaper broadheads have proved to be tough and accurate for me on wild hogs, deer, wild turkey and bears. I like these broadheads a lot.

For the deer hunt I am using the Mojave binocs from Leupold. They are the 10 x 50 model. I like the 10 power because it’s the biggest size I can hand hold. The field of view in these fine binoculars is clear, edge to edge. They work great in the thick woods too.

I have 3 different SpyPoint trail cameras. They were a big asset to this particular hunt. I moved them around and located Double Brow Tine and learned where he was and what time. SpyPoint lets me know what is coming to my hunting areas. And even more importantly, what is coming during daylight hours.

At the ATA Show in January I learned that all living beings constantly produce electromagnetic EMR energy waves. When you are excited you generate more and this energy spike can be picked up by animals and tip them off to your presence, because scientific research proves that game animals can sense changes in their EMR environment. HECS clothing blocks 90% of your EMR. So I ordered a set. It appears to be helping out.

My food plot was Rack Maker. The mix has legumes and alfalfa and my past experience with it alfalfa keeps growing in cold weather and deer are particularly drawn to it after heavy frosts hit. I prefer small plots 30 or 40 yards long and 15 yards wide. Does that work? Let me answer like this, 400 yards down hill from me is 300 acres of winter wheat or oats (depending on what the farmers plant in a given year). At night there are plenty of deer in their big fields. But during the day  they are in my little plot.

My carbon arrows were the V-Force from Victory Arrows. They shoot true and are tough. Their fletching is the Opti Vane from Goat Tuff Products. This vane is perfect for bowhunting. My arrow rest is the Whisperflite Fall Away rest from Alpine Archery. It is accurate and gives flawless arrow flight shot after shot. The Bowquiver is the 5 arrow model from Alpine Archery that can be removed from the bow in the stand, if preferred. The Peep is the Whisper Peep and it has vibration dampening material that makes this quiet bow even quieter. The bowsight is a Python from Cobra Archery. It was easy to sight in and its rheostat light makes the fiber optics show right up, even in a blind — that’s so dark inside a deer or hog or wild turkey can’t see you in it. My food plot was Rack Maker by Heartland Wildlife Institute. It has legumes and alfalfa in it and in my experience with it alfalfa keeps growing in cold weather and deer are drawn to it.

Every time, the last thing before leaving for the hunt I took a shower and used ATSKO Sport Wash to get totally scent free. It does the job. Beside the HECS pull over shirt and pants I wore black Cargo pants (with plenty of pockets) and a Long Sleeve T-shirt, both of which I bought at Wal-Mart. Plus I used a black face mask that I made. When it got cold I stayed warm and comfortable with the R4 fleece jacket from Patagonia as well as their expedition weight Capalene pant and turtleneck. Last year I got tired of getting cold and throwing away my money on cold weather wear that claimed it was warm but was NOT. Patagonia is the real deal. And my black Alpine Archery and Grim Reaper Broadheads cap topped it off.

Carbon Express Adds The Hot Pursuit 250 To The Mayhem Line

Time For The Point