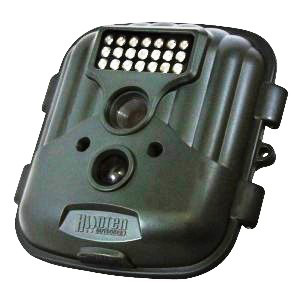 Now that we know what the technical claims are for this camera, let’s talk about what we found it can really do. Top to bottom, this little camera was a rugged, excellent, “worth every penny you will spend on it” camera. For the average guy looking to get as many cameras as he can afford in today’s economy, this is the choice!

The 21 LED lights worked better than advertised far past the range listed. I will be honest, based on the MSRP of the camera I placed these mighty little cameras in a couple of places that I was not too worried about missing a 400 inch bull. Well, not only did one of these cameras get photos of the biggest bull we had on camera this year, but they were pictures outside of the flash and PIR advertised range. I still cannot believe how good this great little camera worked! Overall, the flash system on this model far exceeded our expectations.

The PIR sensor worked better than advertised as well. The specifications on the camera listed the PIR range at 60 feet. We had numerous photos where the subject triggered the camera at 80 feet and more. The GSC35-20IR does not have the ability to change the PIR sensitivity, so you do have to make sure that you have a clear field of view. As advertised, we would rate the sensor system in the GSC35-20IR as excellent.

The trigger speed was good. The specifications did not list a response time, however, we did not have many photos that were not full frame with the entire subject in the photo. We also had multiple subjects that were caught more than once in burst mode. The burst mode on this camera allows the user to program up to 4 photos per trigger. The camera was placed at a 90 degree angle to the location we figured it would be triggered from, so this was a pleasant surprise on animals that did not stop to water but were walking through.

We found the recovery time to be average for a camera at this level, with very few fourth photos in the burst mode being empty photos. Recovery time ranged from 5 seconds in the day to 15 seconds at night. For the money, we were pleasantly surprised with the abilities of this camera in this area.

Beyond the burst mode, this Hunten model allows for manual setting of delay times between photos of 10 seconds, 30 seconds, 1 minute or 2 minutes. We set the camera on the 10 second delay mode, and found that the camera, both day and normally at night, did recover within that time frame to continue to shoot the same subject as well. (PIC 5 – A “second” shot of a bull walking past a water hole, taken 10 seconds after he first triggered the camera)

The photo quality was very good for a 2MP camera. Each picture had plenty of color and clarity. We liked the night pictures and low light pictures. The Hunten cameras light sensor was the best that we found, triggering the IR flash earlier in low light conditions than any other camera. This provided for the highest quality dusk and dawn transition photos that we captured. Dusk and dawn are when most animals move from feeding and watering areas to bedding areas, and the transition time photos from the Hunten cameras were excellent. Each picture is date and time stamped, with moon phase.

The GSC35-20IR camera has the ability to record AVI videos also which adds to the versatility of this amazing little camera. The solid photo quality of the still images carries over into the videos as well, and the video quality is good on this model.

The Hunten cameras operate on 4 C cell batteries. Battery life was average compared with the other cameras we reviewed. After 4 months and numerous pictures, the camera was ready for a new set of batteries. Of course, battery life is very dependent on the number of pictures the camera takes, and whether they are at day or at night.

The Hunten GSC35-20IR comes with pre-molded teeth as part of the camera housing that makes mounting this camera to any tree easy and secure. The camera holds its mounted position through wind and bear attacks! The housing is extremely durable as well. We had a number of bears chew on these cameras, and ended up with no more than a few small scratch marks on the housing. The bears thoroughly abused them, and the cameras stood up to every test the bears put them through.

The Hunten cameras also can also be purchased with a rechargeable battery pack and solar charger. While setup and positioning with these extras takes more time and effort and a clear view of the sky, it sure was nice to not have to worry about purchasing batteries in the units we tested the solar charging system on. The battery packs maintained full charge and worked perfectly. We did not test the solar charger and external battery pack in bear country for obvious reason.

Overall, we would highly recommend this unit to anyone looking for a very affordable camera. If you are a hunter with big camera needs and a small camera budget, this camera has your name written all over it. For its price, the durability and quality are second to none!

For more go to: Hunten Outdoors