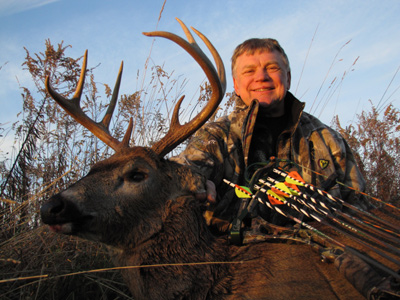 Brent and I pulled our stands out of Danger Bay this morning and I hunted a new stand that we’d set on a bay that was crowded with heavy cover. After 2 hours of sitting, the wind shifted and now it was blowing directly into the predicted arrival route of the deer I hoped to arrow. Rather than screw up the site I decided to leave and wait for a favorable wind.

This morning Donn hunted the 6-way Cherry tree again on my farm. He had to leave after the AM hunt so the golden tree would be available this afternoon. I didn’t arrive there until 3 PM and had only 2 ½ hours to hunt as I had to leave in the morning. I walked up the clover road and climbed into the stand. 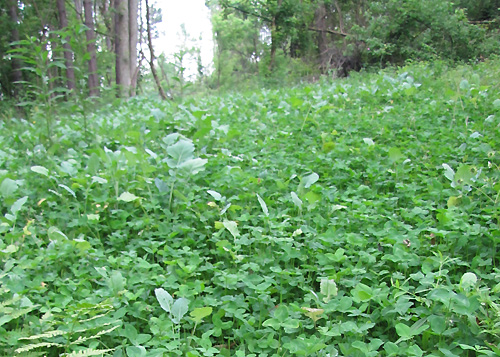 That was a few minutes before it began to spit snow. It came up in a heartbeat. The wind gusted to 25 mph and at one point I decided to sit rather than stand. I was considering climbing to the ground when the snow squall blew out and the sun came out.

I did a three-sixty scan.

Way off, along the lake 400 yards away, a mega buck was strolling my way. As luck would have it he crossed the dam and detoured my way taking a green logging trail that would take him directly behind me. His route would empty out right at my stand. My assessment of his head gear put him as a 150 class buck. I think we had a shot of this buck a few weeks ago as he cruised past the six way stand. Everything he had was heavy, long and tall.

My heart rate began to rise when he walked directly down wind. He was at a lower elevation than me and the steady wind caused my scent vector to ribbon out above his head. If he just keeps moving he will cross my scent trail and I’ll be golden.

Nothing ever works out as planned. I’d bet this buck had walked along his route dozens of times before. The beaver dam is a natural connector between the two thickets that border the lake, plus my food plot is on this side.

Well, this buck decided that an arm sized tree along the trail was calling his name. Didn’t he stop directly down wind and spend at least 6 minutes ripping this tree apart. There are thousands of tree on my farm but this one was in exactly the right location to ruin my chances. At the six minute mark the wind slowed down and he began to lick his nose. I saw this as a bad thing for Wade and it was. Eventually, he casually reversed directions and retraced his steps back to the dam; He was unalarmed and unhurried but knew something was dangerous up by the 6-way tree. That’s how he got that impressive rack.

I sat down and considered that I may not score this week. I’d be leaving within an hour. My Ohio season wasn’t looking so good as far as a buck in freezer wrap was concerned.

Fifteen minutes passed. I hadn’t looked back toward the dam since Mr. Big left. Then just under my left arm pit I noticed something moving. I glanced down and saw antlers between the trunks of the six-way Cherry. I stood and gazed down at a nice 8-point angling out toward the intersection of the two clover logging roads.

I drew my bow and watched the Swhacker come to rest in front of my riser. The twenty pin fell in behind his last rib — as the angle was a steep quartering.

The impact was exactly at the prescribed point and the arrow buried up to within 6-inches of the fletch. An inexperienced bowhunter would have said the impact point was a little far back. Truth is I was shooting at a point where the far right front leg meets the body. The impact point needed to be far back for the broadhead to end up in the boiler room between the front legs of the buck. The Swhacker used the long trocar tip to penetrate at the steep angled hide. Next bone chisel blades separated the hide and just inside the deer the 2-inch wide virgin blades swung open and traveled a total of 24 inches forward into the buck’s chest.

I was amazed that the buck hardly reacted at all. He made a small jump and walked about 18 yards and stopped. Next he tipped over like a foam target in a wind storm. He didn’t even wiggle after he flopped.

I texted Brent Henderson and he came over to take pictures and help get the buck out. 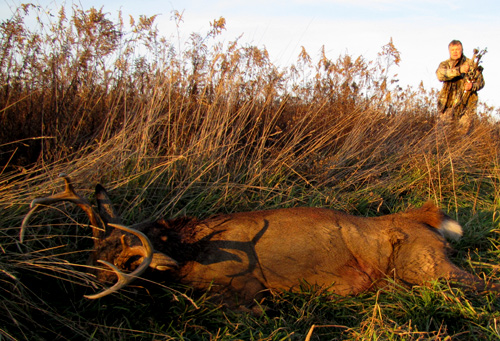 My last day turned out well after all. Ohio is a winner.

A lot of mechanicals perform poorly on steep quartering shots. Some broadheads perform so poorly that it may be irresponsible to take a steep quartering shot. The Swhacker mechanical proved to be the best broadhead I’ve ever tested on steep angle performance. The other critical factor is “Total Tissue Cut.” A very telling set of scientific testing was performed with ballistic gelatin last spring. If your goal is short blood trails you’ll want to see this authentic bit of broadhead science. It will surprise you. www.bowtube.com/media/1317/head_failure/

I want to bring something to your attention that surprised me. The buck I waylaid at the Six-Way Tree had been a real competitor in the local buck pool on my farm. After dropping him, I checked out the buck’s swollen neck. His neck was gored repeatedly by the tines of another buck or maybe multiple bucks. This buck was an aggressive breeder who may not have been the largest buck on my farm but was surely a real scrapper. His recent battles left his neck bloody and gored. 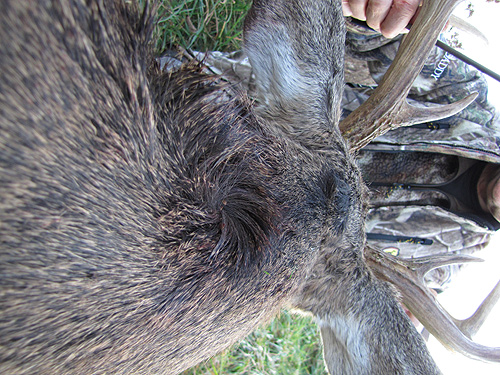 Also — I have been taking bowhunters to Clendening Lake for over ten years. Now, due to my promotion of the area, the cabins are all rented from early October to the end of November. The result has been a definite down-turn on the quality of bucks and number of deer on Clendening Lake. I recommend that newcomers investigate Egypt Valley and Jockey Hollow Wildlife Areas for quality deer hunts. There is over 15,000 acres of public land there to hunt and it gets low pressure in bow season. I’ve seen B&C bucks on both. The adjoining lakes of Piedmont and Tappan also have lots of public land and lodging available. Just Google a bit and you’ll locate some other options, but don’t overlook Ohio.