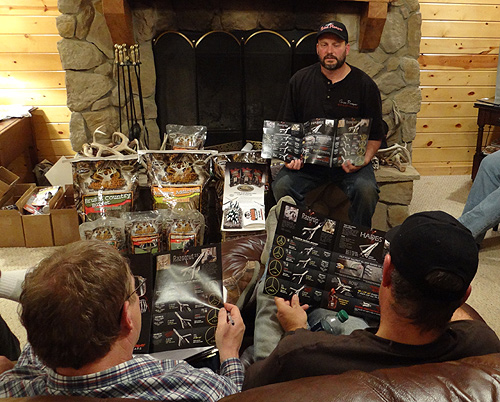 The History of Grim Reaper Broadheads:
Grim Reaper broadheads began in 2000 when Jay Leichty introduced his patented new broadhead, the Grim Reaper Razortip. Jay began advertising in the bowhunting magazines, on the internet and on Tom Nelson’s Bowhunter Magazine’s American Archer TV show, as well as exhibiting at hunting shows. Today, in 2011, Grim Reaper is a leading broadhead company with dealers in every states and many countries.

Jay wanted a mechanical with a sharper front end. Jay developed the Trocrazor Tip with razors in the Trocar Tip. He was the first to do this.

And Jay did not like O-rings and the Grim Reaper’s broadheads do not have O-rings.

The first broadhead was the Razortip. Named because it had a razor on the tip. A significant design factor was that the tip of the broadhead was further out in front of the blades than other mechanicals. Jay designed each Grim Reaper blade to open independently from the others. The 3 mini razors cut and cut a slit for the blades to cut into. It increases penetration and opens a cut channel in front of the broadhead. Jay’s unique spring system inside allows the blades to open easier.

After the success of the Razortip Jay turned his attention to his next broadheaed invention, the Razorcut. It is the cut on contact version with a razor sharp tip in the front of the broadhead.

Not limiting himself to mechanicals, Jay invented the Hades 3-blade broadhead that has its back blade edges sharpened also. It further cuts the wound channel if the arrow is pulled out.

Introduced last year, the Whitetail Special, a 2-inch cut broadhead was one of the sales leaders for 2011. And Jay showed us his new broadhead, the X-Bolt crossbow broadhead. It addresses the main issue that many mechanicals have when shot from a crossboy, the blades open when shot. The X-Bolt has a stiffer, stronger spring to keep the blades from opening when the bolt is shot.

All Grim Reaper Broadeheads are Made in the USA.

At this year’s Ryan Outdoors Writers Camp Jay Leichty went over the Grim Reaper broadhead line for all the writers. Jay also showed us the packaging and broadheads that are licensed to Matthews and available to all Matthews retailers, world wide.

Click on the Grim Reaper video below to play it. Bruce Ryan shows us the 2012 Grim Reaper Broadline line.

The Grim Reaper web site has  information and pictures and comments from Grim Reaper users (www.grimreaperbroadheads.com) and has a Dealer Finder where you can find a dealer near you.