by Robert Hoague
in Bowhunting Blog
0 0
A A
3 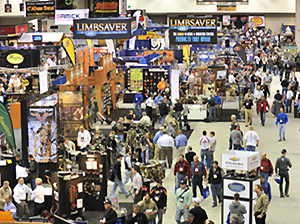 NEW ULM, Minn. – The Archery Trade Association chose Jan.10-12, Tuesday through Thursday, as the dates for the 2012 Trade Show in Columbus, Ohio.

Jay McAninch, ATA CEO/President said he expects dealers are embracing the Tuesday-Thursday format in 2012. Recalling the 2010 ATA Trade Show in Columbus, which had a Wednesday-Friday run, McAninch said: “We got past those concerns about weekday vs. weekend shows the last time we were there. Many of our dealers and Show attendees actually preferred the weekdays. And those who didn’t proclaim it as a preference were largely indifferent, showing no favor for the weekend over weekdays or vice versa.”

Tom Wilcox of Wilcox Bait & Tackle in Newport News, Virginia, agreed. After the 2010 Show Wilcox said: “I really don’t care if the Show is on weekdays or Thursday through Saturday. I work six or seven days a week anyway, so it doesn’t matter which days I’m at the Show.”

The Jan. 10-12, 2012, schedule also allows exhibitors attending both the ATA and SHOT shows time to make the transition between events. The SHOT Show will be Jan. 17-20 at the Sands Convention Center. McAninch estimates more than 100 of the approximately 500 ATA exhibitors also display at the SHOT Show.

Booth selection for the 2012 Show starts in April and information will be mailed to all Trade Show exhibitor contacts in early March. Exhibitors with preference points will be assigned a date and time to select their space, which will be done by telephone. New companies and returning companies without preference points will select booth space once the call schedule is complete.

In addition, early-bird registration opens June 1 for dealers, retailers, sales reps and other show attendees. Nearly 300 ATA members capitalized on early-bird incentives in June 2010 by signing up during the first week of registration.
For more information about the 2012 Show, contact Maria Lewis at (866) 266-2776, ext. 2, or e-mail, marialewis@archerytrade.org .

About the ATA Trade Show: The ATA Trade Show is the archery and bowhunting industry’s largest and most inclusive show. The member-driven event promotes commerce within the industry, and is owned and operated by the ATA. As the only industry show that funds archery and bowhunting growth, the ATA invests in state agencies to coordinate introductory archery initiatives such as National Archery in the Schools Program and the After School Archery Program. To date, the ATA has invested and pledged nearly $2 million to bring archery shooting facilities and introductory programs to U.S. cities. Meanwhile, the ATA also fights for bowhunting rights in courtrooms across the country. The show is closed to the public and is an order-writing event.

Not Your Average Treestand