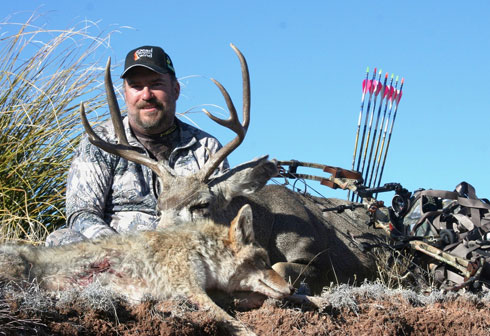 Author with his 2012 New Mexico Mule Deer, “Scrapper”, and the first coyote that came to Scrapper’s last brawl.

As I walked over to the northeast edge of the draw and spotted the does already across the canyon. They had covered a lot of ground really quick. I started glassing and to my surprise the buck was in the group. My first thought was “He is already dead, he just doesn’t know it yet”.

He had covered probably 300 yards and did not appear to even be thinking about slowing down. One of the does in the group decided that she was not leaving without a drink of water and turned straight around and headed back to the water hole. Another followed her, then a couple more until finally, they all started coming back toward me. Obviously, they had not seen, smelled or sensed anything.

About half way back down into the bottom of the draw, old scrapper started hounding one of the does. She was having none of it and ran off from him at full speed towards me. He started to follow her but then it all hit him! He made it to the bottom of the draw and started staggering. It was just about over. He stumbled, went down on his front end and I dropped my binoculars to get a clear look at his location. Just as I did, I saw something else move. What the heck was that?

I threw my binoculars back up just in time to see a coyote run in at full speed and stop about 10 yards out in front of the buck. Just as I realized what it was, I noticed more movement to his left side. I turned to see three more coming in from the north. Looking back, I assume they either heard him wheezing or smelled the blood and they were thinking they were going to get a fresh meal. The scrapper pushed himself back up, ready for one last battle. I took off like a shot intent on making sure these mangy varmints did not get to eat some venison before I did.

I ran all the way to the bottom of the draw and crossed it. I was about 50 yards from where I had last seen him. Then it hit me – they did not know I was there either. I took the blood soaked Gold Tip Arrow that I had shot the buck with, quietly nocked it again, hooked my release and started stalking through the brush. The last time I had seen the deer as I ran off of the hill he had dropped but that did not mean he was not still moving, which would have those coyotes intent on him and not paying any attention to me.

I got within 25 yards of the buck and could see his head and horns through the brush but could not hear or see anything else. I waited about 10 seconds and then saw movement coming out of the brush. I drew and coyote one stepped out of the brush at 10 yards. I dropped the top pin of my Spot-Hogg sight on him real low and released. The arrow ripped through him, he hit the bottom of the draw and headed out of there like he was on fire. About 70 yards up the draw he dropped and slid to a stop. No more deer steaks for him.

I knew there were still three more coyotes in that brush so I quietly grabbed another arrow out of my quiver and nocked it. Just as I hooked the release and drew, coyote two stepped out at about 30 yards and arrow two did its job. I nocked a third arrow and a few second later coyote three stepped out at around 20 yards. Even after two shots he never knew what hit him. He yelped and headed off into the brush. That yelp was enough for coyote four to forget all about that easy meal he thought he was about to have and head for the high country. The last time I saw him his tail was whirling and he was not looking back. I imagine he ran a long ways before he stopped.

It all happened so fast I am not sure I even took a breath in between. Three arrows, four animals and all in less than five minutes. The scrapper buck had been so amped up on adrenaline after his fight that he went a long ways after I hit him, getting a final adrenaline shot as the coyotes came in for what they thought was going to be their kill and a venison bonanza. They had no idea.

I went to get the truck and called Ryan who was more than happy to help remove the deer and track down some dead coyotes. The first coyote went down in clear sight and was easy to recover. Coyote two went into a huge thick brush pile in the bottom of the draw and we both decided that crawling through that snake infested brush to recover a coyote was not worth it. Coyote three was trailed to a fence line that was also a property boundary and the trail had to end there. Smiles all around though because any dead coyote means a lower fawn and calf mortality rate though, recovered or not!

We finally got a chance to take a good look at the old buck. I had no idea what a warrior he was. His left eye had a huge cut below it, which we would soon see was from a fight where a horn had gone through the skin and had also completely destroyed his eye. Both ears were ripped to shreds and looked like party favors at their ends. His neck was covered with blood from four puncture holes that had gone all the way through his neck muscles and had bruised his esophagus. He was skinned up from head to hind end and had a branch from an oak tree stuck through his skin and buried over three inches deep into his left shoulder. He was a walking trauma case yet was still king of those 23 does and let everyone around him know it! From a management standpoint, his horn size and structure were not what you wanted breeding 23 does, but there was no doubt that this guy had a 200” plus attitude and heart!

I got “Scrapper” skinned, quartered and packed up for the trip home, the whole time still amazed by the series of events that had transpired after the shot. I had never seen anything like that in any of my days hunting. Was it just a freak occurrence? Was it a lucky day? Or was it a series of natural events that all came together because of the fact that I was completely undetected due to the Tremendous Trio of the HECS StealthScreen, the Dead Down Wind lineup of scent elimination products and the Sitka Gear, Gore Optifade Concealment Open Country line of clothing?

After 35 years of doing this, I know for a fact which one it really is. I just wonder how long it will take everyone else to figure it out.

I can’t wait until this weekend and opening day of the archery Javelina hunt. The Tremendous Trio is making every hunt a new kind of adventure and I really like all of the things I see now that I have missed for the past 35 years!

God Bless each of you in your days in the wonderful outdoors He so graciously gave to us. May He keep your arrows flying straight and your freezers full!

Don’t have a HECS yet? Go to www.hecsllc.com and order your suit today. As a special bonus for readers of this article, enter promotion code PRO 0 and receive FREE shipping on your order.