Appreciate and Learn from the Ones that ‘Got Away’ 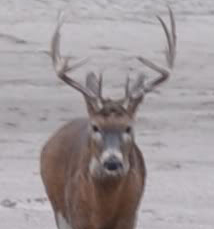 As hunters, I don’t believe we ever stop learning! Over the years, you should have collected enough experiences about the deer in your area, and mistakes that you’ve made and use this information to plan your next ambush. In November of 2008, I had the opportunity to hunt in Pike County, Illinois. Pike County is known as the “trophy buck capital of the world”. Don’t get me wrong, there are big, beautiful deer in other parts of the world but Pike County is recognized for its seeming consistency with an abundance of large antlered deer. 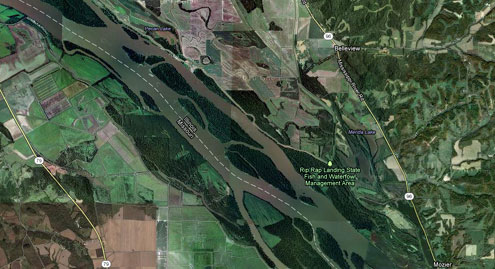 I had a once of a lifetime hunt on an island on the Mississippi River. The idea of the hunt was to be situated in a fixed tree stand, inside of a patch of cottonwood trees, the morning prior to the opening day of gun season in Missouri. Missouri; which happened to be located a hop, skip and a jump across the river from my tree stand location on my private little island. Once shooting commenced from the other state at day break the deer would begin fleeing the area and swim across the river onto my island, hopefully crossing below my path, and then he would succumb to his demise under the wrath of my bow and arrow.

My camera man, Shawn and I were dropped off on the island by a duck boat which resembled a tank; afloat on the dark black waters of the Mississippi River. I set my tree stand at the front of the boat and made my way back toward the glowing orange propane heater, where a brown water dog had sat, tail wagging as I came closer to him. I set my stuff down and stood up to look outside the boat, and saw another glow, the jagged, fiery line of sunrise peeking out from the deep purple horizon. As the floating tank glided along the mighty river I could feel how really cold it was and it felt great. Also, you know when you get so excited about something that you get this feeling of anticipation and even chills? Well, this was it!

I pulled my camera out and snapped a picture so that I would never forget this sunrise. The boat came upon a sandbar and made a thump that jostled me off balance for a bit and the duck guide, who happened to be the owner of this 800 acre island, jumped out and let me hand my tree stand to him. He watched as I looked down into the water and hesitates, and he said, “it’s not that deep, do you have waterproof boots?”

“All the way up to my knees”, I said; so with this said, I jumped in and anticipated more of a dramatic landing than it was. With my cameraman and gear on shore we began walking to my designated tree stand. I wasn’t sure how far we had to walk across this sand bar but I have never hunted on an island before and what a contradiction of the senses this was for me. It was like walking on the beach at night in the middle of winter. It should have been warm and tropical out and I was thinking of summer things.

Approximately 300 yards later, we turned in to a wooded area, with cottonwood trees as round and wide and as tall as the redwoods of northern California. My stand was in an ideal location, as I was instructed that a 200” monster buck has been traveling through this area every day, and they had him on the game camera. Looking down at my feet, I stood in the middle of the biggest deer tracks I had ever seen in my life. 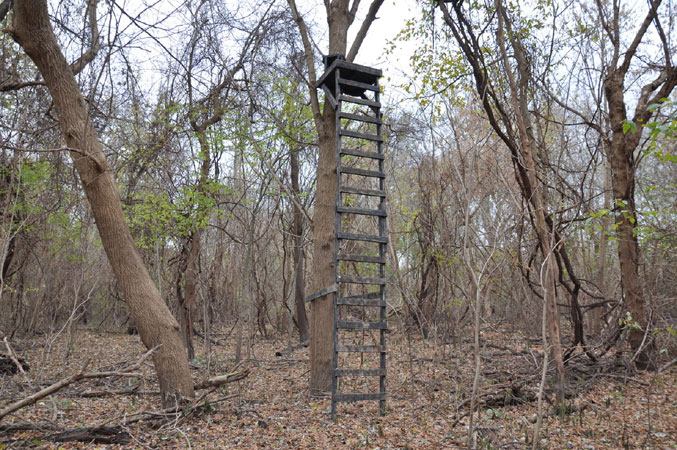 The stand was constructed of wood and chained to a large cottonwood tree. As I climbed, I counted the steps and guestimated that I was about 22 feet high. The wood seat was fairly comfortable and had plenty of room, a lowering rope, and hooks were available. I sat down, removed my quiver and placed an arrow on my bowstring and hung my bow next to me.

I watched Shawn use his climbing tree stand to get up in a tree across from me about the same height. He gracefully got about half way up and had to climb back down and back up again; he forgot to hook his back pack on the line. Finally, we were both settled in and ready. He was ready to film and I was ready to shoot.

As sunlight began to break through the haze of the night, the candlelit woods came to life and I heard the first shot of the morning. Gun season officially started in Missouri and I waited for herds of frightened deer to come running toward me. I imagined them swimming across the river, I wondered if they’d be wet when they got here, would I be shooting a wet deer? Okay, I am waiting for one deer, I don’t usually name deer, but his name was Mr. Big. Two hours into the day, it started snowing. I pulled out my ‘extreme’ weather kit from my back pack, which consists of a neck gaiter to keep my neck warm and keep the wind from creeping in. I put on another fleece hat over my camouflaged baseball cap, and slipped a pair of camo wool mittens over my gloves. Now, I am toasty.

Two hours passed, and a small 8 point buck came by. This wasn’t the frightened fleeing deer I was anticipating. He casually moseyed on by and laid down behind some brush, now I could not see much of him except for patches of brown. I don’t know how long he lay there, but I didn’t see him after that, I don’t know exactly when he got up and walked away, but he wasn’t there anymore. The flurries lasted almost the entire day. At around 2pm we gave each other the nod, and came down to stretch our legs, pee and explore the island. It was an enchanting sight, scattered rows of humungous cottonwood trees, separated by a sand bar and deer tracks everywhere winding in and all around us. We found two other similar tree stands on the island and decided to head back.

I wanted to take a picture by the water and as we moved toward the shoreline, we noticed a huge shooter buck with a short drop tine coming toward us. We were upwind of him, so he came right to us, oblivious of what was ahead of him. Shawn and I dove into the ground and hunkered down in the tall grass and this buck walked by us at 30 yards, broadside, offering me a shot… if I only had my bow! I left my bow up in my tree stand. I never imagined we’d see anything walking around the island, making a bunch of noise. There was nothing left to do but take a picture of him. This picture would remind me never to leave my tree stand without my bow for any reason! What a lesson to learn.

And that is deer hunting. The picture turned out beautiful, I was able to count his points and I keep a picture of this 12 point with a little drop tine on my cell phone to show people the buck what I could have had. We did see more deer the rest of the day but that was my only opportunity to shoot a big Pike County buck on this particular hunting trip. The 200 incher never came by but it was a memorable and enjoyable hunt. At any time, I can think of this hunt and still see feel the soft sand under each step of my hunting boots and I can still feel the brutal cold wind against my cheek. I’ll never forget the long day in the stand with my buddy across from me and the snow flurries between us. I remember when Shawn called me hardcore and he one of the toughest hunter I have ever known.

If a hunter can appreciate the little details and not get lost in the kill, then hunting becomes a time for reflecting, relaxing and slowing life down from the hectic lifestyles that many of us lead. I can look at the intricacy of my surroundings, be amazed and excited that I was able to elude the deer that did come toward me.

Seeing any deer under my tree stand gets the heart station pumping even when I don’t draw my bow back. I have also had the pleasure of seeing other game while deer hunting as I am very certain many hunters can relate. Isn’t it Murphy’s Law when you are not turkey hunting, you see turkeys. When you are not pheasant hunting, they float by and cackle as if they are taunting you. I bowhunted on a piece of state property that also penned hundreds of pheasants, the ones they drive around and release at various state parks for the pheasant hunters. All day long in my tree stand, everywhere I looked there was a pheasant – but of course, I was bowhunting for deer.

On one hunt, a scraggly ‘yote walked by and curled up at the base of another tree 15 yards away from me. I drew back on him but he decided to get tucked in even further and hid so well behind some brush I did not see him in my sights so I let down. And, while I was experiencing the other particulars of this hunt, he slipped away from me without a sound.

This hunting story doesn’t have a picture of a ‘kill’ to go with it. You will never find me inside of a fence to narrow my opportunity to shoot a trophy animal; in fact, you may find me many times without the animal I intended to kill. I’ve been hunting for many years and I cannot come close to winning any contest if I would enter them, though I am too humbled to do so.

I am constantly trying to balance my juggling act. I pursue my passion for the outdoors, the challenge and exhilaration of the hunt, the freedom to ride my motorcycle, the confidence of being able to fix things and build things with my own hands, taking care of the elderly who have no family to help them in any way. I know my plate is more than full; all of what I do is intertwined around those other parts of my life. It is the middle ground that I am seeking, the perfect symmetry of love, career, family and self.

And for the best in Sport Optics, Photo & Video Accessories be sure and go to: Vanguard World