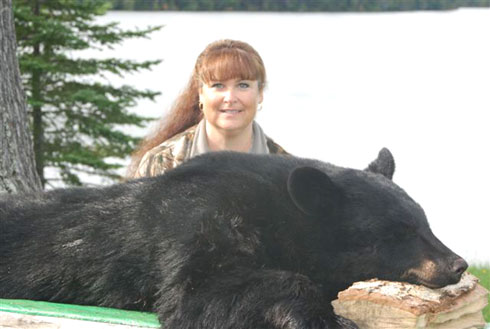 Author with her bear.

We arrived at the site early; I was excited and had a real gut feeling that today could be the day. The blind was a brushed in dead fall with thick pines all around me and was very small and tight.

After getting all my gear in place I drew my bow several times to see how I could make my play. The blind was so tight the only way that I could draw was to stand up. I was only 17 yards from the bait and I knew quickly that this was not an ideal set up for a bow hunter. On the other hand where the tree had snapped it made a natural rest for the barrel of my rifle and I could sit all the way up against the side of the blind and not move at all the only thing I would have to do if a bear came in would be raise the stock of my rifle from my leg to my shoulder, I was completely concealed. As much as it killed me I laid down my bow and positioned myself and “the precious” for the afternoon.

The woods were alive with birds and little red squirrel and I kept seeing what I thought was the snout of a bear about 30 yards in the woods to my left. Turned out it was only the shadow on a tree.

Around 5:00 I saw movement to my left, I did not move anything but my eyes and I could make out a looming figure headed toward the bait. He was very cautious and moved slowly and quietly. He scanned every thing and was in no hurry to come closer. He circled behind the bait to keep the wind in his favor and made a very slow approach to the bait. At that time I was scanning the area as well to make sure this was not a sow with cubs.

He was alone and finally his appetite got the better of him. He was a beautiful bear with a thick shiny coat and I hoped he would give me an opportunity for a shot. He finally walked around a huge pine to my left and made his way to the bait. At the last minute he turned and went behind the barrel and just stood there looking back the way he came. This gave me the chance I needed to slowly raise the rifle to my shoulder.

I am a very calm hunter and don’t’ get buck fever or bear fever until after the shot, then I am a shaking mess, but this was different. I noticed that the scope on my rifle seemed to be out of focus which has never happened before. Well, it was not out of focus it was me breathing like I had just ran the 100 yard dash. I had to calm myself down. The bear was not alarmed which was good, I don’t know how he kept from hearing my ragged breathing but he didn’t. I closed my eyes and took a few deep breaths which worked. I focused my scope crosshairs right behind his shoulder and waited for him to give me a clean broadside shot. He finally decided he would investigate the bait and that was the opportunity I had been waiting for. I slowly squeezed the trigger and the bullet hit true, the boar took off the way he came in and I listened intently and thought I heard him crash. It was 5:16pm.

Now let’s talk about bear fever. It’s a good thing I was on the ground because I would have shaken myself out of a tree. I waited about 20 minutes and thought I would call Ryan on the radio. I dug the radio out of my pack and turned it on. Me being the ham that I am I pressed the button and quietly said “Big timber this is dark forest, do you copy”. What a wit I am, I knew Ryan would get a kick out of that one……there was no answer. So again I called in a little louder tone: Big Timber this is dark forest, do you copy?” Again, no answer. Ok, maybe me being a goof ball was not working so I waited a few minutes. “Ryan this is Lynne can you hear me? Got your ears on? Nothing, no answer at all. The problem was I was so far back in the deep dark forest there was no reception, no signal, no nothing.

So I sat there a few minutes and decided to walk out to where Ryan had parked when we walked in. There was a huge field there and I knew that would be my only chance for a signal. When I arrived in the field I crossed my fingers and pressed the button “Ryan this is Lynne do you copy” and I waited. A few seconds went by and I heard the radio click. “Dave is that you”? came Ryan’s voice over the radio. “Ryan its Lynne I have a bear down”. Several more seconds go by and the radio cracks. Dave is that you came Ryan’s voice again. All he was hearing was the radio crack on his end. I walked further out in the field where there were no trees and once again I pressed the button, “Ryan this is Lynne do you copy”. I knew that if worse come to worse and I could not get him on the radio he would be back after dark and we would track the bear then but there is nothing like having daylight to track and recover.

After several seconds went by I had resigned myself to go back to the blind and wait when I heard a voice on the radio “Lynne is that you”? Yes! Yes! It’s me I shot a bear! Do you copy!? “You shot a bear!? I’ll be there in a about 15 to 20 minutes! Finally, thank you Lord! We would get to make the recovery while we still had light.

Twenty minutes had gone by when I heard Ryan walking through the woods. He walked to the bait and asked me where the bear was when I shot, I pointed to the area from the blind Ryan looked and there was blood on the barrel. I motioned to him which way the bear headed and we were off tracking the bear. We would find blood I would stay at that site and Ryan would move forward to the next sign and I would move up. Jim and I track this way when we hunt together, that way you don’t mess up the trail. We went about 100 yards and there he was. What an awesome bear and he had a little white check on his chest.

Since the woods were so thick it was impossible to drag him out on the stretcher they use, we tried but it just didn’t work. Ryan carried him part of the way on his shoulders and then we both dragged him until we got him to the clearing. We then put him on the stretcher and finally got him to the truck. I think he weighed about 600lbs by the time we arrived at the truck. We were tagged and loaded by 7:15 with a little day light to spare. What an adventure! We would check the bear in at the check station in the morning and then we would skin him and quarter him up for the ride back to North Carolina.

Jim and I had taken some Wildlife Research Center Bear Lure with us.The Owners and guides usually ask every one to not use any lures they may have brought that they did not want foreign odors in the woods that may spook the bear. But with the huge mast crop and bear sightings lower than usual they asked if they could use the WRC bear lure at a few bait sites and give it a try, of course we said yes. And it paid off.

Friday Dave Carportelli scored on a huge bear weighing over 400lbs and they had used the WRC Bear Lure at his site. They were all impressed. No other bear were harvest on Friday or Saturday. Unfortunately Jim did not harvest a bear this year but it was not for a lack of seeing bears, moose, fisher cats and whitetail deer. There was a running joke that he was sitting in a zoo everyday. The reason he did not harvest a bear was all the bear that came within range were sow’s with cubs.

Friday and Saturday I had the pleasure of riding with Ryan, Jen and Darren and getting to bait sites and run the radio and command central from the truck for the other guides and hunters while Ryan, Jen and Darren were picking up hunters and searching for bears that had been shot. It was a blast.

This is our second Maine Bear hunt and we have to say by far the best. We look forward to going back and hunting with Jen and Ryan at Camp Wapiti again. There were several couples in camp as the wives had come along just to enjoy the scenic beauty. They enjoyed the quiet solitude of the lake, shopped in Patten Maine which is about 30 minutes away and enjoyed their time in the pristine North Maine woods. Camp Wapiti has something for everyone, hunting, fishing, boating, canoeing, hiking and the list goes on. If you have been searching for an awesome bear or moose hunt and want to go with experienced guides that will do everything in their power to put you on great black bear and moose, look no further than Camp Wapiti. You roll into camp as a stranger but you leave as part of the family. Jim and I can’t wait to go back and hunt with them again.

For more information you can go to www.teamfrady.com. Go to our preferred outfitter page and there is a direct link to their sight. You can also call Ryan and Jennifer at 207-528-2485 and their website is www.campwapiti.com. You will also be able to find them at the Harrisburg Sportsman Show in 2012.

Ripped Off - My Alaskan Hunt