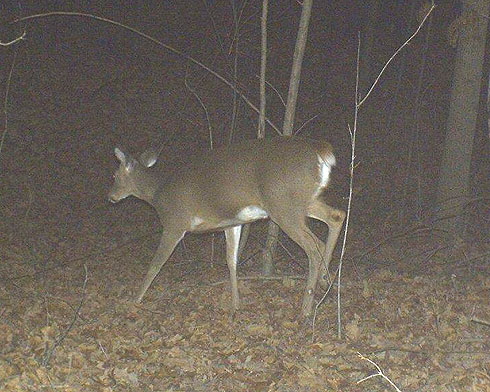 HELLO, MOLLY! This is one of dozens of trail cam photos I've collected of the bob-tailed doe we call Molly. She's a survivor of at least half a dozen Hoosier hunting seasons and spends most of her time hanging out on our farm. How she lost her tail is anyone's guess.

Sponsored by:  Dead Down Wind & The Archery Hall of Fame

ASK ANY DEER HUNTER and it’s likely he or she’ll be able to describe some special, unforgettable deer that they’ve glimpsed while hunting or scouting. Often it’s a breathtaking big-racked buck. Sometimes it’s the rare sighting of a piebald or albino animal. At other times there’s something unnatural about the deer that sets it apart from the rest of the herd … a noticeable limp, a missing leg or hoof, a droopy ear, deformed antler, an obvious scar, etc.

Me? I’ve pretty much seen all kinds over the past 50+ years. And if asked to recall the one deer that stands out above all others, I’ll simply say, “You need to meet Molly, the bob-tailed whitetail doe that’s hung around my southern Indiana farm for the past half dozen years.”

I met the old gal the same summer we bought our Cedar Hills Farm. She already was a mature doe with a frisky button buck at her side. The fact she was missing most of her tail made her instantly identifiable to Janet and me as we hiked the hardwood ridges or drove our Rhino side-by-side along the shaded trails, marking sites for food plots and tree stands. Unusually calm and curious, she seldom ran. Most often she merely stood at a safe distance, eyeing us with cervine curiosity. Still, she was far from tame. When hunting season rolled around, I quickly discovered this sharp-eyed doe sounded the same snorting, foot-stamping “Intruder Alert” so common with watchful woodland matriarchs.

She frequently tripped shutters on my trail cameras and walked under my stand during bow season. Honestly, the thought of arrowing her never entered my mind. I did shoot her repeatedly with my Nikon SLR and Sony HD HandyCam. And the following year I got even more video footage and still photos of the bob-tailed doe we named Molly.

Since those early days, Molly sightings have become commonplace. Although she’ll disappear for weeks at a time, and I’ll fret that maybe she’s been pulled down by coyotes or shot after venturing onto a neighboring farm, so far she always shows up again.

I’ve often pointed her out to visiting guests, neighbors and friends with permission to hunt my property (who keep an eye on her and promise not to intentionally kill her during hunting season), and other hunting buddies who’ve heard about Molly. She even put in an appearance for Tom Nelson and the Wolf Creek cameramen who visit me yearly to tape my segments for Tom’s “Dead Down Wind American Archer” TV show on The Outdoor Channel.

Speaking of television, Molly has been spotlighted on Tom’s show for the past two broadcast seasons. And since she’s made it through the 2011 Hoosier hunting season, it’s likely a “Molly update” will be aired later this year. I have lots of new pics and tape to share and viewer response to Molly’s earlier segments have been overwhelmingly positive.

One highlight of 2011 was when our three youngest grandsons – Scotty (10), Tyler (8) and Andrew (6) – came down from northern Indiana to “hunt’ with grandpa. Molly showed up the very first morning we sat in a ground blind I’d erected along well-used deer trails leading to a back 40 food plot. Several other does and fawns were with Molly and the boys grew wide-eyed when she approached within 15 yards to check out the portable blind. Meanwhile, I captured some great video footage. I couldn’t have scripted a better morning’s hunt, even though no arrows were released.

AS IF HAVING MOLLY ON OUR FARM isn’t enough, I got really excited when checking trail cams after the rut and found photos of a young 8-point buck with – you guessed it – a bobbed tail just like Molly’s. We nicknamed him “Stubby,” and I promptly contacted longtime friend, Bowhunter magazine Conservation Editor, Dr. Dave Samuel.

“Is it possible,” I asked, “that having two bob-tailed whitetails on the same farm is something genetic?” “No way,” Dave told me. But when I pleaded for him to explain it, Dave admitted he couldn’t. So the mystery continues.

In discussing Molly and the short-tailed buck with hunting friends, I’ve heard a lot of possible explanations about her missing appendage. One Pennsylvania pal, who works on a deer farm, reported that sometimes does will nip at the tails of newborn fawns. The result can be shortened or missing tails. Hmmmm …

Whatever the cause, wild bob-tailed whitetails are few and far between. I feel truly blessed to have Molly and Stubby turn up on our farm. Their presence makes a special place Janet and I love even more special.