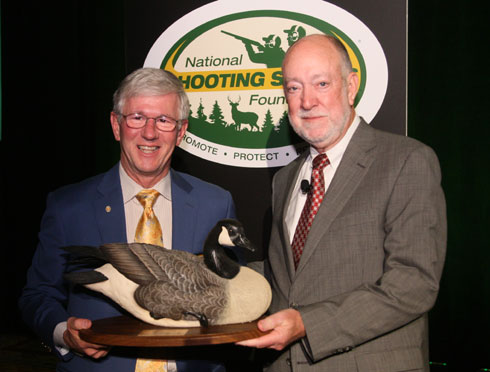 MidwayUSA's Larry and Brenda Potterfield receipt of the Ken Sedlecky Award at the National Shooting Sports Foundation's (NSSF) State of the Industry Dinner, which is the highest award given by the NSSF.

“The National Shooting Sports Foundation (NSSF) Ken Sedlecky Achievement Award is presented to individuals who have distinguished themselves by their long-term commitment to the success of our industry and by their support of our mission to promote, protect, and preserve hunting and the shooting sports,” said Steve Sanetti, President of the NSSF. “The award is made in recognition of the recipient’s extraordinary vision, leadership and personal commitment to our industry and the American tradition of safe and responsible enjoyment of our right to own and use firearms.”

Through their support of Key Conservation Groups, the National Rifle Association and youth shooting programs, Larry and Brenda Potterfield and MidwayUSA have been active participants in the shooting sports industry since the company opened their doors in the late 70s.

“Larry Potterfield was selected to be this year’s recipient due to his most generous, unselfish, and unparalleled support of many worthwhile organizations within our industry which share our goals,” said Sanetti. “He was chosen from a group of nominees proposed by a special committee of the National Shooting Sports Foundation, and we are extremely proud and honored to recognize his outstanding service to our industry by this award.”

“Ken Sedlecky devoted his entire life to the shooting sports by actively participating in competitive shooting as well as supporting both women and junior shooters,” said Larry Potterfield, Founder and CEO of MidwayUSA.

“It’s an honor to be associated with Ken and receive this award from the NSSF. We appreciate the support of our Customers that allows us to focus on supporting shooting programs in the US.”

About MidwayUSA MidwayUSA (http://www.midwayusa.com) is a family-owned catalog and internet retailer specializing in JUST ABOUT EVERYTHING? for Shooting, Reloading, Gunsmithing and Hunting.

Now celebrating their 35th Anniversary, Larry and Brenda Potterfield turned their passion for shooting sports into a career in 1977 by opening a small retail firearms store that would eventually become MidwayUSA. MidwayUSA is still owned by the Potterfield Family and Customer Satisfaction is still our Number One Goal. About The NSSF The NSSF is the trade association for the firearms industry. Its mission is to promote, protect and preserve hunting and the shooting sports. Formed in 1961, NSSF has a membership of more than 6,000 manufacturers, distributors, firearms retailers, shooting ranges, sportsmen’s organizations and publishers. For more information go to: MidwayUSA  or call 800-243-3220. For more information about the NSSF