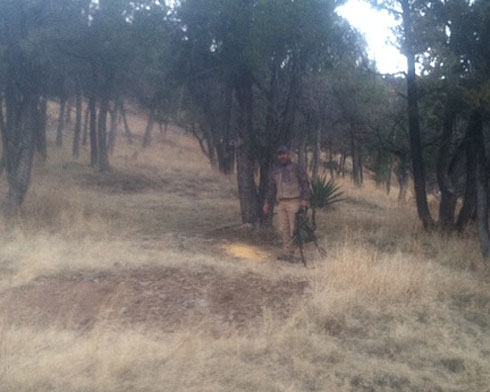 Todd putting out some grain at the turkey creek blind.

After another great breakfast we all headed out to our blinds. Three of the group were relocated to blinds on the other side of the mountain and had to leave a little earlier than usual. I was lucky and left at the usual time of 6:30 AM. As soon as the sun rose high enough in the sky to hit the ground on my side of the canyon the deer started moving. It was fun for most of the morning as nine deer pretty much stayed in site for almost two hours. There were four bucks this morning, the two spikes from yesterday and two fork horned bucks…..too small to shoot, but we’re getting closer!

By 10:00 all action had dried up so I ate an early lunch. Todd (my guide) called to check in at 12:00 as planned. I was going to move to another blind at noon if things didn’t look “promising” here, but I told him I was seeing more bucks and wanted to give it a little more time. As it turned out that was the wrong decision as I only had two of the smaller bucks return all day and neither of them stayed long!

Tomorrow I’ll try this same blind again until 11:00am. If things aren’t jumping I’ll move down the canyon a few miles to a blind they call “The Rub”. Supposedly there is a huge rub close by which makes Steve believe there is an exceptional buck in the area. We’ll see what happens and I’ll give you a report tomorrow.

On the plus side my friend Mark Turner had a decent six point come into the new blind he was sitting today. The buck came in twice, morning and afternoon, but didn’t give him a shot either time. Mark is going back to the same blind again tomorrow to see if the buck will give him a better chance.

All the other guys saw deer but they were all small bucks and does. Mark saw the only shooter today but that was an improvement on the first day so things are moving in the right direction. Hopefully I’ll have a trophy picture or two to share tomorrow.
Roy