by Rebecca Francis
in Bowhunting Posts
0 0
A A
11 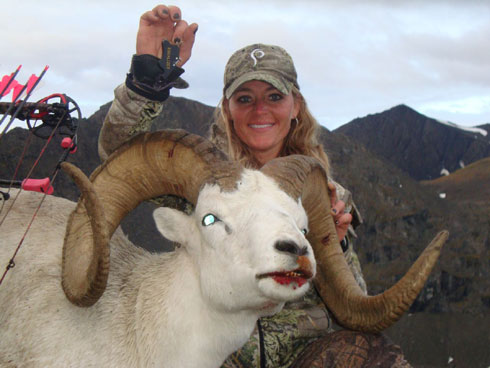 It seemed as if time were standing still as we waited for light to come. I watched each minute pass on my watch as we waited and waited, shivering and cold.

Finally as the light started to slowly sneak in we packed our backpacks so we could start hiking and warm up. We were all feeling discouraged, especially after the rain. Sterling commented that we most likely wouldn’t find it now. But we knew we had to try. Now that it was light we decided to split up and walk in an even line so we could see more area. Sterling and Henry decided to go higher. Lee and I worked our way through some cliffs then we split off and I went lower. Just then Sterling spotted the five rams that had been with my ram the night before. They were crossing the canyon below us, and the big ram was not with them. That was a good sign.

We had barely crested the very next ridge when Lee called out….There he is! I honestly did not believe him. I looked down the chute and couldn’t see anything. I figured he was just seeing snow and I thought he was just teasing me. He told me to come up a little higher and I would be able see him. I hiked a little higher thinking if that really was him, we were almost on top of him last night. We would have only had to make one more ridge and we would have found him. Or, we could have just as easily walked right past him in the dark, and lost him. In fact, if Lee and I hadn’t split up right then Lee wouldn’t have been able to see into the dip where the ram laid. Henry and Sterling couldn’t see him either. I was holding my breath as I worked my way a little higher.

I looked down and fell to my knees overcome with excitement. I couldn’t believe it…there he was, I could actually see him. It was almost as if the stars had all aligned. I had never felt so blessed. As I sat there waiting for the others to join me before we approached the ram, I thought back about all that happened leading up to this moment. We had gone through so many high’s and low’s. Thinking we had him, then we didn’t, then we did, then we didn’t. I didn’t think it could get any better.

As we worked our way down the chute to the ram we were getting more and more excited seeing the mass of his horns. Finally I was there. I picked up the ram and almost broke down from all the emotion. Just when I thought it couldn’t get any better, it did. None of us realized the caliber of sheep I had shot. I was looking at a trophy 42 1/2 inch ram. I held him in my hands and felt so thankful for this experience. Sterling called Bill on the satellite phone and woke him up so I could tell him the good news. I could hardly talk as I quickly explained all that had happened. Then it dawned on me that I had shot the ram on our 15th wedding anniversary. What an experience!

I just wanted to live in that moment. We had worked so hard to get there and then had everything work out just right. I was elated. We took hundreds of pictures and then caped him out. As we began boning the meat to pack out I was also excited to find that none of the meat had been ruined by the shot or the fall. My Trophy Taker, 100 grain Shuttle T broadhead made a perfect shot once again. The broadhead looked like it hadn’t even been touched. We were able to pack out every ounce of meat on that ram. I knew from experience that dall sheep meat is the best and most tender meat of all wild game. I couldn’t wait to get to Bill’s lodge and eat some sheep.

All four of us were packed to the brim with our gear and sheep. Sterling carried the cape, Henry and Lee carried the meat, and I proudly carried the head strapped to my pack. I couldn’t believe how heavy the horns were. I don’t know how those sheep carry those things around.

It took us awhile with our heavy loads but as we arrived back to camp our luck had run out. It began to rain again, but this time it was for real. We crawled in our tiny tents soaking wet, exhausted and thrilled all at the same time. As soon as we got settled, Lee pulled out a mountain house raspberry crumble dessert and we celebrated our best anniversary so far.

We ended up being weathered in our tents for a couple more days. I was very thankful I had hauled the extra weight of a book along. The tent seemed to get smaller and smaller each day we were trapped inside. When Bill was finally able to fly in safely and pick us up I knew this was unquestionably one of my most cherished hunts ever, and I was so thankful for the incredible people that accompanied me. It wouldn’t have been the same without any one of them. But the adventure wasn’t over, I drew out for a goat tag too.

The final score of my ram is 168 1/8 making it number three in Pope and Young however, I recently found out that my ram will not be accepted in Pope & Young because I used a Lumenok. I was pretty discouraged at first, with no one to blame but myself for not knowing. However, because I did use the pink Lumenok, the camera was able to pick up the shot from a distance. Without it, viewers would be unable to see the arrow. (Video will be available in the upcoming months on bowtube and will air on Eye Of The Hunter on versus in 2012.).

I truly believe that I would not have had this incredible opportunity without that the hard work and sacrifice of my outfitter Bill Stevenson. It is because of him that so many incredible sheep are taken from this area.

I can’t end this adventure without acknowledging some of the sponsors that helped make the success of this hunt possible.