Ripped Off – My Alaskan Hunt 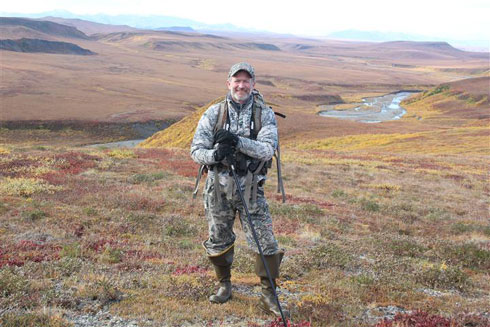 Beautiful terrain but the hunt? Not so much.

As I write this in late January, I am still licking my wounds from a truly disastrous hunting trip to Alaska. The hunt was supposed to center around climbing high and hunting Dall sheep but I would also buy a grizzly tag to both be prepared should a bear simply show up unannounced or, had things gone well, I could bear hunt after I had a ram on the ground. I hadn’t counted on the outfitter fibbing to me about how the hunt would go down. I never spent a day sheep hunting. Instead I was shuttled to two different low-country camps where I was told to bear hunt until “Things were right” to go chase rams. Amazingly, they never were.

Not much else I could do once out in Bush Alaska but follow instructions as I needed the outfitter to give me a supercub ride back to Anaktuvuk at some point so I could get the heck out of there. And so I grizzly hunted for nine days out of backpack-type camps where breakfast was a candy bar, lunch a PB&J and some gorp and supper a freeze-dried dinner and mug of hot chocolate. My guide? Let’s just say he had so many issues that after a month of bad attitude with the season’s previous clients the outfitter fired him the day I left base camp.

Thankfully, I love to hunt grizzly bears, so all was not lost. I guided some for both grizzly and brown bears when I lived in Alaska and love the country in which the mountain grizzly lives. It had been six years since I had been in the Alaskan mountains and I had forgotten how spectacular the Far North is in early fall. The tundra is a canvas of reds, blues, purples, oranges, yellows and greens, while the rivers and streams burble along with icy water as pure as any on earth. This year there was a huge blueberry crop, and I picked them as eagerly as a little schoolboy, all the while remembering how much my wife Cheryl and I enjoyed going blueberry picking together.

Blueberries also often hold the key to fall mountain grizzly hunting. In years of abundant berries the bears can be found gorging themselves on the ripe fruit. The hunt strategy is really very simple. You leave camp as early as you can get your guide going in the morning, climb to a high vantage point and glass until the guide says it is time to head back to camp. Unfortunately for me, my guide was an 8-to-5 kinda guy, when it got light about 5:00 a.m. and dark about 11:00 p.m. Since he knew I used to guide and could take care of myself, when it was “quitting time” and he packed his stuff he had no problem leaving me to keep glassing.

As you can imagine, we didn’t share a lot of conversation, which was OK for me. It wasn’t long before I found myself in a sort of Zen-like state, glassing for hours on end, taking short naps in the warm sun, eating a few berries, and reflecting back on my many years of Alaska grizzly hunting.

A mountain grizzly — which to me is arguably the most magnificent big game animal in all of North America — was actually the first Alaskan animal I ever killed. It was on my first Alaskan hunt back in the mid-1980’s when my outfitter, his wife, young son and I encountered the bear while riding horses out to a sheep camp. Before leaving from home I remember telling everyone that I would be thrilled if I could just see a grizzly, let alone get a crack at one. After shooting that bear Terry and Deb Overly sat me down beside it, then dipped their fingers in bear blood and painted a small cross on my forehead. I was no longer a cheechchako, I was a grizzly hunter!

Five years later I was an Alaskan resident and could not wait to get after big bears. And I did, hunting them from the rainforests of the Southeast panhandle north to the Brooks Range, from western Alaska to the Yukon border. At the time the law only allowed the killing of one grizzly or brown bear every four regulatory years, though there were a few units where a bear every year could be taken and that’s where I spent the bulk of my time. I hunted them with both rifle and bow. That, plus the guiding thing, helped me learn a lot about the magnificent Ursus arctos.

When people ask me to describe the big bears, I simply tell them they are Superman. For a football field they can run as fast as a racehorse and their physical strength is hard to describe so I’ll just say I believe a big brown bear could flip over an F-150 if it wanted to. They have a sense of smell that is as good, if not better, than any whitetail deer, pretty good eyesight and they can hear a pin drop a football field away on a still day. When you decide to hunt one, you best have your ducks in a row and certainly want to hit it in the right place the first time. I have had the unpleasant experience of rooting out wounded bears in thick cover on more than one occasion and am here to tell you it is not a game. I also keep hoping that soon the PTB (Powers That Be) will come to their senses and open some limited grizzly hunting around Yellowstone Park where the bears are thick and conflicts with humans numerous. If and when that happens I will be the first guy in line to try and obtain a tag.

When I finally climbed aboard the little Piper Caravan for the flight from the native village of Anaktuvuk back to Fairbanks, my spirits were not as deflated as they probably should have been. Don’t get me wrong, I hate getting ripped off on an expensive outfitted hunt just as much as the next guy. Who has that kind of time and money to waste? It’s just that this time I was able to spend a lot of time by myself in the Alaskan wilderness, remembering. Over the years I have killed a dozen big bears in the Far North and seen friends and clients shoot another dozen or so. On this hunt I saw some sows with cubs and a couple of small boars I would not have shot had I had the opportunity, along with lots of caribou and a handful of nice bull moose. On the very last morning a mature boar did appear, walking with a purpose across the open tundra a bit more than a mile distant. We tried to catch up to him but no dice. Looking back, that was probably a fitting way to end this nightmare.

This is the “Sport show season,” where many of you will meet and greet with outfitters and plan dream hunts to some faraway land. As you do, remember the old saying, Caveat emptor — let the buyer beware. Once you’re in camp with a nightmare like mine, sadly, it’s too late. And if you’re thinking about a Brooks Range hunt and want to know more about the guy who hosed me down, e-mail me here. Be glad to tell you all about it.

Appreciate and Learn from the Ones that 'Got Away'