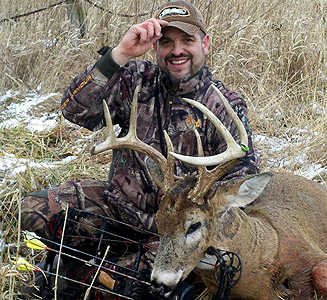 I got a text from Doug Crabtree Jr. today and he had just recovered a big Ohio 8-point buck. Doug saw this buck on his game camera and set up a Double Bull ground blind in the immediate area.

Yesterday the hunting was not weather friendly. It was 30 degrees with a 50 plus MPH wind. The wind chill was Zero. But Doug toughed it  out and in the late afternoon the wind let up. Soon after he saw the buck approaching.

When the 8-point stopped a few steps from the blind Doug saw his shot opportunity and he drew and took his shot. The buck, heart shot, bolted away and went down quickly.