The Science of Smell 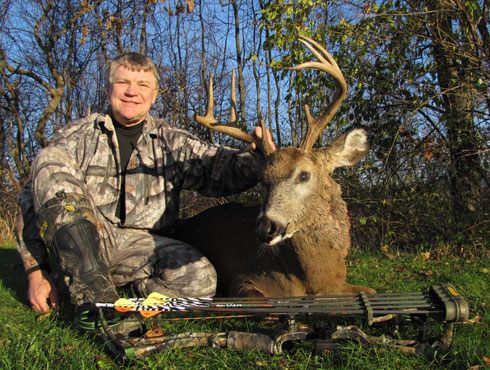 Detouring terrain plus scent suppression plus wind management enabled my Ohio buck to pose for a pic.

The wind is a whitetails best ally. In that they see with their nose, the wind is sort of a movie of upwind events and players. Whitetails are not often confused about the data they retrieve from the wind. If they have seen that movie before and it was M rated (man), they don’t stay around for another viewing. Forget the wind and you lose.

My background as a biologist has allowed me to look at scent suppression with an open mind. Rather than be influenced by marketing campaigns I’ve chosen a track of accepting only repeatable and provable science. For starters, let’s agree that a whitetail’s sense of smell is almost a product of science fiction. It is hard to imagine an organ capable of smelling (detecting) odors that is more than 1000 times more sensitive than our nose. After all, our noses still work quite well. What would 1000X more sensitive look like?

Spend some time in a treestand when the thermals are dropping and you’ll discover that a whitetail can pick you out of the wind at 40 or 60 or even 100 yards. That is after you thought you were scent free. Do you know what he smells? It is one of two things. Either he smells mouth bacteria that are human specific or he is detecting the off gassing of human specific bacteria as the bacterium consumes skin cells. The common denominator is smelly human specific bacteria.

The byproduct of the bacteria metabolizing in your mouth or on your skin is very, very identifiable. As a matter of fact it is not only specific to humans it is you. That is how a tracking dog can find a specific jailbreak criminal. Once imprinted with that mans unique smell he can sniff him out of a crowed stadium. The dog, or more importantly a deer, is following the microscopic “cookie trail” of shed skin cells. These skin cells constantly fall off our bodies in a virtual snowstorm. Billions are shed daily. They smell like you, and they smell like you for at least 24 hours after you leave.

This is why you shouldn’t walk on a deer trail in an area where you plan to hunt. He will eventually detect you and avoid the area if he deems it a risky scheme. You can’t be sloppy and expect to win when you’re confronting the best nose in the business.

How do you confront the human specific bacteria issue? It’s easier than you may think. First, you wash all of your clothes in a scent free detergent. I use Sport-Wash laundry detergent from Atsko because it is an engineered detergent and leaves no smelly residue on your clothes. Next, you bathe using Atsko’s Hair and Body soap. It is made with similar chemistry as the Sport-Wash. Now here is the twist…scrub like a mad man. Use a scratchy glove that you can get at “Bath and Beyond” or the dollar store. Tell the checkout girl it’s for your wife. You’ll feel like a girl but ignore it. Use it to remove the skin cells that are about to fall off your body. Scrub, Scrub, Scrub. You should look a little like a strawberry when you’re done.

Finally, before you leave the shower, turn off the water and spray down with N-O-DOR spray. Stand there for a full minute while it soaks in…now towel off. N-O-DOR is an oxidizer and uses a sophisticated anti-bacterial to knock down the human specific bacteria on your skin. I use it as a mouthwash, then I spit it out after brushing my teeth. That addresses the mouth bacteria. The topical treatment will hammer the remaining skin bacteria and give you 24 hours to be as scent free as humanly possible. That’s the story of scientific scent suppression in a few paragraphs. Put on your clean camo and hunt.

I’ve once filmed and worked in one of Alaska’s best brown bear camps on the Alaska Peninsula. AAA Alaska Outfitters is operated by Brent Jones and Roger Morris…now just Brent. Most whitetailers would not know this next fact. Brown bears have a nose that makes a whitetail seem like he needs a nasal decongestant. The big bears are just short of unreal with their ability to smell a human.

I’m telling you this because Roger, who is a master brown bear guide, doesn’t take a shower for 3-4 weeks while in camp guiding. Yet he guides hunters to within bow range of B&C bears. How can that be? Roger is a master at managing his wind vector. He stays down wind and sneaks right up to the mega bears. You can only do this when stalking an animal. If you are playing a “He comes to you” game, it gets tougher. However, it is still possible to a degree. If you learn this strategy you can outsmart most whitetails. Here is the key.

Deer are animals of habit. They travel on trails and come to certain locations daily to feed and bed. After patterning a deer, you can begin to manage your scent vector so that you are always down wind.

I recently did this on my farm in Ohio. The farm has a lot of contour, valleys and a large lake to work with as well as open pastureland. I noticed after some scouting that most deer were approaching my clover lane by either walking up the lane, through a gully coming out of the pasture or out of the swamp below the lake. I placed my treestand on the edge of a drop-off that overlooked the lake. The wind came out of the pasture and blew across the lake behind me. It was wind management 101.

The deer never swam across the lake so my scent, if there was any, was blowing where deer don’t go. I call this using detouring terrain. Terrain that causes a deer to detour. You can modify this technique and apply it to an ambush treestand as simple as setting up on the downwind side of a scrape you’re watching or downwind of a major trail intersection. I have the proof in freezer wrap.

So there you have it, scent management that works. For a real advantage, I suggest you use a combination of both. The only thing a whitetail can’t smell is nothing…so give him nothing to smell.

For the best in scent control go to: Atsko