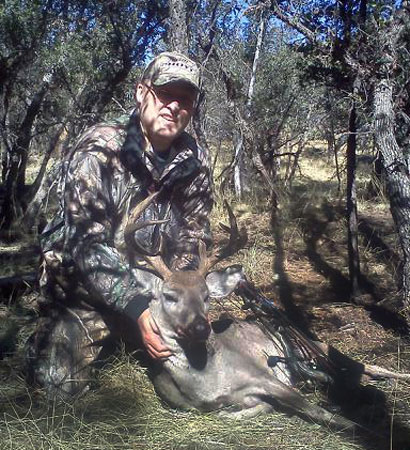 Chris Barry and the great buck he shot today.

Today was a tough day, after a restless night’s sleep. After spending almost all day yesterday looking for my deer it seemed hopeless but we had to try again.

Steve had me sit another blind in the morning because it was a new year and I have a second tag. Ross was going to put out his other hunter and then glass the canyon where we thought my buck went to look for birds or any other sign of where he might have gone. I saw a lot of does but no bucks and my mind was on the wounded buck all day anyway. Ross glassed for a couple hours to no avail. Tomorrow we’ll give it another hard search.

Mark was the only other hunter to see a shooter today. He was sitting my original blind (I shouldn’t have moved!) and had a great eight pointer come in. The way he described it, it could be the same one I saw from this blind last January. If so he’s a great one! To continue our string of bad luck however, Mark’s long bow limb hit the top of the blind when he shot and he didn’t like where the hit appeared to be. He got out of the blind after an hour and hiked back to the road for a ride back to camp. He didn’t want to push this deer. We decided I’d help him and the guides look for his buck in the morning and then we’d go give mine one last try. It will be another sleepless night tonight!

Mark and I spent the day hiking and looking for deer. We got a lot of exercise but not much else I’m afraid. After tracking Mark’s deer straight up hill for about 500 yards we found where it bedded for the first time. Judging from the blood trail it had never stopped from the time it was hit until it climbed right out of the canyon to the saddle which appears to be where it crossed into this canyon the morning before.

Judging by the limited amount of blood in the bed the buck either stayed there only a very short time or wasn’t bleeding badly or both! We took the trail another 100 yards or so and then lost it completely. While disappointed, at least Mark can be pretty sure the deer wasn’t wounded badly. Steve believes someone else will shoot this deer at the bait before the season is over.

My buck is a different story, hard as we looked we can find no sign of him. Today we checked the creek beds up and down the mountain on both sides of the canyon the bait is in thinking the deer might have headed to water. We also glassed all sides of the canyon and ridge looking for any sign of bird activity. Ross promised to keep glassing the area hoping that he’ll find a clue as to where the buck went but everyone agrees that the chance of finding that buck are very slim indeed.

Yesterday we were joined by a new hunter, Chris Barry, who won his hunt at the Pope & Young Convention in their annual raffle. Chris is starting off lucky, we’ll see if he can help change our luck before the week is over. No one saw a shooter buck today but two of us weren’t sitting blinds. We’ll be back at it in the morning and see if we can turn things around.

Day 9
This morning we got up to another fine breakfast. I have been remiss in not telling everyone just how great the food and accommodations are here at the “Dream Catcher”. Steve Ward uses this fine establishment as his headquarters for the late season archery hunts and I have to say that it is the finest camp situation I’ve ever had the pleasure of enjoying! It would be a great place to just vacation with your better half for a few days and build some “brownie points”.

Back to the hunt:
Mark and one other client were heading over the mountain to try some of the blinds that haven’t been used for a few days. I went back to the one I sat two days ago. Chris (our newcomer) was sitting the same blind for the third day as he has seen an average of 20 does a day and figures a big buck is bound to come by soon. Travis has been in the same blind for four days looking to get a shot at the big ten point they caught on a trail camera a week ago.

I had an interesting day with a steady stream of does and fawns coming and going. The action started at 7:40 and went almost non stop until after 12:00 when the first cow showed up! I’m starting to dislike cows almost as much as the deer do! As soon as the cows show the deer bust out and it’s “game over” until about 20 minutes after they leave. I tried running them off the other day but that doesn’t work. They will go 50-75 yards and wait for you to get back in the blind then they return to the feed. It can be very frustrating. The plan today however was to bring a second bag of feed (which I did) so after the cows ate all the feed I could run them off and then re-feed for the deer. It was worth a try!

After the cow fed I ran her off and re-fed the depression in the earth. I got back in the blind, ate my lunch and waited to see what would happen. Twenty minutes later the does started trickling back in and seemed glad to find feed after the cows had left. All was going according to plan and I had deer constantly in front of me until 3:20. All of a sudden the 6-8 deer around the feed all started shifting around. That is when I saw the buck enter the area from the hillside. As he cruised through the herd of does they scattered making room for him to get to the feed.

It all happened so fast I wasn’t sure how many points he had. There was at least four good points on the left side and a couple on the right. He was moving around so fast I couldn’t get a good count of the right side but it appeared like he was an eight with possibly a broken main beam. The reason I don’t know for sure is that he no more than appeared when he and all the does and fawns busted out of the area in a mad dash. You guessed it, the cows had returned! That first cow in will never know how close she came to being camp meat….. After the 6-8 cows fed I ran them off and hoped the buck would return. Three does came back but the buck never did. Perhaps tomorrow?

Mark saw a few deer but no shooters and will stay on this side of the mountain tomorrow. Travis had javalinas at his stand all day cleaning up the grain and keeping the deer away. If he had a pig tag it would have been a different story. I think he’ll move tomorrow.

Our “lucky” new guy, Chris, connected on a fine buck this morning, proving that his decision to stay where he was seeing does was a sound one. The heavy eight pointer ran right into a tree after the shot breaking off the G-3 on one side. They looked for the missing point for a long time but couldn’t find it. It’s a great buck even without that point and perhaps the sign of a change in luck for our crew. We’ll see tomorrow.

Not Your Average Treestand