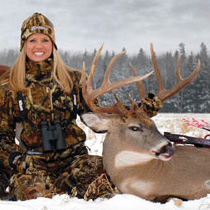 IT HAPPENS TO EVERYBODY at some point. The early season came and went. October’s lull was just that. The pre-rut and rut didn’t quite work out. The gun hunters combed the woods weeks ago. Bow hunting season is down to its last couple weeks. Winter is biting. And you have a tag in bad need of a whitetail.

Growing up in southern Illinois, I didn’t know what it meant to hunt late-season whitetails. When I came to Minnesota, I learned quickly what real late-season hunting was all about. Nowadays, I often end up with an open tag at home, especially after a busy fall of hunting elsewhere.

Whether your home and hunting grounds are Minnesota, Wisconsin, Canada, the Dakotas, Iowa, New York, Pennsylvania, the New England states — anywhere that snow flies and cold settles in — you have to put together a smart late-season hunting approach.

Late-season whitetail hunting is a detail game. You can’t depend on the second rut for reliable action. So hunting becomes a food source scenario. Whitetails will center their lives around the food. It’s mostly afternoon and evening hunting, because it’s so hard to get into your stand undetected in the mornings.

Center your hunt around good scouting, smart setups and low-impact hunting strategies for the best chance at a late-season buck. But any winter whitetail is a good one.

SCOUT SMART
A late-season hunt begins a couple days before you hit the woods with bow and arrow in hand. (The overall hunting approach I’m outlining also works for muzzleloader hunters.)

Scout from a distance to find out what fields or feeding areas deer are using. Visibility is good, with foliage down and snow on the ground. You want snow — and cold — for good late-season hunting.

Park on a back road, field road or ridge and see what the deer are doing without disturbing them. Whitetails get on a pattern. This is probably their most “pattern-able” time of the season, since its earliest days. Study those deer movements and use them to your advantage. Be patient. Figure out what’s going on before setting up a hunt.

Pat and I will hunt over a lot of corn and beans. Standing crops are best because the food is usually above the snow. In harvested fields, the deer have to work to get down to any waste grain. But if snow cover is light, stubblefields are good too.

Use scouting cameras in the places you can’t watch with binoculars. But avoid checking the units too often and alerting the local deer . Check cameras only every few days. Midday is best. Don’t tromp through the woods. Instead, drive up if you can. While you’re there, take a quick look for tracks and confirm any well-used trails the deer are using. That’s one reason snow is so great.

SETUP STRATEGIES
The best food sources to hunt are away from cover. But whitetails will want to use cover as long as possible on their approach. It might be a point of timber, a brushy or grassy swale, a fenceline, a ditch or creekbottom.

Set up on the travel route to the feed source. You want to be on the approaches where deer will pause before heading out. The ideal hunting situation is to let the does and fawns pass, and have them out in the field when the buck approaches. Seeing them out there will give him confidence. Of course, if you’re after venison, shoot that antlerless deer when you can.

Lots of late-season hunting is done on food plots. This can be tough, because food is spread out and deer might come from all angles. If you can control it, put the main food source away from the edge of the timber. For instance, if there’s a corn or bean field, leave any standing crops in the middle (not the edge) so the deer have to travel out to it. This is a great way to force the deer to use funnels, pinch points and cover extensions.

Likewise, if you’re planting brassicas or other cold season food, don’t put them next to woods where the deer can just step out and eat. Put these crops away from the woods so the deer have to use travel funnels to get there.

TREE IT UP OR GET GROUNDED
Hunt out of either a tree stand or a ground blind during the late season. Both have advantages and disadvantages. Trees get you up higher, increase visibility and lift some of your scent above the deer. But they expose you to all the elements, and that makes it hard to sit for several hours. Ground blinds can hide your movements when the woods are bare. Ground blinds also offer some protection from cold winds, and might hold some scent in, but your range of vision decreases.

Set a couple tree stands for different winds. If you can only get one setup, be smart about hunting there only when the wind is right. Your first sit at a spot is usually your best. Wearing whites can help your tree stand chances.

The longer your ground blind sits there, the better. Let the whitetails get used to it for a day or two before you hunt. Brush your blind with natural branches or dried vegetation from the area. For instance, use cornstalks if you’re near a cornfield, cattails on the edge of a marsh, or grass in a CRP field.

One beauty of a ground blind is that you can put it where you want it. While a ground blind can control some scent, you still want to wear scent-control garments. With the wind in your favor, a blind around you and ScentBlocker clothes on, you’ve got “triple” scent protection. That scent-free buffer zone can buy you the time you need on well-educated, late-season whitetails.

APPROACH WITH CARE
One of the hardest parts about late-season hunting, especially in hilly country, is that the deer might be able to see you approach your stand. So we will come in on the truck or ATV, stop with the motor running, get situated, then have someone drive off. The vehicle or ATV usually won’t spook deer. Get there early in the afternoon so that if you push some deer off the field or turn some around that were approaching, they have time to settle down and return.

Just as coming in is a challenge without being seen, so is getting out without spooking the deer if they are out in a field or feeding area. It makes me laugh, but sometimes Pat will bark like a dog when we’re ready to go. The deer will leave the field, and come back later. It’s better to have something “non human” spook them off the feed. Then have a truck or ATV come pick you up.

It takes a dedicated partner to act as driver and pull this off — probably a friend who has his or her tag filled and is willing to help.

GEAR UP FOR COLD CONDITIONS
Drawing a bow when it is cold is not always easy. Nor is getting a smooth release and delivering a quiet, straight-flying arrow.

First, I’ll crank down my bow’s peak draw weight by 10 or so pounds. It’s harder to draw a heavy bow when your muscles are stiff after sitting for two or three hours. Also wear an arm guard so your bow string doesn’t catch a sleeve.

Practice shooting in cold conditions. At home or camp, go outside, draw your bow and sling a few arrows before you leave for the afternoon’s hunt. This gets the bow’s creaks and groans out a little bit — yours too — and gets you “warmed up” to the conditions.

When you get into your stand or blind, draw your bow again, hold it at full draw, and practice aiming as well. I’ll even do this occasionally during the hunt — but only after taking a good look everywhere to make sure no deer are approaching. The more you’ve rehearsed, the better.

FIND SWEET SUCCESS
Two years ago, Pat and I had hunted our rears off all season in Minnesota. But we just couldn’t seal the deal. I was worn out, with hundreds of hours invested. We had even hunted a few late-season mornings, coming oh-so-close.

We had one afternoon remaining. Checking our cameras, we found a field the deer were coming to. Even better, there was a pinch point where they funneled through a downed fence.

We set up early in the afternoon, and 15 minutes before shooting light ended, it happened. The does came out in the field, and then a buck stepped out, just about 40 yards out, and I put an arrow in him. That buck didn’t make any record books, but he was a Booner to me after all that effort and hard work.

And that’s my final message. Late season is not rocket science hunting, but it is good, old-fashioned hard work. So scout smart. Take care of details. And hunt hard. You can win the winter whitetail challenge.

Nicole Jones is the co-host of Driven TV on the Outdoor Channel.
Article reprinted from Whitetails-Close enough to Kill by F&W Media