A Special Big Bear – This One’s for Dad. Part 1 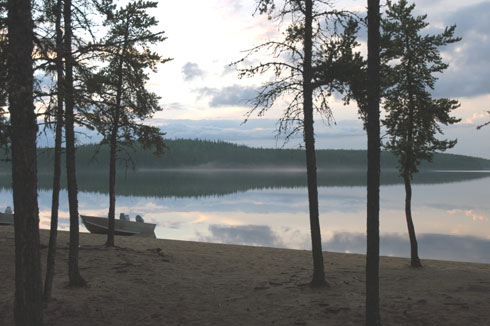 I’ve been chasing big bears around North America for most of my life and have had the very good fortune to put my tag on a few big bruisers over the years. The mission on this northern adventure was to harvest a true monster bear for my dad. He had been failing for the last few months and I was going to cancel this trip. But he knew how excited I was about hunting this virgin spot and told me to go and kill him a big bear. This area hadn’t been bear hunted for the last several years and they had been baiting it for the last two years establishing the baits.

It is this type of location that true trophy bear hunters dream about, it’s isolated and almost untouched by humans. Spring in Northern Manitoba is when the bears emerge from hibernation, and the birds return from their southern journey. The forests explode with life as the countryside seems to come alive. It’s the perfect time for nature lovers, and fisherman, and of course radical bear hunters to be in the outdoors.

The area is a rugged wilderness in a pristine setting. It is home to abundant black bears and some of the best Northern Pike fishing in North America. When your plane starts to descend into the Lynn Lake Airport there’s no mistaking that this is Canada’s true north, strong, free, rugged, silent, and majestic. This is the Land of Little Sticks where even the trees sometimes seem to be struggling against the harsh elements of nature. There are spruce trees the size and scale that look as though they were made for little children. The enchanting beauty from the call of a loon across a tranquil lake on a cool spring night will take away all your stresses. See ecologically significant eskers made of gravel from the remnants of glaciers from centuries ago that serve as proof of the forces of nature. See the transition between the Boreal Forest and the Northern Tundra. No ringing phones will distract you up here. No traffic jams to keep you from where you’re going. At night, you’ve got a perfect view of the canopy of stars overhead. In the Lynn Lake area it’s a different kind of hunting trip, on you will never forget.

Located at the end of Provincial Highway #391 the community of Lynn Lake was carved out of the Northern Manitoba wilderness to serve a nickel mine. The history of Lynn Lake is unique and fascinating. Who else can say they visited a town that moved? Lynn Lake was a mining town built in the early 1950’s from homes moved from a community called Sherridon 150 miles south ,over lake ice and winter roads. The trail, with over 50 portages, passed over frozen muskeg and lakes, through bush and ravines. Because of the terrain, the road was only useable between freeze up and spring thaw. At other times of the year, the land overflowed with water causing anything crossing it to sink deep into the muskeg, and rendered unable to move. All the mines have closed down now and there are just over 500 residents in the community at this time.

I arrived at my final destination in a single-engine Beaver with floats. Golden Eagle Lodge is located on Sickle Lake, which is approximately 40 air miles from the Town of Lynn Lake. Golden Eagle is one of those places that make up the final frontier of Canadian bear hunting. Lodge manager Jason Dyck greeted us as we exited the float plane. The main lodge overlooks beautiful, unspoiled Sickle Lake. That made me want to grab my flyrod and wet a fly right away. Jason and I seemed to hit it off right from the start, swapping bear stories we had experienced. He reminded me of myself when I was young: all business and really dedicated to producing results for the clients. Golden Eagle runs a small operation that prides themselves on quality rather than quantity when it comes to bear hunting and fishing. They have a vast amount of land to hunt but only take a few hunters every year to insure that the quality trophy bears are taken every spring. As a matter of fact, I was only the second and last hunter for the year. The first hunter was a woman bowhunter who passed on several animals before killing a bear that almost stretched the tape to seven feet nose-to-tail on her third day.

Sickle Lake is fifteen and one-half miles long. Jason suggested I stay at the Keewatin Point Outpost Post Camp which is near the mouth of the Keewatin River because it would save transportation time back and forth as the lodge was at the extreme other end of the lake. He had a number of established baits in the area and there was a real monster coming into one of them from the sign he was seeing every few days. Jason suggested I spend the morning with him looking at the baits and we could then determine which ones to hunt.

Every one of the six baits we examined had been hit. But there were two baits we both really liked. Both of them were in tight dark locations less than 200 yards from the lake’s edge. Because of the location we decided to hunt the one that would give the best wind direction to the bait from the treestand each day. I had a very optimistic feeling about these baits. They just looked like big bear spots. Places were the bears would feel comfortable moving in and out of during daylight hours. I was getting really energized after seeing these two locations and all the big bear sign around them.

To the inexperienced, hunting spring black bear over bait might not appear esthetically gratifying or fair, but believe me it is a tremendous experience. Any bear that is baited is not a pushover. This is especially true of the trophy bruins over seven years old. They hit baits infrequently and many times it’s well after legal hunting hours are past. Big guys always circle a bait checking the wind and ease in with all their senses revved to the limit. These big old boars are anything but simple to get a shot at.

I’d been sitting in my treestand for over five hours on the first night without seeing a thing, thinking about my dad and praying I would be able to come through for him with the big bear he asked me to get for him. Then, seemingly out of nowhere, appeared a snowshoe hare and her brood of young. They all started feeding around the bait. Instantly I thought what a place for a bunch of hare to hang out and have a bite to eat. If a bear came into the bait they could be the meal. They were still feeding at the end of shooting light and a bear never showed, thank God for them. I climbed out of my stand and walked to the pick up point.

The next two evenings on stand were still and very quite with no activity. As I sat on stand my mind kept reflecting back to the past fishing and hunting trips with my dad as a kid. Several times I had to hold tears back because I realized he wouldn’t be with me much longer and I was having difficulty dealing with that fact. He is a special person and I love him dearly. I also started to realize this was day three and I hadn’t seen any movement at the baits. Jason had told me this evening on the way into the bait that all the other baits had not been hit either. Something was wrong.

I have seen this happen several times before in other places in the spring of the year. Usually it means that a favorite natural food source has become available and the bears will shut down on the baits for a week or so before returning. This could be a major problem because I only had three days remaining on this hunt. Jason and I would have to put our heads together and develop a plan for the balance of the hunt to try and ensure opportunity if not success.

We discussed the situation on the way back to camp and decided to put a couple Cuddeback digital scouting cameras on each of the two baits that night. We agreed that the bears must be feeding on some natural food source that was available and that was the reason they were not hitting the baits. So we decided to hang a new beaver carcass high in the air at the baits, hoping they would wind the odor and come into the baits again.

The next evening as I sat in stand waiting for something to happen and thinking about my dad I heard something behind my stand. I very slowly turned my head catching a glimpse of the pumpkin sized head of the monster slowly circling behind the bait. He never came into the bait and I only had about twenty minutes remaining of shooting light. On the trail to the left of the bait I caught movement out of the corner of my eye.

It was a large black Timber Wolf sneaking into the opening of the bait area. As he entered he looked around and stopped, looked directly at me in the stand and stared at me with his bluish green eyes. It gave me a real eerie feeling as though he was looking right through me. Then he suddenly walked past the bait opening and disappeared. By now shooting light was gone and I had to descend to meet Jason at the pick up point. But I was wondering where the wolf had gone in the darkness of the night.

I heard Jason coming to the pick up spot with the boat in the stillness of the night. I carefully got out of the stand and briskly walked on the path to the pick up point with an arrow nocked. I was excited and told Jason my story of the happenings of the evening.

Time was counting down and we only had two days of hunting to get that big bear. Then on the next afternoon the wind really picked up swirling in several directions like a front was coming through the area. Well, it was time to go out to the stand for the evening hunt the wind was actually howling. It had just begun to spit rain. Jason and I looked at each other and shook our heads in disappointment. We both knew from experience that with that wind the bears would not move much. On top of that, the way the wind was blowing off the lake; it would be blowing across my back into the baits. Disappointed but resigned to let the baits sit for the evening, I did some pike fishing.

A Special Big Bear - This One's for Dad Part 2